We’re not going to take a position on whether the numbers in the JMC Analytics poll the Rob Maness campaign released yesterday on the House District 77 race (District 77 is John Schroder’s old seat; this is a special election to replace him since he resigned to run for Treasurer) are an accurate reflection of where it sits, because if we had to take a position we would say what we know about all of the electoral races this year, including that for treasurer, mayor of New Orleans and the Public Service Commission seat in Baton Rouge. Namely, that nobody is paying attention yet and the electorate isn’t engaged at all.

Put a different way, none of these races have really started yet. We’re just a few days out from Labor Day, and for anything other than governor or the congressional seats, it’s tough to get the public to care.

That said, Maness has a very high name recognition for a state legislative candidate and in what would be the early days of the District 77 race it would make sense for him to have a lead. The JMC Analytics poll says he has one. 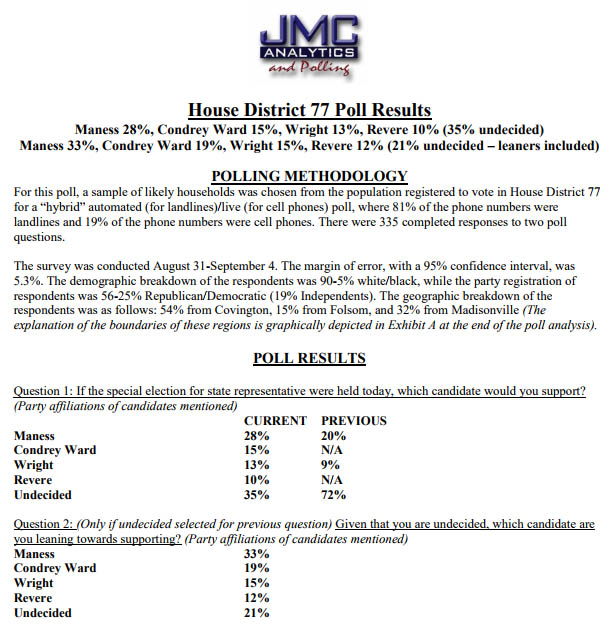 Lisa Condrey Ward is the Democrat in the race, though she’s running as an independent. Condrey Ward has some interesting donations to political candidates in her history – for example, the $750 donated by Ward & Condrey, the law firm she’s a partner in, to Mitch Landrieu and the $10,500 that firm gave to John Bel Edwards. Or the $1200 she’s given Mary Landrieu over the years, the $2,000 she gave Charlie Melancon back in 2010 or the $333 donations she gave to Robin Carnahan, Patty Murray and Blanche Lincoln.

Anybody from Louisiana who gave Patty Murray money is lying if they try to sell themselves as anything but a partisan Democrat. So that’s Lisa Condrey Ward, who somehow has the backing of St. Tammany parish president Pat Brister. Brister has an “R” next to her name, for the same reason Ward won’t put a “D” next to hers. According to JMC’s numbers, she gets pounded in a runoff – 51 percent of the vote goes to one of the three Republicans and only 15 to her, with 35 undecided, and the undecideds lean 60-19 against her.

Meaning that Maness and Mark Wright, who’s a well-liked Republican activist in St. Tammany and who is the most likely candidate to show growth between now and Election Day, are in competition for a spot in the runoff against Ward – and it’s also likely whichever one of them makes that runoff will win it.

Right now that’s Maness, according to a poll that, to be fair, he commissioned. Time will tell if this poll, or its numbers, hold up.

Interested in more national news? We've got you covered! See More National News
Previous Article Tommy The Torch Didn’t Pay A Visit To The Sewerage & Water Board Yesterday, Did He?
Next Article Get All Your Great Hayride Gear At HayrideMerch.com!