As some of you may know, I previously wrote a for Uptown Messenger, a local news website in New Orleans.  One of my favorite pastimes there was chronicling the crumbling infrastructure of the city and the seeming indifference of the Landrieu Administration to fix it.

Case in point: Back in December of 2014, nearly three years ago, I wrote a column regarding a collapsed section of street on Coliseum at Josephine Streets near my home in the Lower Garden District.

It was evident that there was a broken drainage line or something similar that was causing the street to sink.  The city had previously repaired the roadway, but not the underlying problem. At the time, the Sewerage and Water Board had apparently started work at the location, but never made complete repairs.  Eventually, following months of inaction, the entire roadway became impassible.  One car even became stranded in the resulting sinkhole.  I took a photo of the grisly situation: 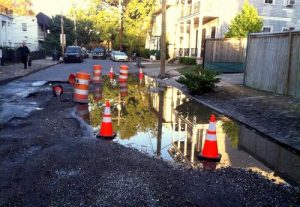 The same day my column ran, the site was filled with gravel to make it passable again.  Not long after, I noted that it was paved over again with asphalt.  There was still a pronounced slope to the roadway, but at it was relatively smooth and intact.

“Huzzah!” I thought. “My complaints got results!”

Alas, I was mistaken.  Although the Sewerage and Water Board had worked on the site and dug up the roadway, they apparently did not actually fix whatever was actually causing the roadway to sink.  Less than three years later, the asphalt has sunk further, to an extreme degree, and is again on the verge of collapse.  This is a photo of the same site I just took this morning: 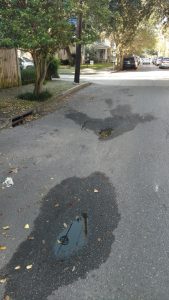 Just before I took this photo, the car in the distance literally bottomed out as it passed.  This is noteworthy, as a study released earlier this year estimates that bad roads such as this cost motorists an average of $672 per year. That’s not chump change.  The storm drain to the left is also not functional, so after it rains, the entire left side of the street is a gigantic pool.  Localized flooding is common.

In short, the Sewerage and Water Board didn’t really fix anything.  Ostensibly, all that happened was that the street was asphalted over again — for the umpteenth time, a cosmetic repair was performed to hide the rot underneath.

To top it off, on my way back, I noticed a broken water line less than 100 feet away spewing water into the street.  The water and drainage infrastructure in my neighborhood is constantly failing, and when confronted with problems, the issue is simply concealed — not actually repaired.  This is a classic case of passing the buck and hoping the blame falls with the next guy.

Now, Mayor Landrieu would have us believe that this isn’t his fault, because money is scarce and the Sewerage and Water Board is a separate entity from the city.  However, that simply doesn’t wash.  Nearly five years ago, back in 2012, the city passed massive increases in water and sewerage rates in exchange for a “reform” package that consolidated the mayor’s control over the Sewerage and Water Board.  In other words, Landrieu received more money and more control.

Now, as Mayor Landrieu’s Administration is at its ebb, we now know what Landrieu did with that power — virtually nothing.  New Orleans endures repeated boil water advisories and a pumping system for storm water that is constantly failing.  And instead of repairing drainage lines, the Sewerage and Water Board apparently has just been paving over them.

Last year, I wrote that “[t]he most appropriate metaphor for Mitch Landrieu’s tenure as mayor of New Orleans would be a sinkhole.”  As New Orleans prepares to elect a new mayor, and the national media begins to look to Landrieu as presidential timber, voters should remember Landrieu’s legacy.

After all, we don’t need another “Mayor Sinkhole.”