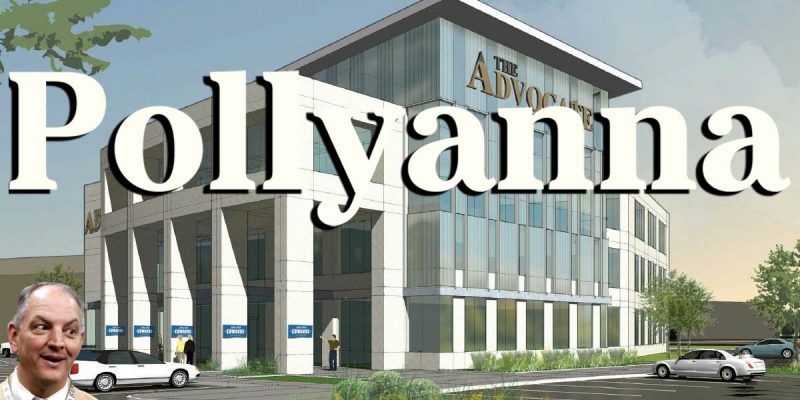 Here’s a headline at the Advocate today which folks who believe that paper is hopelessly in the tank for John Bel Edwards will see as evidence they’re correct: “Lake Charles, Alexandria see major GDP growth.”

Hey, that sounds pretty good, right? Nobody ought to be surprised that the Lake Charles gross domestic product numbers would be good, given the billions of dollars being invested in building and expanding petrochemical facilities, like LNG export terminals and Sasol’s massive gas-to-liquids plant, there. And Lake Charles’ GDP increased by 8.1 percent from 2015 to 2016, which ranked atop the list of 382 metro areas surveyed in the Commerce Department’s Bureau of Economic Analysis study released yesterday.

In fourth place was Alexandria, which grew by seven percent. Nobody seems to know why.

But the rest of Timothy Boone’s story tells a little less positive story. OK, let’s be honest – the rest of the data in this study is devastating to Louisiana’s tale of economic performance last year.

At the same time, two metro areas heavily dependent on the slumping oil and gas industry took big leaps backward. The GDP generated in Lafayette was down 11.5 percent, which put it at 380 out of the 382 metro areas surveyed. Houma-Thibodaux was down by 10.4 percent, at 379 nationally. Only Casper, Wyoming, which saw its GDP fall 11.6 percent, and Odessa, Texas, with a 13.3 percent drop, fared worse. Both cities also are heavily dependent on the oil and gas industry.

Of the metro areas surveyed, 267 reported an increase in GDP. Shreveport-Bossier was the only other Louisiana city to post a drop, 1 percent ranking 310.

Those are terrible numbers, and while much of Louisiana’s bad economic performance can be put on the oil and gas collapse swamping the Lafayette and Houma/Thibodaux economies, those are not the state’s three biggest markets. New Orleans, Baton Rouge and Shreveport area, and none of them ranked in the top 200 out of 382, and none of them grew by more than 1 percent.

You could certainly make the argument that having only three of the state’s nine metro areas above the national average in 2016 economic growth is a bad statistic, and that it’s not an accurate portrayal of the truth to highlight the positives in Lake Charles and Alexandria’s numbers in a headline and a story lede while leaving out the bad news. Certainly one wouldn’t have expected such positive spin put on economic news when, say, Bobby Jindal was Louisiana’s governor.

We know this, because back in 2015 there was this Advocate headline: “Louisiana economic output grows 1.9 percent in 2014, below U.S. average.” And in that story, you find out Louisiana’s 2014 GDP figure ranked 19th out of 50 states (and Washington, DC) ranked, plus Louisiana’s GDP growth outpaced that of the Southern average and beat all of the state’s neighbors other than Texas despite some pretty major cuts to the state budget that year (it was in 2014 that all of the Charity Hospitals were privatized, after all). Louisiana’s public sector shrank more than any other state in the union in 2014, and yet the state still outpaced the Southern average and 32 other states in economic growth.

Now it’s that Lake Charles and Alexandria boomed in 2016, despite the fact the rest of the state is in the doldrums and the fact Louisiana lost more median income than any state in America last year while its government was getting fat on taxes to such an extent that it ended up running a $100 million surplus for 2016-17.

That’s pretty favorable press coverage of the governor, no? How do you think a Jindal, or Vitter, administration would have fared in an Advocate story with those 2016 metro GDP numbers?