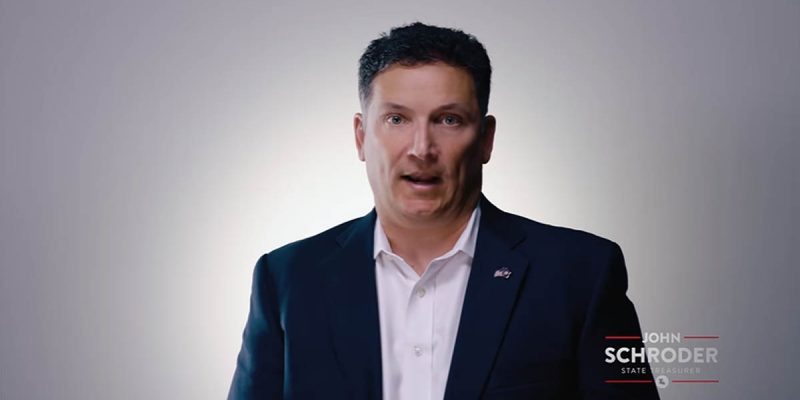 Look, we check out our site traffic numbers multiple times a day, and we’ve noticed that our readers are about as interested in the Treasurer’s race between Neil Riser, Angele Davis, John Schroder and Derrick Edwards, plus a couple of other people nobody’s ever heard of, as they are in the migration patterns of the Kirtland’s warbler or the latest developments in Outer Mongolian feminist philosophy.

We get it. Nobody’s paying attention, nobody cares.

So Schroder has a new TV ad out, and this is it…

That’s an ad which is of a piece with the Covington state representative’s long-standing mantra about how Louisiana doesn’t prioritize its budget properly and lacks fiscal discipline. We’d give him credit for doing the best job of anyone in the race in discussing something akin to what the state treasurer actually does – Riser is spending a lot of time talking about the NRA and guns, and Davis is touting how much she likes Donald Trump as president.

Of course, the Treasurer has zero power to affect Louisiana’s fiscal policy, so the argument could be made that Schroder is just pushing a little different version of the “Look at me!” act all the candidates are showing off.

That’s not a criticism. If somebody actually ran for Treasurer based on the minutiae of what the State Bond Commission does or what a kick-ass job they’d like to do to process all the swag in the state’s Unclaimed Property repository, nobody would vote for them and you’d have a hard time blaming the voters. What the state treasurer in Louisiana does is BORING.

Ergo, the lack of voter engagement.

Will this ad work? We have no clue.

What Schroder is saying sounds like something most Louisiana voters would buy, though he’s showing off a good old-fashioned New Orleans Yat accent in saying it. Is that an issue in this race? Our theory is that west of I-55, a thick Big Easy brogue is a tough sell – people in Baton Rouge don’t like it and people in North Louisiana really don’t like it.

Now, you could say that if you can’t get elected with a Yat accent, then how do you explain Billy Nungesser as the Lt. Governor and Tom Schedler as the Secretary of State? That’s valid, but then again Nungesser got elected because he edged past John Young, who was the president of Jefferson Parish, dawlin’, into a runoff with Democrat Kip Holden and Schedler won election in a 2011 race over Jim Tucker from the Westbank. Schroder’s accent is probably the thickest in state politics since Walter Boasso, whose brogue was so pronounced it was comical, ran for governor in 2007 against Bobby Jindal and got throttled.

This race is a little different, in that it pits Schroder, the Yat, against Davis, the Baton Rougean judge’s wife and former Jindal bureaucrat who grew up out in the country in Clinton, and Riser, the good ole boy from Columbia up in the northern part of the state who owns a funeral home (you can’t get much more William Faulkner Southern than that). If the Yat accent doesn’t sell this is a test of it and we’ll find out, because Schroder’s ads don’t hide the accent. 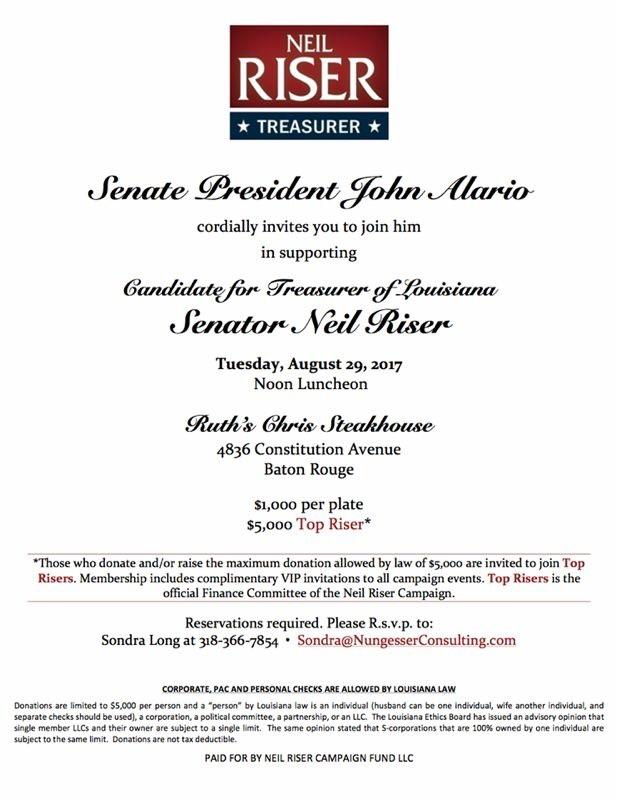 Riser’s folks might ask what the big deal is, since John Alario is the Senate president and Riser is in the Senate. Why wouldn’t he have Alario throw a fundraiser for him? After all, Alario is in the New Orleans area, and Riser’s campaign clearly is chasing votes in New Orleans – which is eminently sensible, as it turns out, given that the only place in the state where voter turnout isn’t expected to be atrocious next month is Orleans Parish on account of the mayor’s race there. So if he can get Alario to raise some money for him and help him win, it’s good sense.

The flip side of that is if you’re a Republican Alario pretty much has to disgust you given that he’s been a ringleader of crooked politics in Louisiana since just after Jim Morrison died in his bathtub, and of more recent vintage Alario is a sockpuppet for John Bel Edwards for everything from irresponsible fiscal policy to standing in the way of historical landmark preservation. Getting in bed with him could irritate some folks.

Riser’s calculation, though, is those folks don’t really care enough to show up and vote, while some of his new friends are more likely to turn out. We really won’t know who’s right until Election Night.

And even then, it’s a good bet not a lot of people will care.