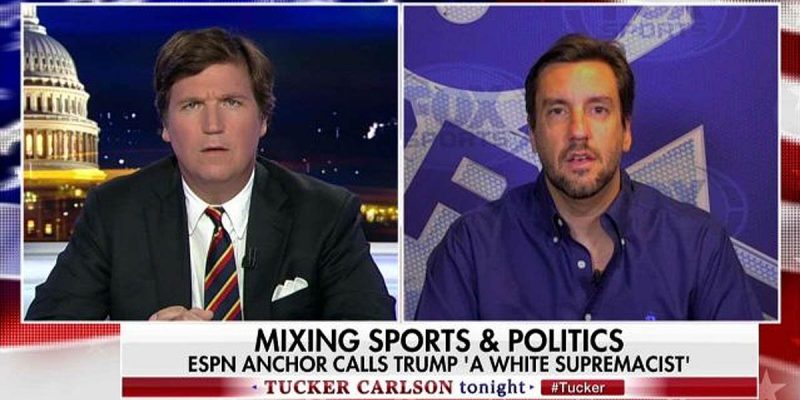 …and the result was definitely something to see. Travis, whose website OutkickTheCoverage.com has essentially melted its computer servers today (we tried a couple of times to reach it this morning, to no avail), is a Fox Sports personality – so he has a little bit of a profit-making motive in trashing ESPN and that adds a special flavor to his criticisms of the network.

But none of that makes him wrong. And his thesis, which is that ESPN is already under a lot of pressure do to an outdated business model and the unfavorable changes to the sports-television marketplace which are compounding those problems and has sought to deal with those challenges by injecting cultural marxism and politicization of every program on its air, continues to be proven correct time and again.

Yesterday we had a post about ESPN’s ridiculous Diversity Bowl sportscast of the Broncos-Chargers game and the comic swing-and-miss that was Mexican-American millennial sideline reporter Sergio Dipp’s Monday Night Football debut; that was hard to beat as a perfect example of our own thesis, expressed Monday at the American Spectator, that if you allow leftists to take over a cultural institution you will soon by struck by the proliferation of manifestly unfit and thoroughly incompetent people within that institution.

ESPN wasn’t mentioned in that American Spectator column; they might have to be mentioned in a follow-up entry in that space, because if the Sergio Dipp failed launch wasn’t enough to peg the sports network as a cultural institution taken over by leftists and overflowing with toxic losers the Jemele Hill disaster which followed just hours later surely was.

Hill, who co-hosts ESPN’s flagship SportsCenter show with Michael Smith, came up as a newspaper sportswriter. She’s worked for ESPN since 2006. She wasn’t fired for a comment she made back in 2008 equating rooting for the Boston Celtics with saying Hitler was a victim, though she was suspended for saying it – and if you’re struggling to unpack that one, the essence is that all the racist white people grew up rooting for the Celtics because Larry Bird and Kevin McHale were white dudes, and thus all the racist white people have a soft spot for Hitler. So that’s what ESPN has been promoting for the last decade, and since February she’s one half of their flagship SportsCenter show – which by the way no longer focuses on highlights of football, basketball and baseball games but instead is a platform for Hill and Smith to rap about whatever they please.

And on Twitter yesterday, it pleased Hill to attack the president and the 60 million or so Americans who voted for him by saying, “Donald Trump is a white supremacist who has largely surrounded himself w/ other white supremacists.” There was a whole lot more, and it got considerably worse from there.

Hill frequently says dumb things like that. She called it “historically accurate” when Colin Kaepernick, whose cause she has been championing with fervor, declared that American police forces originated as fugitive slave patrols. She also, just Sunday, attacked Kid Rock’s kids after he had expressed indignation over being accused of racism by tweeting, “Would love how he explains to his black children why he loves the Confederate flag.” Also there was a famous tweet last year, after a jihadist shot up the Pulse gay nightclub in Orlando, and Hill had this to say: “So in a country where we have done everything possible to undermine the LGBTQ community, we are suddenly lecturing Islam on homophobia. Oh.”

So this is a social justice warrior who can’t shut up about politics when it’s manifestly clear based on all the market data available for anyone to see that the bulk of the potential audience ESPN has depended on since its founding wants for sports to be an escape from politics and is willing to punish people who can’t respect that wish.

And ESPN’s response to one of their main on-air personalities setting fire to the network’s viewing audience (or better put, fueling that fire, because ESPN set it a long time ago), was a tweet…

Needless to say that isn’t likely to stop the bleeding. So last night, Tucker Carlson had Travis, who, again, has been on top of the left turn at ESPN all along and has been pointing out how dumb it is to alienate half the country (particularly when that half has more interest in sports, on balance, than the other half) when it’s completely unnecessary to do so, on his show.

Needless to say, there were truth bombs exploding for the entire segment. Here’s the video…

By the way, at Travis’ site he has a story that was leaked to him by angry ESPN employees that when Linda Cohn, who’s been a respected on-air personality at that network for 25 years, went on the radio in New York to admit that left-wing politics are causing problems at the network, she got a call from ESPN president John Skipper screaming at her and telling her not to come in to work so she could “think about what she said.”

Interested in more national news? We've got you covered! See More National News
Previous Article Hillary Clinton Has Officially Offended The Democrats
Next Article What Exactly Is DACA And What Does It Take To Apply