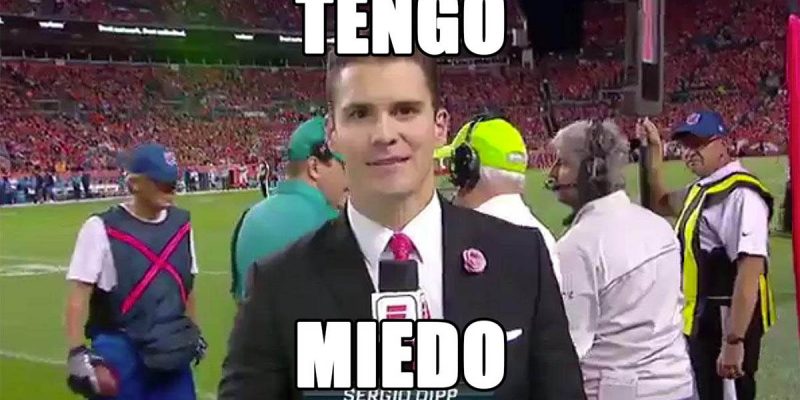 If the pathetic performance by the Saints in the first installment of Monday Night Football last night didn’t scare you off and you subjected yourself to ESPN’s all-time-worst sportscast of the Broncos-Chargers game in the second installment, you’ll know who Sergio Dipp is; otherwise you’re likely to wonder who in the heck we’re talking about.

For the second group, Dipp is a 29-year old Mexican American who somehow landed a job as the sideline reporter for ESPN for the Monday Night Football B-crew – and “B” is generous, as Beth Mowins and Rex Ryan in the broadcast booth were so bad it was comical. But as bad as Mowins’ Midwest whine and Ryan’s machine-gun “ums” were, nothing could have prepared the audience for when the camera was put on Dipp…

It’s one thing to be stammering and freezing up on national TV. That’s certainly possible. But here’s the thing – it you get past that and focus on what Dipp was trying to say, it doesn’t get any better.

He’s being asked to contribute something to the broadcast, and what he has to offer is that both teams have black coaches making their debuts as head coaches in the NFL, just like he’s a minority guy making his own debut.

First of all, you’re the sideline reporter. Nobody cares about you. Sergio Dipp? Who is that? Contribute something to the fans’ knowledge – how’s the guy who just got hurt doing? Is Tracy Siemien picking up the safety blitz and audibling to a hot route? That you’re a Mexican dude who got a job as a sideline reporter is interesting to precisely no one who isn’t Mexican, and there aren’t all that many Mexicans watching Monday Night Football (and the ones who are probably don’t care about Sergio Dipp either). They’re here to watch football, not to watch you stumble through a sideline standup.

And second of all, if you’re going to give some grandiose political speech about minorities getting opportunities and you don’t want to suck, then WRITE IT DOWN and refer to it when you freeze up.

Instead, we got the worst of all worlds – content-free drivel, delivered poorly by somebody who clearly made himself out to be a diversity hire promoted far beyond his talents thanks to his ethnicity.

Naturally, the internet has turned Dipp into a figure of fun, which is what should have happened – though it’s ESPN, which is the worst-run network on television, who deserves most of the ridicule. After all, this is a network which ran Ed Werder off over the summer in order to hire ¡Muy aterrorizado! over here.

And whoever was producing that hot mess from Denver took one look at Dipp’s performance and decided maybe it was a good idea not to worry about a sideline report for the rest of the game. That was it for Sergio, as he was sent to the showers. ¡Hasta luego!

All of which prompted this even more painful clip, courtesy of Dipp’s Twitter…

Nope. He still doesn’t get it. It’s like he’s the Hillary Clinton of Mexican sportscasters.

You’re there to do a job, amigo. Focus on doing your job and you might do it serviceably well enough that they’ll let you keep doing it.

Interestingly, if you turned off the volume and just watched the game, both Denver and Los Angeles put a pretty good product on the field. Vance Joseph’s Broncos got out to a sizable lead thanks to some more or less flawless football over the first three quarters, while Anthony Lynn’s Chargers mounted a furious comeback that fell just short when field goal kicker Younghoe Koo, who’s Korean, had what would have been a tying field goal blocked.

Meaning that neither Joseph nor Lynn were focusing on “having the time of their lives” in Sergio Dipp’s dippy formulation – they were busy putting a quality product on the field. Both looked a hell of a lot more prepared to play than the Saints’ Sean Payton did in that humiliating performance in the early game.

But this was just one more catastrophic blunder by the buffoons in Bristol, who simply can’t even get basic things right anymore. Are there any adults in charge at ESPN, or can we add them to the list of cultural institutions taken over by the Left in which incompetents and the manifestly unfit flourish?

Interested in more national news? We've got you covered! See More National News
Previous Article VIDEO: What Are They Learning At Tara High School In Baton Rouge?
Next Article Will Wade Just Landed Naz Reid, And LSU Basketball Is Officially Back In Business