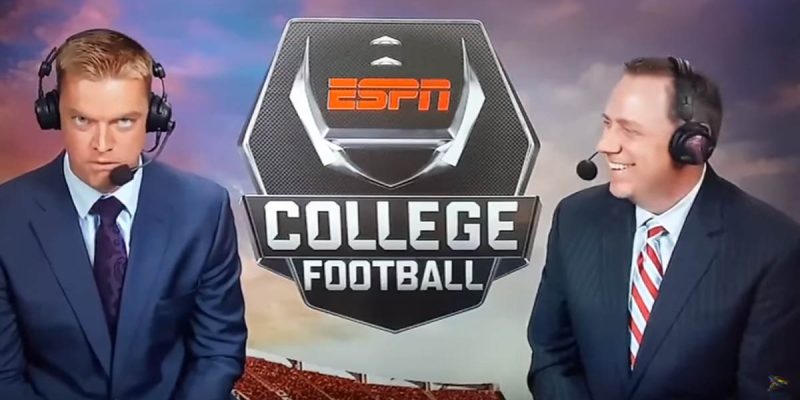 We’re not going to do the politically correct/safe space thing here, because there’s nothing we hate more than a whiny snowflake. But one of the more eye-popping examples of what the social justice warriors might call ethnic bias made itself known on Saturday during ESPN’s broadcast of the LSU-BYU game when the announcers, and even some other college football coaches who had made their way to the network’s studio in Bristol, Connecticut over the offseason, were shown doing some not-all-that-complimentary impressions of Tiger head football coach Ed Orgeron’s accent indicating he’s one of those Cajuns from down the bayou.

Most of those impressions were weak, of course, but Allison Williams’ “one team, one heartbeat” impersonation was pretty good.

Are they funny? They’re not uproarious, but sure – Orgeron’s Cajun accent is unconventional, at least nationally speaking, and we all get a kick out of it.

Everyone knows that Cajuns have the best Cajun jokes, after all.

But the ESPN impersonations didn’t sit all that well with the LSU community. Tonight, on Orgeron’s weekly radio show, a caller asked the coach about the impressions and it generated something of a curt response…

"Proud to be a Cajun, that's all I'm going to say," O says when a caller brings up the ESPN imitations of his voice.

Orgeron isn’t exactly someone at a loss for words, generally speaking. Such a short answer is a pretty good bet that he’s not pleased.

And while we all want to laugh about the impressions, and while it’s poor form to insist that ESPN act in as politically correct a manner toward Orgeron and those sharing his ethnicity and culture as the network has enforced on, for example, Curt Schilling when he posted a Facebook meme critical of the transgendered, there is a point to be made here.

Which is that if Orgeron was from, say, New Orleans rather than Cut Off, and if Orgeron came from an African heritage rather than a French one, nobody would dare make fun of his speech. Or if he was Ed Aziz, or Ed Ramirez…

If this is really a problem, the coach’s way past it is to win – and to win so much that what’s interesting about him is that he wins and not that he’s got a gravelly Lafourche Parish cadence.

For the rest of us, though, it’s notable that it’s fine to have some fun at the Cajun’s expense on ESPN’s air. Anybody else as a victim, though, and the suits in Bristol will have you out of a job within 24 hours.

Interested in more news from Louisiana? We've got you covered! See More Louisiana News
Previous Article APPEL: John Bel’s Manufactured Crisis
Next Article Tommy The Torch Didn’t Pay A Visit To The Sewerage & Water Board Yesterday, Did He?