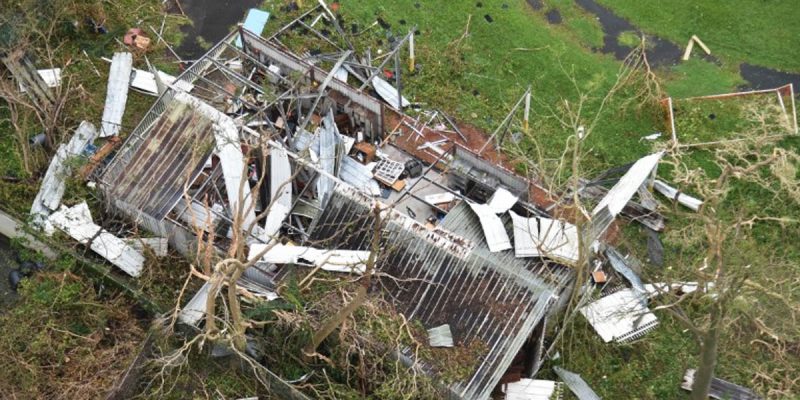 This video is from NBC News, which had a crew in San Juan yesterday to film the aftermath of Hurricane Maria – which did a major amount of damage on Puerto Rico. It turns out that the entire Power infrastructure in that island territory is down. The whole place is without power, and may be for months.

And most of the roads are undrivable thanks to trees being down everywhere. Plus, flooding and everything else associated with a major hurricane coming through.

And the rain. Lots of it. Almost Harvey-style rain, in much less time.

In just 24 hours, Maria dumped almost 40 inches of rain on parts of Puerto Rico, where millions of residents won’t have power for months. Most of the island saw more than a foot of precipitation as Maria turned streets into raging rivers.

Houston took almost 50 inches of rain from Harvey, but that was over five days. Puerto Rico got 40 inches in 24 hours.

Which is a very hard rain.

Many Puerto Ricans spent Thursday cleaning up. A man in the La Perla area of San Juan told CNN he still had his faith. “It’s incredible … but I believe in God, and we can do anything with the help of God,” Roberto Caballero said.

CNN teams in San Juan saw that some shops were open. All had long lines.

Maria has brought misery to many Caribbean Islands and death to Dominica, where at least 15 people were killed when the storm passed earlier this week, according to Prime Minister Roosevelt Skerrit.

They’re saying that the Maria damage in Puerto Rico alone will amount to more than $30 billion, which means Congress will have another aid package to vote on before the end of the year. President Trump, who was on the phone with Puerto Rico’s governor yesterday, has approved a disaster declaration for the island and will be surging FEMA to the recovery effort. Trump is also making a visit to San Juan in the next few days.

Is this thing going to hit the continental U.S.? It’s too soon to say, but the latest forecast track has it peeling off into the Atlantic. Hopefully, when it’s done with the Turks & Caicos islands, we’ll have seen the last of it.