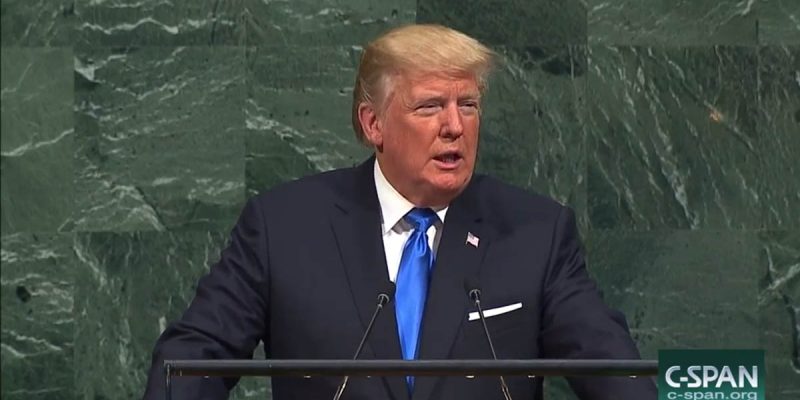 Today The Donald made the trek to Turtle Bay in order to address the United Nations for the first time, and the UN braced for what was likely to be an unconventional experience. They got more than they bargained for, as Trump regaled the crowd for 42 minutes of what can best be described as extreme frankness.

Most of the time when US presidents and other world leaders address the UN, they do so respecting the pantomime of globalist unity which is expected in that hall. Not Trump. He came right out and said it – it’s the duty of the American government to put the American people first, and under his administration that’s what it’ll do. He said all the governments represented in the hall do – and should do – the same.

Trump also held out three basic duties all governments should embrace to provide for their people: sovereignty, security and prosperity. Trump departed from the Bush-era formulation which held that at the end of the day what everybody wants is American-style freedom; he more or less gave up on that since it’s pretty obvious much if not most of the world either doesn’t care about that or won’t fight for it in their own countries. But in talking about sovereignty Trump made the case that the people of the countries in question are sovereign, and therefore if the governments aren’t necessarily democratic they should at least be responsive to the interests of the people.

Which is where he jumped off into calling out the worst of the world’s sons of bitches.

Starting with North Korea, which Trump blasted like perhaps no other country has been blasted before in that hall. Trump specifically named Otto Warmbier, the University of Virginia student the Kim regime killed in captivity, as a victim of that regime, and threatened the Norks with destruction if they keep pursuing a nuclear missile program. The rhetoric was so hot that he called Kim Jong Un “Rocket Man” in a derisive reference to his burgeoning missile program.

Trump didn’t stop there. It was on to Iran, where he spared no invective in accusing that regime of being frightened of its own people only slightly more than it is of the American military. And to Venezuela, which Trump said was not a failure due to poorly implemented socialism but socialism faithfully implemented. Trump called out communist regimes as a whole as failures, which raised a loud murmur in the crowd – thus putting to bed any question whether the UN is a socialist enterprise.

From there he trashed international terrorists as losers, which drew smirks from the American delegation, and implored the people of the world to rediscover pride and patriotism in their countries and to demand their own interests be served – which is an encouragement to European voters to demand their governments stop open migration from Third World countries before it leads to their cultural annihilation.

“It was the best speech of the Trump presidency in my view. I think he was as clear and direct as it’s possible to be. You listed a number of the key points that he made. I think the centerpiece of the speech was the criticism of the behavior of North Korea and Iran and I think it’s safe to say in the entire history of the United Nations there has never been a more straight forward criticism of the behavior, the unacceptable behavior of other member states. North Korea the president said if we’re forced to, we will have no choice but to total destruction of North Korea.

“I think people will remember that and he made what I think is a key point when he look at what our next steps might be. He said denuclearization is the only acceptable future and that means in his view we don’t end this present crisis with North Korea still in possession of a nuclear weapons and ballistic missile program.”

Just so. Perhaps never has so much truth been told at one sitting in that building. They’ll be talking about Trump’s speech for a long time.