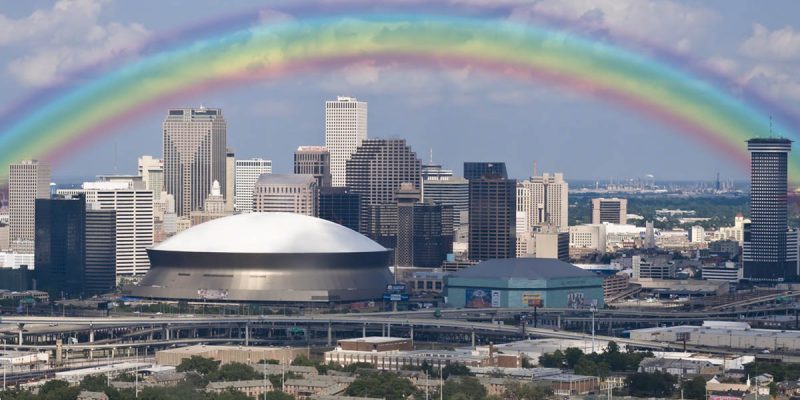 I want to take this opportunity to paint a picture of a future New Orleans. No not a painting on canvas, a painting in the mind. I want to describe a vision for our city/region of what we could look like if we only took a few steps.

Many of you know that I have worked with civic economic development groups in the New Orleans region for more than 40 years. In that time I have seen our region go from a boom-town region, highlighted by expanding growth, to a region that reflects a mere shadow of what we once were; a region then in which numerous Fortune 500 business located here to a region of where we enjoy but one; a region then of diverse economic interests to a region narrowly supported by but a few.

New Orleans was once the Queen City of the South, the Gateway to the Americas, and the economic heart of Louisiana. None of that applies today. The consequences of our failures are the fundamental roots of crime, corruption, poverty, a general economic malaise, and all sorts of other social ills that permeate our society.

Now let me paint a picture of what the New Orleans area could be! Imagine in your mind a region that attracts vastly more people than leave. People that would come here not just because of our reputation for a Bohemian lifestyle; they would come here because we offer a cool lifestyle coupled with the promise of economic security and prosperity. We would be a region in which business flourishes and produces wealth – creating jobs that break the cycle of poverty. We would be a region in which all have an equal opportunity to succeed because success can only be expected where growth creates positive economic potential. We would have a region that once again becomes the Queen City of the South and that meets its potential to produce economic prosperity for the entire state.

No I am not dreaming of something that is inaccessible – because I grew up in such a place. A place where in my early years people flocked here to work and to grow their families. A place where even the least-educated could find decent entry-level jobs that led somewhere and these folks would have a reasonable expectation of making a livable income not having to be locked into jobs with low wages.

Ok, so what would it take to start down this well-traveled road to prosperity? First, a reality shock! We must acknowledge that our political and economic expectations and practices of the last 40 years have failed. We must accept a reality that if we keep doing the same things, or worse, doing more of these failed things, then we will never move forward. Once we accept reality then we can really get moving.

Our first change must deal with a principle well-established many places but not here. Government cannot create or expand jobs, only business can. In our region’s political world government policies have been contrary to the needs of business and therefore we lose business activity to more favorable economic climates. Need proof? Atlanta, Houston, Dallas, Nashville, Miami, Birmingham…. all cities that recognized that attracting business through less government are better and that have prospered as a result.

We have a very long tradition of populist government policies and they must go! Yes, there will be pain because we have developed a citizenry that is overly dependent upon government largesse. However, in the long term, ridding ourselves of dead-end policies will pay off. Here’s the hitch – if we don’t start, we will never get there.

The next major hurdle will be to focus upon the social and economic metrics that we will need in our effort to start up, grow, and attract businesses. We will have to demonstrate a much better school system for all kids. This is not just to help our kids; it is also to demonstrate to businesses that their employees will not have to spend huge amounts of after tax dollars to send their kids to a private school. We must have high-quality public schools; charter or traditional, it makes no difference! If the school boards can’t deliver on their promises then we must solve this problem another way.

We must address infrastructure. Potholes that swallow cars, constant flooding, and needed improvements to port, rail, and highway access must be solved. If this means redirecting budgeted dollars from populist social programs to infrastructure then that must be done in order to create ever more revenue for government in the future.

Lest I say it, crime must be reduced. Much of the root causes of crime are found in poverty and low expectations but in order to solve those issues we must reduce crime. A chicken and an egg scenario to be sure but the only option is to seriously crack down on crime by ramping up enforcement. It will take time to rebuild the economy to a point where our crime rate is affected positively by economic prosperity so serious enforcement is the only short term action available. If that flies in the face of liberal sensibilities then so be it, in order to increase economic growth there is no other way to reduce crime.

There are many more issues but perhaps the one that creates the best opportunity to succeed is simply attitude adjustment. If the political leaders would put down overblown populist rhetoric and make meaningful changes for a few years then suddenly the optimism of the city and region would blossom.

Our business people are our best salesmen. If our people are making money and are able to keep it by not being taxed to pay for all sorts of things that are perceived as useless to them, then they will be empowered to sell our region to their friends, clients, and associates. When that occurs, business growth will feed upon itself and prosperity will follow closely behind. In today’s climate there are very few business people who expect a bright future here. That negative attitude must change and political leaders who place economic growth above government largesse can make it happen, if they really want to.

My mental painting of what was and what can be is one of brightness and hope for all. It would be a shame if our people fail to achieve what they deserve simply because politicians continue to use divisive and negative, populist approaches to governing. I have a different picture in mind for that New Orleans…and it is a dark future indeed.

Interested in more news from Louisiana? We've got you covered! See More Louisiana News
Previous Article We Agree With Samantha Power, And We Share Her Obvious Concerns
Next Article VIDEO: Kennedy Mercilessly Trolls Mitch Landrieu In Hearing With Sessions