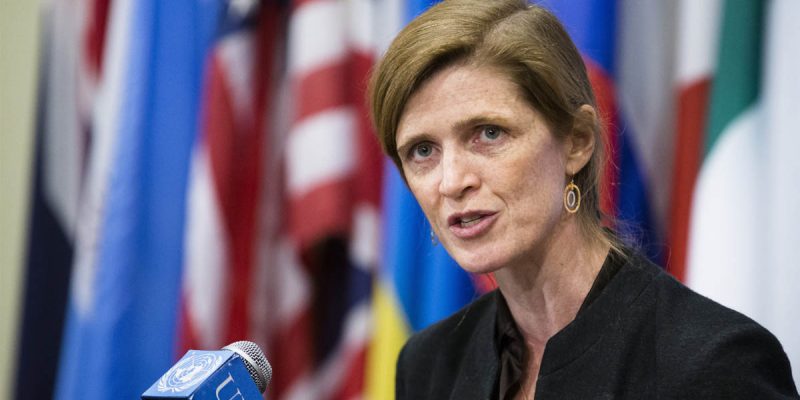 You’ve heard the word coming out of the House Oversight Committee’s hearings on the unmasking of Americans from wire intercepts during the Obama administration, right? One of the most frequent offenders in the requests to effectively spy on her fellow citizens was Samantha Power, who has now essentially resorted to the “I dindu nuffin” defense.

Someone within the Obama administration’s intelligence apparatus made requests to unmask the identity of Americans named in intelligence reports on behalf of Samantha Power, the former U.S. ambassador to the United Nations.

South Carolina Rep. Trey Gowdy revealed in an interview on Fox News on Tuesday that Power was “emphatic” on the point that someone else in the Obama administration made the unmasking requests that have been attributed to her.

Fox News recently reported that Power made approximately 260 unmasking requests — a rate of one per business day — in her final year in office, including up through the end of Obama’s term.

We believe her. After all, we find it highly surprising – suspiciously so – that even a cretin like Power would be so engrossed in the abuse of power as to be asking once a day for a wiretap recording of Mike Flynn or some other American citizen captured on NSA intercepts of phone calls or other electronic communications.

It is much more likely that those 260 requests bearing Power’s name came from a number of people within the intelligence community using her authority.

And while we find that plausible, we also believe it’s highly illegal, as those would be unlawful requests subject to criminal investigation – which would be why they were made under Power’s name, she being a legal requester of those unmaskings. This would be someone hiding behind Power’s skirts to do something sinister and abusive to our rule of law.

So let’s have a full investigation – with a special prosecutor, if need be – and let’s march everyone who could possibly have been involved through deposition rooms and, if appropriate, grand jury testimony. Let’s find out who broke the law, and let’s throw them under the jail as an example to the next set of would-be tyrants abusing their power to spy on their fellow citizens for what in all likelihood were crass political purposes.

And we can thank Samantha Power for her support in this endeavor. She does fully support this course of action, doesn’t she?