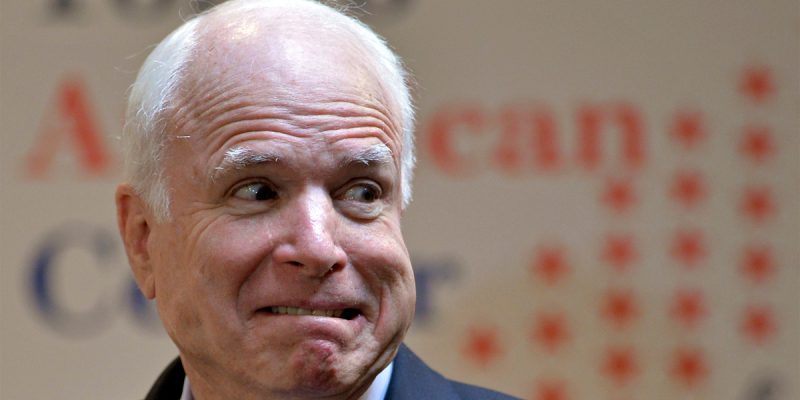 Yesterday, a Fox News reporter asked Arizona Senator and interminable political gadfly John McCain a perfectly justifiable question – namely, whether his terrible relationship with President Donald Trump has descended to the point where McCain won’t support any items on the president’s agenda from his perch in the Senate.

That’s a question well worth asking McCain, considering that petty personal feuds have long been his stock in trade in the Senate. McCain, after all, refused to support drilling in the Alaska National Wildlife Reserve, a barren chunk of land bordering the Arctic Ocean where the environmental footprint needed to produce a significant increase in our energy reserves is infinitessimally small. And why? Merely because McCain and Alaska senator at the time Ted Stevens didn’t get along.

And then there was McCain’s vote against the “skinny repeal” of Obamacare earlier this year. How did that go?

The clerk read the Arizona senator’s surname in the microphone of the tense Senate chamber. The two words were met with silence — McCain had stepped out of the room minutes before.

But moments later, he reappeared. By then, the alphabetical roll call had reached Sen. Gary Peters of Michigan. McCain walked over to the front of the chamber, raising his right arm. He held it up in the air until he had the attention of the clerk.

“No,” he said, with a swift thumbs-down.

It was a “no” that could barely be heard on C-SPAN, and a thumbs-down that viewers would not have been able to easily make out. But the moment was crystal clear for the dozens of reporters watching from the gallery above, who let out a collective gasp and made a stampede exit for the wooden double doors behind them to report the news.

Not to mention there was this…

McCain similarly voted to kill the Graham-Cassidy bill, which was the last chance to repeal Obamacare through legislation this year.

And yesterday in a long-winded, sanctimonious speech McCain decried “half-baked, spurious nationalism” in a direct attack on Trump. This, from a man who gave bipartisan cover to an unprovoked and ultimately disastrous attack on Libya in 2011, when the United States government had normalized relations with that country’s then-ruler Muammar Qaddafi and received considerations for doing so.

The lack of introspection and complete cognitive dissonance associated with this pattern of behavior can only be explained by what Fox Reporter Peter Doocy isn’t alone in asking about – whether McCain’s animus toward Trump is so complete that he’s always going to be an opponent.

So Doocy asked the question, and this was the response he received.

Here’s what’s clear – John McCain’s brain cancer has degraded to the point where he no longer functions as a public servant in the U.S. Senate. He’s now nothing more than a settler of scores and a loose cannon on deck, and he will do as much damage to his president, his party and the institution he represents as he can before he’s gone.

Which puts many of us who would like to see Trump and the Senate succeed in passing good legislation where possible in a difficult position – namely, that while we don’t want to wish ill on anyone personally, if McCain’s current terminal brain cancer isn’t enough to dictate his resignation it might be that only a further downturn might produce it.

It’s terrible, and it makes us very uncomfortable. But McCain has been a terrible senator and he’s getting worse. Moreover he’s done more to damage the Republican Party’s effectiveness in that body than anyone else over the past century, and he is singularly responsible for preserving a law which imposes financially destabilizing costs on millions of American families with no discernible benefit – for reasons of personal pique.

And if this unacceptable result not only isn’t going to get better but won’t even be acknowledged on his part, then what are we to do but await whatever change is necessary to remove this man from the public space?

We deserve better. It’s time for McCain to go home to his family. Enough already.

Interested in more national news? We've got you covered! See More National News
Previous Article The Uranium One Case Just Got A Good Bit Worse Today…
Next Article We Agree With Samantha Power, And We Share Her Obvious Concerns