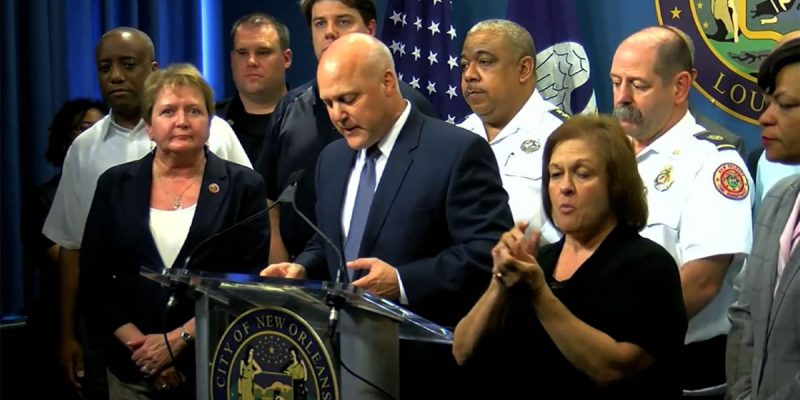 Despite the politician- and media-driven hype, Hurricane Nate had little to no meteorological impact on Southeast Louisiana. Unfortunately for the people and businesses of New Orleans, Mayor Mitch Landrieu made another bad call on his already pathetic resume.

Landrieu ordered or encouraged (or something) a curfew on New Orleans. Parties, events, weddings, charity fundraisers, second lines, restaurants, caterers, bars, grocery stores, and every other business around shut down in reaction to this. Originally Mitch issued the curfew starting at 6 pm Saturday. Then it changed to 7 pm. This curfew was widely criticized.

Nate never showed up. One band of wind and rain lasted maybe 15 minutes around 1 pm. After that, sporadic light drizzle and 3-8 mph winds. Nate was such a nothing storm that Mitch’s media people began calling New Orleans media outlets around 8:30 pm Saturday night telling them the curfew was lifted.

At 8:30 on a Saturday night, employers could not call in employees to open and work businesses. Upon hearing the Landrieu overreaction on Friday, some businesses shut down Friday night in preparation. Mitch’s actions were a direct, negative impact on the working people of New Orleans.

But some heroes knew better than to heed advice from a Landrieu. The long time New Orleans favorite RocknBowl openly defied Mitch. Its owner posted on Facebook:

If you need to order food…

RocknBowl will be open until further notice.

Through experience, I have learned to ignore this idiot mayor. His incompetence has been proven time and time again. If Mitch Landrieu says go left, go right. If he says stop, go…

Instead of Landrieu spending press conference time talking weather reports as if he is Bob Breck, and doing so to media outlets that are all heavily staffed with accredited meteorologists, perhaps he should weigh the consequences of his actions.

The media deserves much of the blame for the Nate overreaction as well. When New Orleanians criticized Landrieu‘s curfew Saturday night after Nate proved to be nothing, WVUE’s news anchors spent time defending Landrieu’s curfew order. This is so typical of 2017. It’s the reason why the country does not trust the news media. They take politicians’ sides or political angles as opposed to taking the people’s side. It’s why news outlets get called “Fake News.” Before the LSU game at 2:30 on Saturday, WWLTV opted to air its wall-to-wall coverage instead of the pregame show, showing pumps pumping at the 17th Street Canal in Lake Ponchartrain. At 2:30 at they finally switched over to the LSU Florida game. At 9 pm WVUE decided to run it’s 9 O’clock News broadcast instead of a college football game, well after anyone with eyes and ears knew that Nate would have zero impact on the metro area.

The local media and the elected leaders of New Orleans truly botched this one. The unspoken problem is that when you see Mitch and the 15 to 20 people standing behind him at a press conference and the field of news media, remember they all get paid well during disasters, most catch higher storm pay, for creating this theater of overreaction while the regular Janes and Joes lose income based on their work.

Question the lying politicians – and always consider the source of your information.

Interested in more news from Louisiana? We've got you covered! See More Louisiana News
Previous Article WAGUESPACK: The Way You Fight Poverty Is With Good Jobs
Next Article APPEL: Reflections On Time Spent In The Louisiana Legislature