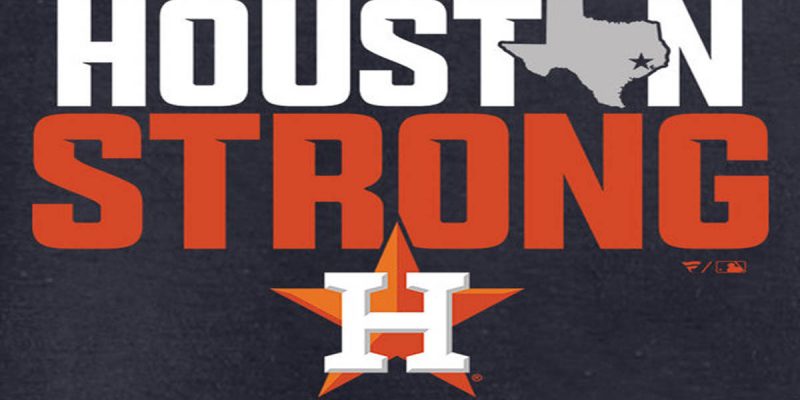 The Houston Astros enter the World Series after having clinched their second pennant, though their first as an American League team.

This has been a special season for the Astros, with their hot start and having enjoyed at times the best record in the Major Leagues, and Jeff Bagwell’s well-deserved induction into the Hall of Fame at Cooperstown.

It has also been a challenging time since the start of August. The bottom seemed to have fallen out of a franchise that had prevailed in over 2/3’s of their games and the city and southeast Texas was inundated by a rainfall that did not end.  As the water-logged city wrung itself out, the Astros endured the indignity of having to play home games in Tampa after their fellow Texans just three and one-half hours north on I-45 churlishly refused to trade homestands in the interest of THEIR fans, of which 19,000 of the Arlington stadium’s capacity of 49,000 opted to skip.

And then there was the fizzle of activity before the trade deadline, where the Astros dealt outfielder Nori Aoki and a prospect for a thirty-something midreliever with an ERA of 5.88.  Talk about curbing a fan base’s enthusiasm.

The folks in the stands were not the only ones displeased by the underwhelming moves by the front office; the boys in the clubhouse were livid and were not shy about registering their displeasure.

And then as the August nightmare faded, the Astros landed one of the best pitchers in the game from the Detroit Tigers.  Justin Verlander’s arrival changed everything.  The future Hall of Famer seemed rejuvenated by the change of scenery and place in the standings.  In five regular season starts, Verlander won five and finished his 2017 Astros regular season with a 1.06 ERA.

And things just got better in the post-season.  Verlander claimed two of the team’s three ALDS wins against the Red Sox, earning the second in relief.  In the ALCS Verlander shut down the rising New York Yankees with two wins, including stopping the streaking Yanks cold in what was an elimination game at Minute Maid Park, finishing the American League pennant series with an ERA of 0.56 and MVP honors.

Assuming Verlander works his similar magic in the World Series and helps secure a trophy for the franchise his belated acquisition will prove the be the most important trade in the history of the Astros.  Sorry Jeff.

Houston’s last trip to the series was in 2005 against the Chicago White Sox.  After enduring a tough fight with the St. Louis Cardinals that should have ended in five games instead of six but for a three-run blast in the 9th inning from Albert Pujols, the Astros stumbled into US Cellular Field in Chicago with their best pitcher Roy Oswalt having to rest after sealing the deal in the 6th game of the NLCS.  The Astros never truly recovered from Game 5.

Houston’s bullpen proved to be their Achilles’ Heel in the series with three of their four losses coming at the hands of their relievers and two of those owned by “ace” Brad Lidge.

While the sweep by the White Sox was ignominious, just being there represented the high-water mark for the Astros.

The 2017 edition is a much better team in many ways (not so much in the bullpen unfortunately).

Second baseman Jose Altuve finished the 2017 regular season with a batting average of .346 and will likely finish his career ranked alongside Nolan Ryan as the franchise’s greatest player.  Altuve and shortstop Carlos Correa have comprised a disproportionate share of the team’s offense in the playoffs.

Houston led the Major Leagues in team batting average with .282, .020 more than the next team- the Yankees.  They also led the majors in doubles, total bases, and runs batted in, though the Astro bats had gone cool in the ALCS.  They’ll have to warm up for the Los Angeles Dodgers as Altuve, Correa, and first base man Yuli Gurriel cannot carry the offense alone.

This lifelong Astros fan will admit that the Dodgers are a stronger team but when the Astros are hot, nobody can swing the bats better than Houston.

Verlander and Dallas Kecuhel will do their part to even things out with the Dodgers pitching but this series is going to be won by the bats- particularly since the Astros bullpen remains suspect and will need some cushion for the dreaded 8th inning comebacks by opponents that always seem to manifest even when the Astros enjoy a seemingly comfortable lead of 4 runs.

Avoiding a sweep by their former NL West rivals would historically represent progress for the Astros.  But after what Houston went through in August, they need to skip the small step and go for the big leap by taking home their first ever World Series trophy.

Interested in more news from Texas? We've got you covered! See More Texas News
Previous Article VIDEO: If You Want To Know Exactly How Fat And Lazy America Is, This Is Where We Are
Next Article BREAKING: The Skunk And Alan Seabaugh