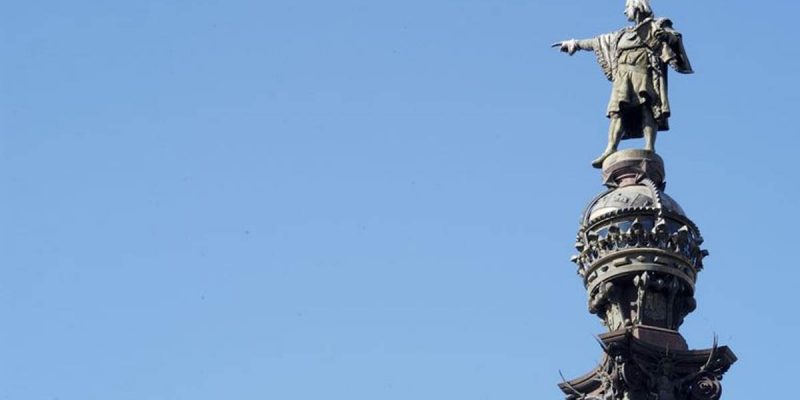 Well before the recent craze to remove anything Confederate from public view, there was the American Left’s crusade to demonize Christopher Columbus and eradicate all memorials dedicated to the world’s most important explorer and the discoverer of what, for his time, was a whole new world.

However aside from the aforementioned precincts, the longstanding war against Columbus never really gained traction.

However as America has reached “peak navel gazing” in terms of our national heritage and as memorial markers and statues related to the Confederacy (and some with only a tangential connection) have been hauled away to the scrap yard of history, the siege against the Genoan explorer has been renewed with vigor.

Defacing if not destroying landmarks is the favorite pastime of the cultural Marxists and the first time I had ever seen a historic monument vandalized was on my first trip to our nation’s capital while I was in high school.  It literally proved to be my introduction to Washington DC as we began our tour at Union Station, which is fronted by a magnificent white marble statue of Columbus.

As our bus was passing the statue the tour guide was explaining how the brownish stains that were being scrubbed off the monument were courtesy of an AIDS activist who hurled a few liters of blood at it.

The moment marked my school education coming full-circle.  As a second grader in a less perniciously political correct era in education, Columbus was the first historic figure I read about   And now as a senior I was witnessing the defacing of someone whom I considered a hero since grammar school.

By our current society’s moral standards, what followed Columbus’s appearance in the New World is considered repugnant, from colonization to enslavement of native peoples.

But where else in the world were things operating any differently from the Spanish Empire at that time?

Does the Left believe the rest of the world would have come to a gentlemen’s agreement allowing the western hemisphere to remain some kind of continental game and anthropological preserve, untainted by conquerors or technology?  Good luck with that.

Any nation that could manage to cross the wide expanse of an ocean would have also been capable of overwhelming the local inhabitants, who were better at astronomy and mathematics than waging warfare on a level and scope the indigenous people could comprehend.

And of course the practices of the natives were not exactly humane, from the cannibalism of the Caribs to the Aztecs’ mass human sacrifice ritual through ripping out beating hearts and slashing intestines.  The “virginal” New World had about as much in common with Jonestown as it did Eden.

Finally there are the splitting hairs over his title of being “discoverer” of the New World, as there were already people there and that the Vikings had established settlements in North America hundreds of years before Columbus’ birth.

In order to truly discover something, you need to promulgate said discovery.  Otherwise it’s the tree that fell in the woods where nobody was there to hear its sound.  The Viking settlements left behind in North America consist of crude ruins and their survey of Canada and Greenland did not lead to the foundation of the United States of Greater Norway.

In contrast, Columbus’s landing, record keeping, and most importantly return home with previously uncirculated information to a mass audience changed the world immediately, resulting in a tattered country staggering out from under centuries of Muslim domination into becoming the leading power in the world, spreading its culture, tongue, and religion across the globe.

Columbus is deserving of honor in not just the former Spanish realm that he and explorers that followed him would expand further, but in the decidedly non-Latin northern America as well.

It was Columbus who opened up the Western Hemisphere for settlement by the Old World ancestors of America’s Founding Fathers.  If George Washington is rightly considered the Father of Our Nation then Columbus is America’s Grandfather and is worthy of the numerous tributes that have been bestowed upon him across the United States, including a state capital, impressive monuments, and the benevolent Catholic fraternity that serves communities around the globe.

When Time Magazine began exploring who its Man of the Millennium should be, I thought the answer was obvious, though not to their editorial board.

They went with Albert Einstein, a safe choice as the non-controversial scientist ranks amongst civilization’s greatest minds. But no other single person could claim paternity for an entire new world.