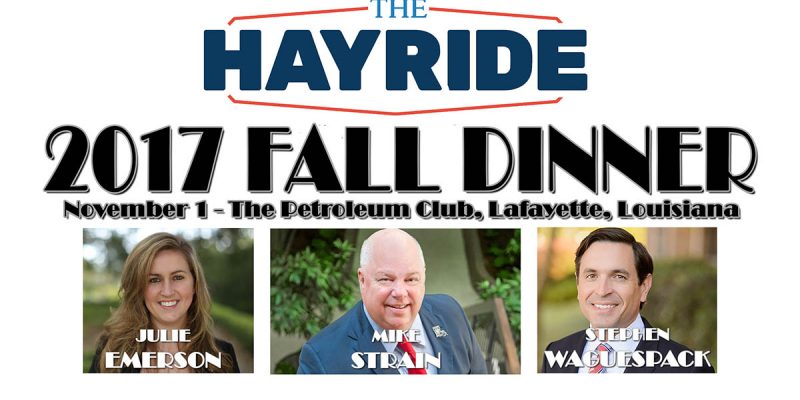 We’re going to keep bugging our readers with announcements like these, because that’s what you do when, after eight years, you realize that instead of having a publication which does events what you really have is an event marketing company which publishes a website. When we started doing Hayride dinners last year, and especially when we started doing multiple dinners around the state this year, that’s what we figured out – our Baton Rouge event in April was a sizable success (it paid for this brand-spanking-new website you’re looking at), and the one in Metairie in August did even better.

Go ahead. Click the link. Buy your tickets now.

So now Lafayette is upcoming on Nov. 1. It’ll be held at the Petroleum Club from 6-9 p.m., and we’re really excited about the speakers – Louisiana Commissioner of Agriculture Mike Strain, LABI president Stephen Waguespack and state representative Julie Emerson.

Come on. You know you want to do it. Tickets are only $80. That’s a bargain. Just click the link and buy them.

Several of you have come to us and suggested we should do some sort of “VIP-level” subscription to the Hayride as a means of generating revenue. That isn’t really our thing. What we’ve settled on is putting on Hayride dinners across Louisiana and, as the readership expands elsewhere as our coverage of events in Texas and other states increases, perhaps in other places across the South. Next year we’re planning six different events around the state – tentatively, Shreveport in January, Mandeville or Covington in March, Baton Rouge in April, Metairie in July or August, Lafayette in October and Alexandria in November. If you think that sounds like a tour, you’re right. And if you’ve got a suggestion for what to call it, let us know – we’ve been kicking around ideas for that but have yet to stumble over one we like.

Meantime, click the link. Buy a couple of tickets, will ya?

We’ve had good crowds for events so far and we expect another good one in Lafayette on Nov. 1. If you haven’t heard Strain, Waguespack or Emerson speak you’re in for a treat. They’re great. And given that the dinner will fall squarely during the runoff campaign in a statewide special election, this will be the first of our events taking place while the political fire is hot.

Or at least somewhat hot.

So join us in Lafayette for a great time. We can’t wait to see you!