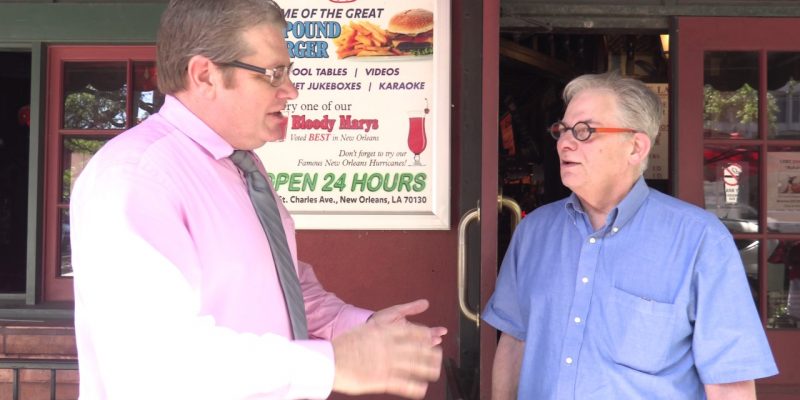 Tomorrow New Orleanians will vote in the first round (because there will presumably be a runoff) of the New Orleans mayoral race.  No matter who is elected, one hopes that our long municipal nightmare will be over, as the Landrieu Administration has been a poorly-managed, wanna-be technocracy characterized by economic stagnation, rising taxes, and over-regulation.

However, the main lot of candidates leaves much to be desired.  Virtually every poll shows three front-runners — Desiree Charbonnet, LaToya Cantrell, and Michael Bagneris.  All three have are establishment faces, and all three bear crippling flaws:

Desireee Charbonnet: Charbonnet is a former Chief Municipal Judge and Recorder of Mortgages for Orleans Parish, positions that shed little light on her policy predilections or executive abilities. Her candidacy for mayor has been punctuated by intense mudslinging; her opponents essentially call her corrupt and intimate that she’ll be selling the city to the highest bidder.  Charbonnet’s coterie consists largely of establishment figures who have been pulling strings for decades, which tends to justify these suspicions.

Nevertheless, Charbonnet is attempting to portray herself as a reformer, and the centerpiece of her agenda is her crime prevention plan.  Her plan entails the old policy sawhorses of hiring more officers and having a national search for a new police chief, but also in reducing funding to monitoring the federal consent decree.  Unfortunately, the NOPD needs more oversight and supervision, not less.  Overall, her crime plan is less a breath of fresh air than it is a revolting burst of halitosis.

Finally, Charbonnet’s public spat with rent-seeking garbage magnate Sydney Torres has just been embarrassing for all parties involved.  Ultimately, it’s difficult to justify pulling the lever for her.

LaToya Cantrell:  Cantrell is the current councilwoman for District “B,” which is to say that she is my current city council representative.  A native of California, she came to New Orleans for college and has remained since.  She made her bones in politics as head of the Broadmoor Improvement Association following Hurricane Katrina prior to be elected.  Now, she wants to be mayor.

The problem with Cantrell is that she’s a major pusher of progressive, flavor-of-the-month legislation.  If San Francisco did something ten years ago, she wants New Orleans doing it now.  Cantrell pioneered New Orleans’ smoking ban, and has attempted to follow up that victory by passing a ban (or at least a tax) on plastic shopping bags, and a “rental registry” creating a new inspection bureaucracy for all residential rental housing in the city.  She has also been a major force pushing affordable housing mandates for new development, and even proposed that New Orleans provide useless municipal ID cards for illegal immigrants.

Cantrell has a reputation as a hard worker who provides solid constituent services, but her policy agenda is the worst species of faddish dreck.  She seems to have little concern whether the legislation she proposes serve any real purpose other than to make peoples’ lives more difficult.  To put it mildly, I’m not a fan.

Michael Bagneris: Bagneris may not be the best choice for mayor, but his background is certainly impressive.  A graduate of Yale and Tulane Law School, Bagneris was on the bench in Civil District Court for 20 years before making his first attempt at a run for mayor.  However, Bagneris is playing his cards very close to the chest when it comes to his agenda, and given his exclusive background as a judge (which doesn’t deal with issues of public policy), some specifics would be nice.

What we do know about Bagneris’ policy positions tends to indicate skill at pandering and playing both sides.  He notoriously gained the support of Frank Stewart, in part by criticizing Mayor Landrieu for the way he handled the monuments controversy.  On the other hand, he notably refuses to say how he would actually have voted on the issue and now tries to avoid it entirely.  On the whole, Bagneris seems to be a running for mayor simply because he views it as another notch on his belt, not because he has a comprehensive vision for New Orleans.  He’ll say what it takes to get support.

I don’t like voting for a candidate who is basically a cipher.  Bagneris could be good, and he could be bad, but his candidacy doesn’t inspire confidence that he has the dedication to do the job correctly.

So who does inspire me?  Well, when faced with a smattering of dull, establishment voices pushing varying agendas you can’t support, voting for a minor candidate starts to sound like a better idea.  That’s why I’m going for Ed Bruski.  Bruski, a registered nurse running as an independent, hits all the right notes.  His purpose for running is based, in part, on the fact that we’ve gone off-track with the Landrieu Administration, and need to get back to rational policy making for the benefit of all New Orleanians.

Bruski sees no need for increasing taxes; rather, he says “we are misusing funds.”  He opposes the nickel-and-diming of New Orleanians via red light and speed cameras. Besides frugal government, the issues Bruski emphasizes are meat and potatoes — better streets, better drainage and pumps, better policing, and an education system that prepares our youth for real jobs.

Any vote for an independent will always be a type of protest vote, but I don’t think that voting for a nice, earnest guy who values good ideas over sexy ones is ever a mistake.  On the left side of the aisle, Peter Athas has reached the same conclusion (although he rejects the main field for somewhat different reasons).  At the very least, I won’t be holding my nose when I go to the polls.