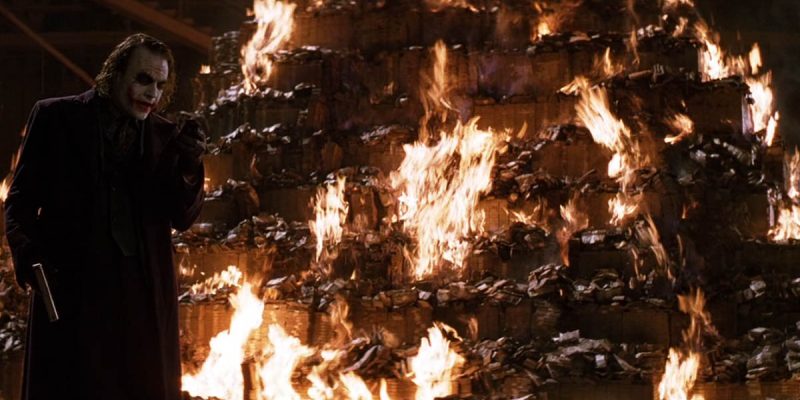 Here is a golden example of the off-the-rails waste we tolerate in Louisiana. It’s a story about the Baton Rouge Redevelopment Authority, which by the way is getting LSU law professor, avowed social justice warrior and failed Secretary of State candidate Chris Tyson as its new head, awarding a $450,000 contract to an architectural firm to design train stations for the passenger choo-choo train between Baton Rouge and New Orleans which will never be built.

Just setting taxpayer money on fire. It’s like that scene from The Dark Knight where The Joker lights up a 20-foot high stack of cash. Only this isn’t a movie.

The RDA board of commissioners will vote on the committee’s recommendation at its meeting Thursday.

HNTB was one of four firms that responded to the RDA’s Request for Proposals to design a rail station master plan for a proposed passenger train that would connect Baton Rouge to New Orleans. The controversial rail project, which has been in the works for years, is seen by some as a pipe dream but by others as a progressive solution to the area’s transportation infrastructure woes and a catalyst for economic development.

Though the proposed rail still has significant hurdles to overcome, Baton Rouge is moving forward with planning for it, largely as a result of efforts of the Baton Rouge Area Foundation, which has been pushing for the project.

HNTB, assuming it is approved for the contract by the RDA board next week, will be asked to identify sites for two rail stations—one downtown, one in the area of the Baton Rouge Health District—as well as to design those stations, identify potential funding sources for capital costs and address other logistical and technical issues.

Again – the choo-choo train between New Orleans and Baton Rouge is never going to happen because the federal dollars to build it are not coming. There is no rail line on which the passenger train can run; that will have to be built, because the freight lines currently in operation are being used by freight trains whose timetables will be destroyed if they’re forced to operate a passenger shuttle back and forth on them. There is no reasonable prognosis for the line to break even, meaning state or federal dollars that would otherwise go toward funding badly-needed road improvement or maintenance would have to be diverted to subsidize it.

And yet the government of Baton Rouge, which is now buried under a mountain of debt which jeopardizes even basic services going forward, is participating in this waste.

This is a bad idea in every particular, and for some reason it continues to siphon tax dollars away. You’re entitled to consider the choo-choo crowd at this point to be rapacious and malicious eradicators of your money – particularly when they continue to demand even more of it.

Interested in more news from Louisiana? We've got you covered! See More Louisiana News
Previous Article BAYHAM: Can The Saints Be Saved From Politics?
Next Article COURRÈGES: Major Candidates for New Orleans Mayor Are Unimpressive; It’s Time for a Bruski