If you haven’t, yesterday provided a bit of an education for you. It turns out that the East Baton Rouge city-parish government, which has one of the fattest municipal payrolls in America, is also one of the five most hopelessly overleveraged local governments in the country.

It’s better for LSU football to be in the top five than this.

Baton Rouge has one of the heaviest debt loads relative to its revenues of any municipality in the U.S., according to a recent report from JP Morgan Chase. According to the study, some 52% of city-parish dollars are obligated to pay for unfunded pension liabilities, retiree healthcare costs, and general bonded debt for programs like the city-parish’s sewer system upgrade.

“U.S. cities and counties have substantially more debt relative to their revenues than U.S. states,” the report says. “While most have several years to undertake remediation measures, some very difficult choices will be required in order for them to meet all of their future obligations.”

The choices outlined in the report for Baton Rouge are stark. Over the next 30 years, the city-parish, in a worst-case scenario, will have to either increases taxes by 24%, cut non-pension spending by 20% or increase worker contributions to the system by 525% in order to meet its obligations.

Without any remediation, Baton Rouge would have to average at least an 8% return on its investments over the next decade, the report says.

Baton Rouge is not alone in facing a mountain of underfunded debt. Topping the list of overleveraged cities is Chicago, where 62% of general fund dollars go to pare down debt. Houston, Atlanta and Pittsburgh, like Baton Rouge, have debt ratios of 52%.

City-parish Finance Director Marsha Hanlon says she is still trying to verify the data in the report, but the findings come as no surprise. Though Hanlon says she does not know exactly what numbers JP Morgan Chase used to arrive at its figures nor even which year the data was from, the city’s debt problem has long been recognized.

“This is nothing new,” she says. “I’ve been preaching this for years. We need to make changes to the way we do things.”

We found this out at the state level when Bobby Jindal was governor. He greatly shrunk the state’s payroll during his time in office, and in doing so Louisiana’s budget dropped from the $30 billion range down to the $25 billion range – but the unhappy realization toward the end was that such a large payroll for so long meant its tail – the pension obligations to those employees as they retired – became very long and very fat. Louisiana was paying a billion dollars more in pension obligations when Jindal left office than it was paying when he went in, and cutting the payroll with early retirements only made things worse.

In other words, fat government payrolls are a drain on the budget which never seems to go away. And Baton Rouge is about to learn a very painful lesson along those lines.

The report gives Baton Rouge—the only Louisiana city on the list—a debt risk indicator of 90, which is based on its debt ratio and other factors that mitigate or compound fiscal challenges, such as revenues and population growth. Only four cities have higher debt risk indicators than Baton Rouge—Chicago, Houston, Austin and Dallas.

JP Morgan Chase says it tracks cities’ debt loads because it manages $70 billion in U.S. municipal bonds and is therefore keenly interested in the credit risk of municipalities.

Things are not going to get better from here. Our pal Chris Rials cooked up this handy chart from numbers found at the city-parish web site… 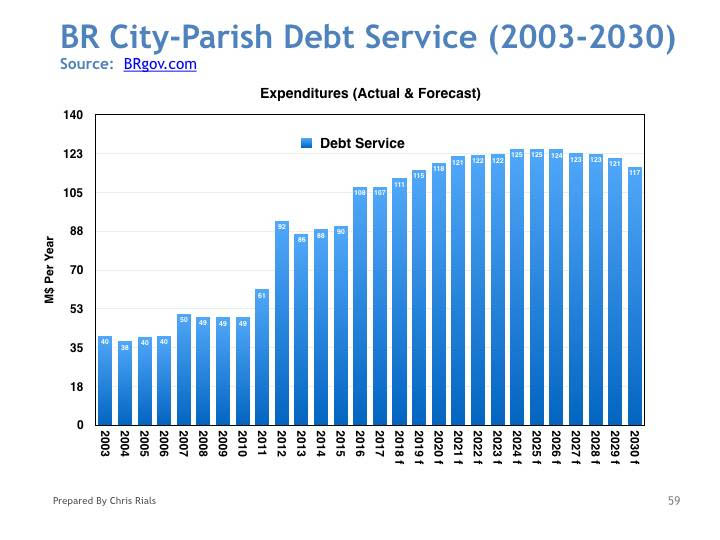 The upshot of this being that there is no more room for extravagance on libraries, dog parks, buses no one rides or political machines disguised as a Council on Aging. The game’s over now, because Baton Rouge’s current population isn’t paying any more in taxes. Debt service is going to squeeze a lot of the fat out of the budget – in the best of cases. In a more likely case, the fat will remain and the quality of city services will suffer, and that’s going to drive the tax base right out of East Baton Rouge Parish.

Little wonder the St. George folks jumped on this story yesterday and gave it the “See? We told you so!” treatment.

Interested in more news from Louisiana? We've got you covered! See More Louisiana News
Previous Article Lindsay Lohan And Her People Are Now Screaming At John Kennedy…
Next Article Could We Really Only Have 15 Percent Turnout For A Statewide Election?