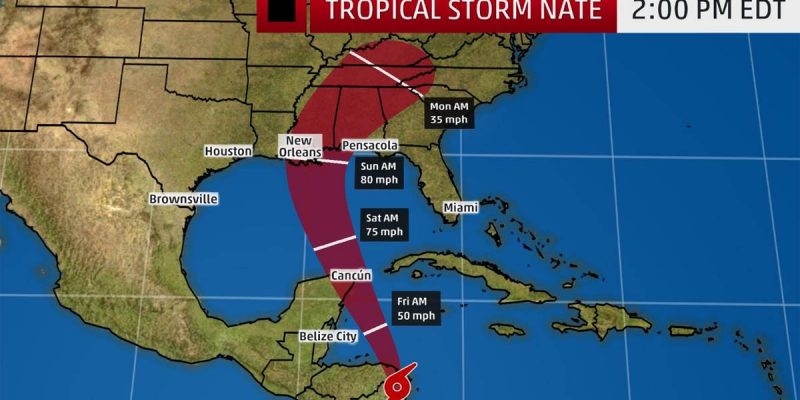 That would be Hurricane Nate, which at this point is not yet a hurricane and hopefully won’t actually be one. It’s still a tropical depression, hovering over Nicaragua.

But the forecast for this thing seems to be that it’s about to make a beeline north from Central America straight across the Gulf of Mexico to a destination somewhere between Houma and Panama City on the coast within the next three or four days.

Here’s what the Weather Channel says…

Nate will make landfall along the northern Gulf Coast, somewhere between Louisiana and Florida, Sunday. It remains too soon to tell where exactly this landfall will occur. The uncertainty in Nate’s forecast track is higher than normal.

Most guidance also suggests this landfall will most likely be as a low-end hurricane. However, intensity forecasts are notoriously tricky this far out in time and may change.

Nate’s core of convection will likely have to recover once its free of the Yucatan Peninsula and given its acceleration north, it may not have much time to strengthen in the Gulf of Mexico.

Here’s a general timeline of events with this system, regarding the U.S. Gulf Coast:

So that’s a little bit of a threat to football over the weekend, right? Well, there is some information on that, at least where the LSU-Florida game is concerned…

Florida sports information director Steve McClain said Wednesday his school is monitoring the storm’s progress but indicated there was no call for further planning at this time. The forecast for Gainesville on Saturday afternoon as of 6 p.m. Wednesday called for light winds with a chance of thunderstorms.

Herb Vincent, a former spokesman at LSU who is Southeastern Conference associate commissioner for communications, said: “Like all of our games, we’re monitoring them and tracking the weather. We’re looking forward to playing football on Saturday, but we see what everyone else sees. They’ll probably be dealing with some rain (in Gainesville), but you can’t tell about the wind.”

The forecast for Gainesville hasn’t changed since last night… 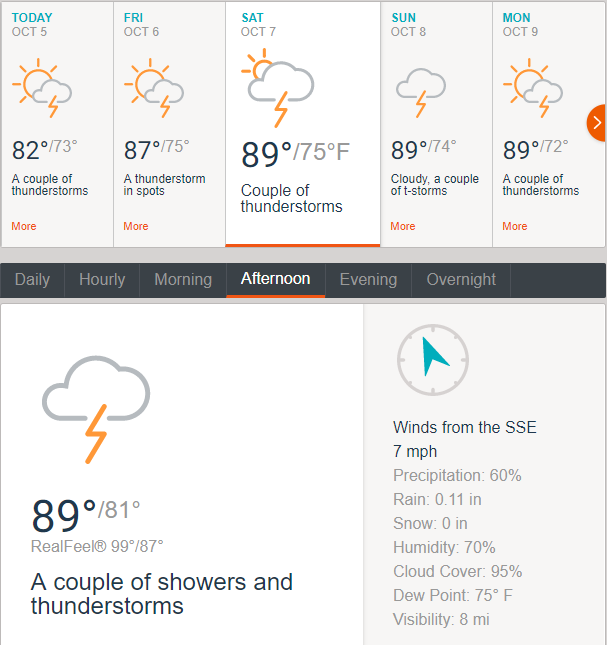 The Saints have a bye on Sunday, so that won’t be affected by the weather.

On the whole, this doesn’t look like much of a rival for Harvey or Irma or Maria, three fairly colossal storms which did major damage to Texas, Florida and Puerto Rico, respectively. But it might be just enough that the southeastern part of Louisiana can feel like we’ve participated in this year’s hurricane season.

As the folks in the southwestern part of the state can attest after getting sideswiped a bit by Harvey, the less participation in that the better.

Interested in more news from Louisiana? We've got you covered! See More Louisiana News
Previous Article A Federal Judge Just Sprung Dollar Bill Jefferson Out Of Jail
Next Article Some Of The Numbers Are In, And Early-Voting Turnout For The Oct. 14 Election Is Abysmal