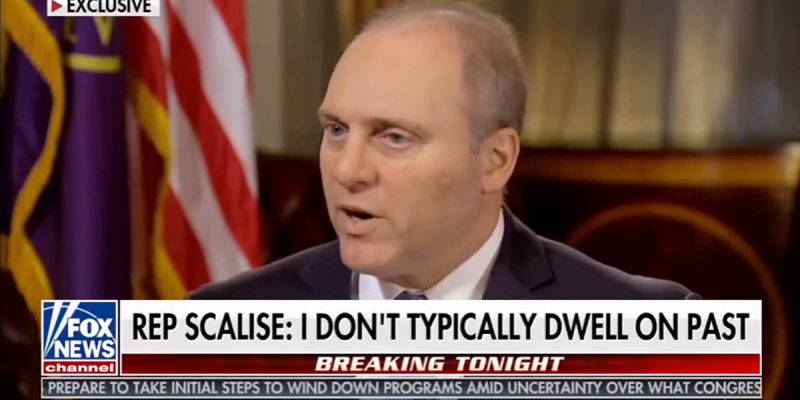 Here’s an interesting interview which aired on Fox News last night – it’s the first of two parts, with the other showing tonight. Rep. Steve Scalise, asked by Martha McCallum about being shot by James Hodgkinson over politics, made a strong plea for people to be civil about their political differences and not allow them to descend into violence.

That’s something which seems to work for Scalise, given that he’s a fairly well-liked figure on both sides of the political aisle – something that became very obvious when he returned to the House last week. He would be excused for bitter partisanship, if he had chosen it; after all, before there was James Hodgkinson and his rifle, Scalise had a couple of years earlier been smeared by Lamar White and his blog as a white supremacist because of a speech he gave to a group of people who may have included some David Duke fans in 2001.

But instead his message is people shouldn’t take these things so personally, and it’s a testament to his character that he’s able to put malice aside.

It’s also a testament to Scalise’s character that he’s able, despite his ordeal, to give an intelligent, non-emotionalist response to the terrible mass shooting in Las Vegas over the weekend. Asked by McCallum about the fresh, even ghoulish, demands for aggressive gun control now that what appears to be a mentally deranged millionaire with a grudge against the world (that appearance might change as more facts come out), Scalise doesn’t take the activist bait and instead notes that Congress passed a bill earlier this year to reform aspects of our mental health system in order to address some of the real causes of the mass shooting epidemic.

It’s a very good performance, and it’s vintage Scalise – he’s level-headed, he’s earnest and he’s able to keep a healthy perspective even when discussing some of the most contentious subjects. That’s why he might be the brightest star in Washington today.

Interested in more national news? We've got you covered! See More National News
Previous Article Schroder Puts Out His “The Party’s Over” Ad, Which May Or May Not Move The Treasurer’s Race
Next Article Alleva To Orgeron, Coordinators – “You Guys Are Gonna Get Me Fired”