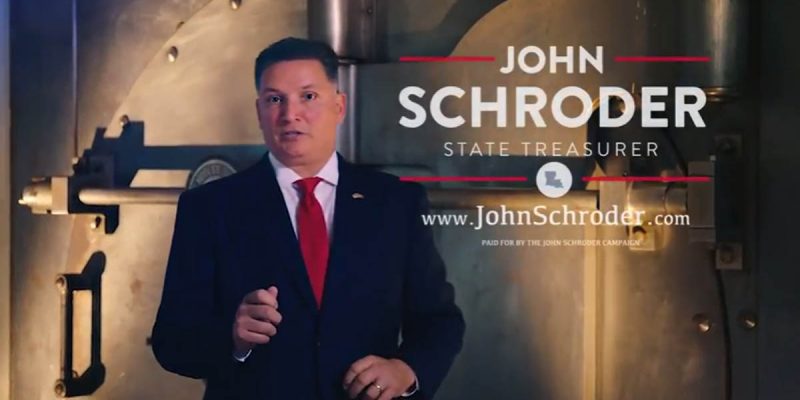 This is the most colorful ad of the Treasurer’s race so far, though we’re not sure it’ll cut through the voter disinterest. If nothing else, you’ve got to give former State Rep. John Schroder’s campaign credit for trying…

As campaign ads go it’s really pretty good. It taps into something everybody in Louisiana more or less knows, which is that state government wastes money in a way which is more than just irresponsible – it’s malignant, even actively hostile. The thugs in suits in the ad represent that pretty well. That it’s well-shot and has solid production values doesn’t hurt – not all of the ads in the race so far can make that claim. And it’s a lot more fun than anything else we’ve seen – the only thing we would have added would have been a shot of state troopers taking dirty selfies somewhere in the party.

Schroder’s consultant Lionel Rainey dreamed up the spot, we’re told, and if that’s true Rainey – who most of our readers probably first became aware of when he was the spokesman for the St. George incorporation effort back in 2015 – has managed to place himself firmly in the first tier of Louisiana’s political consultants. Obviously Schroder would need to first make the runoff and then win the race (the first part of that equation is the harder task; in a head-to-head with penniless Democrat Derrick Edwards any of the three Republicans will win easily) in order for Rainey to get such recognition, but he’ll at least have produced the most talked-about ad of the cycle before it’s done.

Well, we think that. Perhaps Neil Riser or Angele Davis have something up their sleeve which can trump this ad.

Will this help Schroder? One imagines it will. So far we’ve seen no evidence the voters care about the Treasurer’s race, and that usually means a lot of them can be motivated to vote for one candidate or another by small factors. A catchy TV ad can be more than enough to do that – we’ve seen it happen many times before. This ad could do that.

On the other hand, we’ve never seen this level of disengagement before, so maybe the ad won’t move the needle. And we’ve yet to see a credible poll telling us where Schroder is in relation to Riser or Davis anyway, so it’s possible he’s already ahead. Who knows?

What we can say about the ad is – and this isn’t a criticism, because nobody in the race is talking about what the Treasurer actually does, because if they did they’d never get the voters interested – it’s not really relevant. Schroder can’t stop the party in the state’s bank vault any more than John Kennedy could; he doesn’t have the power. He can act as Kennedy did to an extent, and shine the light on wasteful spending in hopes that the state legislature will then do something about it in the next round of budgetary fights. Kennedy was able to do a few things on the political side of that activity, though in doing so he showed how little power the Treasurer actually has.

We were hoping this race would be about the Treasurer’s job being given some more teeth in the state’s failed budget process. We were looking forward to one or more of the candidates to run on being made a part of the poor-performing Revenue Estimating Conference, which generates abysmally inaccurate budget projections every year; some fresh eyes couldn’t possibly hurt there. We were also looking for one or more of the candidates to talk about giving the Treasurer’s office some auditing power in the state budget in order to smoke out the waste this ad talks about; if any of them have made those noises we haven’t heard it.

Instead, it’s Angele Davis essentially stealing Kennedy’s endorsement while talking about Donald Trump, and it’s Riser winning over the Times-Picayune’s endorsement by making nice with the Democrats in New Orleans, and it’s Schroder locking all the party animals in a bank vault.

We don’t bear anybody a grudge about all this. The voters haven’t cared about the race yet and they’re dealing with that fact as best they can. At least Schroder’s trying to entertain us.

Interested in more national news? We've got you covered! See More National News
Previous Article APPEL: The Saints’ Kneeling Before The Anthem Is No Particular Improvement
Next Article VIDEO: Scalise On Fox News With Martha McCallum