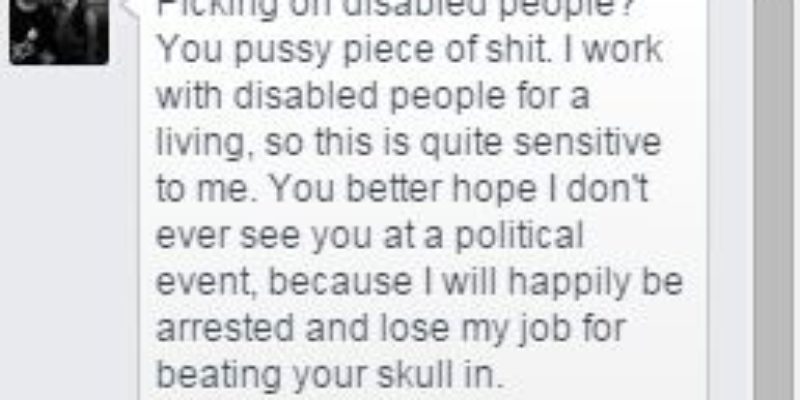 We ask, because earlier this month when he attempted to paint The Hayride as a hate site for the crime of ridiculing his clownish attempts at whoring himself out as a political tool for the noted leftist bigot Wendy Davis in Texas we said he was lame. And since White suffers from cerebral palsy and trades, in part, on using that condition as a shield against criticism from those who might judge him by the quality of his work rather than his status as a member of a special interest or victim group, he dispatched a horde of lefty keyboard commandos to conduct a program of Two Minutes Hate which lasted an entire weekend and included things like this… 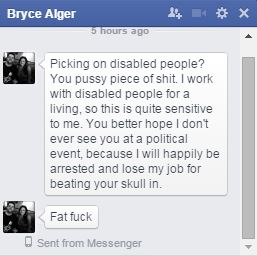 and this, from Lamar himself…

So obviously you can’t say Lamar White is lame when his desperate attempts to revive the Louisiana Democrat Party and construct some sense of relevance for himself devolve into the airing of smears against people his side can’t beat in elections or win against in the public discourse.

Remember when it became obvious the Left was going to assault Southerners as bigots once they no longer had any electoral skin in the game south of the Mason-Dixon line? Well, here’s the latest…

According to recently uncovered posts on Stormfront, the Internet’s oldest and most notorious white nationalist and neo-Nazi forum, the United States House Majority Whip, Steve Scalise (R- Louisiana), was allegedly an honored guest and speaker at an international conference of white supremacist leaders.

His district may have ignored it at the time, but the American public can’t.

Did Scalise speak at the David Duke thing? Yes, though apparently either unwittingly or as part of a strategy to spread the word about his legislative agenda to every crowd he could find regardless of the dental hygeine of the onlookers. Should he have? Probably not, though there is no evidence he gave a David Duke speech – he went there and spoke out against legislative slush funds which were largely done away with when Democrats had a majority in the legislature and tax increases on the middle class (which includes people who are not white, believe it or not – even in Louisiana).

Is this somehow important in the final days of 2014? Here’s Lamar’s conclusion…

And from the sound of it, Scalise accomplished what he came there to do: He convinced some vehement white racists and neo-Nazi bigots to vote for him.

Of course, the Washington Post picked up on White’s “scoop” and turned it into a splashy headline: “House majority whip Scalise acknowledges speaking at white nationalist event in 2002“…

Rep. Steve Scalise (R-La.), the House majority whip, acknowledged Monday that he spoke at a gathering hosted by white nationalist leaders while serving as a state representative in 2002, thrusting a racial controversy into House Republican ranks days before the party assumes control of both congressional chambers.

The 48-year-old Scalise, who ascended to the House GOP’s third-ranking post earlier this year, confirmed through an adviser that he once appeared at a convention of the European-American Unity and Rights Organization.

That organization, founded by former Ku Klux Klan leader David Duke, has been called a hate group by the Southern Poverty Law Center.

“Beyond hosting a website, whitecivilrights.com, and staging an occasional conference, EURO is a paper tiger, serving primarily as a vehicle to publicize Duke’s writing and sell his books,” the SPLC writes on its Web site.

Scalise’s staff did what they could to explain the controversy…

In a statement, Scalise’s spokesperson Moira Bagley emphasized that the then-state lawmaker was unaware at the time of the group’s ideology and its association with racists and neo-Nazi activists.

Other Scalise allies, who requested anonymity to speak candidly, argued that Scalise was poorly staffed during the period, when he was busy touring the state promoting his efforts to curb state spending.

“Throughout his career in public service, Mr. Scalise has spoken to hundreds of different groups with a broad range of viewpoints,” Bagley said. “In every case, he was building support for his policies, not the other way around. In 2002, he made himself available to anyone who wanted to hear his proposal to eliminate slush funds that wasted millions of taxpayer dollars as well as his opposition to a proposed tax increase on middle-class families.”

She added, “He has never been affiliated with the abhorrent group in question. The hate-fueled ignorance and intolerance that group projects is in stark contradiction to what Mr. Scalise believes and practices as a father, a husband, and a devoted Catholic.”

So you can add Steve Scalise to the list of people that Lamar White has smeared as racists and bigots because they disagree with him politically. And this is without a doubt a smear – if 12 years isn’t long enough for the statute of limitations to have run on the crime of giving a policy speech not alleged to be irresponsible or unacceptable to a disfavored group you otherwise have no affiliation with, then how long does that statute of limitations last? One would have thought it’s less than 12 years given the kid gloves Democrat hacks like White treated ex-Kleagle Robert Byrd with, or the feigned ignorance about Harry Reid’s recent and even current racist statements about blacks and Asians.

Nobody who has any political goodwill would scour the message boards – or whatever other pages are relevant – at Stormfront looking for tenuous connections to Louisiana Republicans to surface from more than a decade ago. To do so would constitute the basest of political motives, and a distinct deficit of character and confidence.

This is a nothingburger. It’s a waste of time, and White has trotted it out on the Monday after Christmas for the sole purpose of smearing Scalise during a slow news cycle and throwing a stinkbomb into the new Republican majority. He didn’t bring it out during the election, because his party had no viable candidate against Scalise in November, and if he’s in the process of building a case for Scalise as displaying a pattern of racism we’d like to see evidence beyond having given a standard speech decrying slush funds and tax increases at a venue at few minutes from his house to a group he otherwise might not have wanted to address for fear of having his audience used against him.

But since the Democrats have given up on trying to actually win honest arguments in this state (and elsewhere) and have nothing left but smears and name-calling, it’s what we have.

But if you call it lame, they’ll wish you dead.

Interested in more news from Louisiana? We've got you covered! See More Louisiana News
Previous Article WAGUESPACK: Accountability And Transparency Needed In 2015
Next Article A Smoking Ban In New Orleans May Be Exactly What Mitch Landrieu Wants