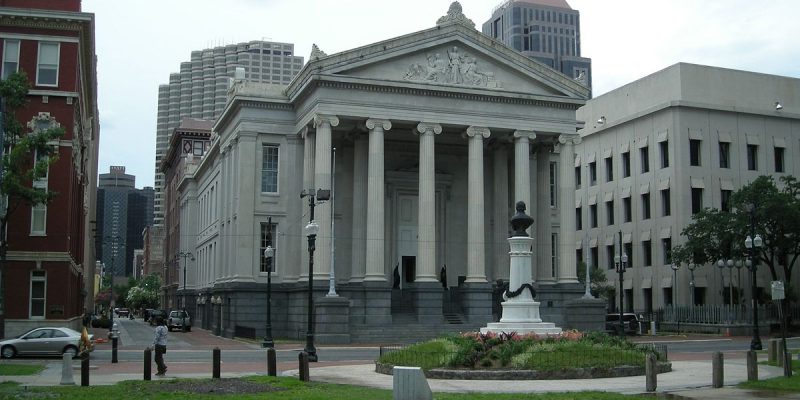 Stewart wrote a new letter to the editor, published by The Advocate, in which he highlights Mitch’s inconsistency:

How hypocritical it is to restore such a monument for the Tricentennial, which is considered an icon, and then tear down other monuments because you deem them to be a symbol of slavery, discrimination and segregation, and not honoring the individuals for whom the monument is named.

The monuments honor great leaders in history who felt slavery was evil and worked to end its practice. Robert E. Lee’s picture was prominently displayed in the Oval Office, and many of the past presidents felt he was one of our greatest citizens in history. What a hypocrite is our Mitch Landrieu!

The restoration Stewart references is a $15 million project to beautify Gallier Hall.  Mitch originally announced this project a week before he announced his plans to remove four Confederate monuments.

Mitch Landrieu concluded his desecration of New Orleans history with a celebration at Gallier Hall on May 19th.  The irony of his speech after the removals is that that Gallier was complicit in the slave trade in New Orleans.  James Gallier was an architect. One of his notable projects was the Merchants Exchange in New Orleans. Gallier’s building was used as a slave auction house even after the Civil War began. Mitch Landrieu held his victory lap in a building named for a man who heavily contributed to sustaining the slave trade in New Orleans. Not only that, Gallier owned slaves himself.

In June 2015 Mitch said: “Gallier Hall is a monument to all that we have achieved as a city and preserving it is an important task to not only pay homage to those that came before but for the generations that follow.”

Aside from the major Gallier Hall restoration, Landrieu has other efforts to memorialize the names of New Orleans slavers.  Mitch spent $9.1 million on the Lafitte Greenway, a bikepath named for the famous pirate who ran slaves.  This in itself hoists the most well known slaver in New Orleans history up on a pedestal for all the hipsters and Alt Left who bike around town.  Each time they use the Lafitte Greenway, they are honoring slavery.

Mitch will have spent approximately $25 million of city and state taxpayer funds on two projects named for slavers.  Mitch said, “the Confederacy was on the wrong side of humanity.” Yet hypocrite extraordinaire Mitch Landrieu cemented (and concreted!) the names of New Orleans slave owners, slave traders, and slave trade advocates into the history book for the Tricentennial.

By the standards he applied in justifying the destruction of those New Orleans landmarks, Mitch Landrieu’s actions revere slave owners. There is no other way to put it.

Interested in more national news? We've got you covered! See More National News
Previous Article The More We Find Out About The Calvin Toney Case, The More That Officer Deserves A Medal
Next Article It’s Looking Like Steve Scalise Has Done His Work On The House Tax Reform Bill