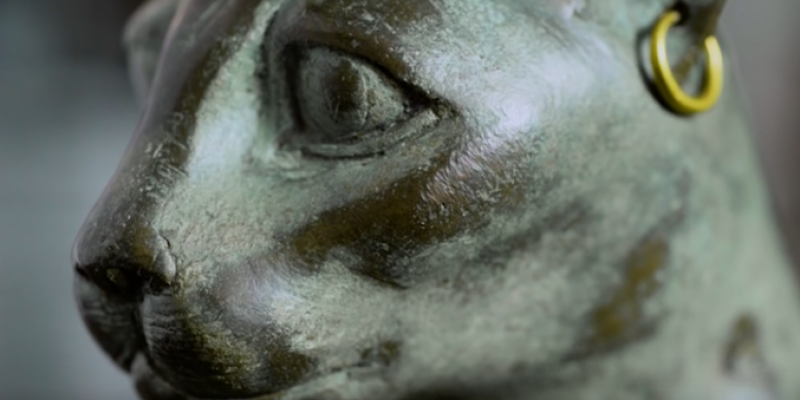 In case you missed it, October 29th was National Cat Day. And, while cute and fuzzy fur ball gifs dominated social media, what may be well less known is the deity status cats have held for thousands of years.

Famous felines like, “Grumpy Cat,” Sylvester, Hello Kitty, Tom (Tom and Jerry), and many others, have graced the screen, held a corner on the books and games market, and more recently, taken social media by storm. Two of the most popular shows on the Hallmark Channel  are the Kitten Bowl and Kitten Summer Games. And, the most popular videos online are of funny or cute cat and kitten compilations.

Cats have also been the focus of scientific studies, one of which recently argues that the common house cat, pound for pound, is just as ferocious as its wild cousin and unleashes more power in the milliseconds before it pounces– than a racehorse. Several archeological findings also indicate that cats accompanied vikings on their travels.

But beyond their nature of pet or predator, cats have represented deities in various cultures worldwide for thousands of years. Which is why, today, some cultural traditions still advise people not to double cross a cat– without jeopardizing their souls.

Here are a few cat goddesses not to be reckoned with:

In Celtic mythology, the Welsh goddess of wisdom, Ceridwen, was the mother of the famous bard Taliesin. Her attendants were white cats who carried out her orders worldwide.

The Chinese Book of Rites tells the story of the Chinese cat god, Li Shou, whom farmers worshipped to protect their crops from rats and mice.

In Egypt, the cat goddess Bast (or Bastet), was the deity of fertility, motherhood, and protection.  Even mummies were afraid of Bast, as she was the prowling overseer of the underworld. Cats were used to guard homes, and were bred and sacrificed to Bast. Their bodies were preserved and buried in miniature cat-shaped coffins so they could remain with their owners in the afterlife.

In Greek mythology, the goddess, Hecate, transformed into a cat to escape from the monster Typhon’s clutches. Afterwards, she bestowed special treatment to all felines.

In the Mochican, pre-Incan civilization of Peru, the god, Ai-Apaec, was said to have evolved from an ancient cat god and could transform into a cat. Unlike all of the other traditions of being a goddess, Ai-Apaec took on the male form. He was usually depicted as an old man, whose wrinkled face and long fangs were complimented by long, cat-like whiskers.

In Islam, cats are well respected for their cleanliness and are believed to seek out those who pray. Food that cats sample is considered halal, and water from which cats drink is allowed for the cleansing ritual, wudu. One tradition suggests that a cat owned by Muhammad’s friend, Abu Hurairah, saved him from being bitten by a snake. In response, Muhammad stroked the cat’s back and forehead, and bestowed on all cats the righting reflex ability. Some  believe that the striped marks on cats’ heads indicate Muhammad’s finger strokes.

Ovinnik was an ancient Polish god who first appeared as a black cat. Ovinnik was worshipped by farming families with the hope that their animals would be protected and evil ghosts and fairies would be thwarted.

According to Norse mythology, the Scandinavia goddess Freyja (who represents fertility, love, war, and wealth), rode in a chariot that was pulled by two giant gray cats, which were gifts from the god, Thor. Freyja was worshipped and received offerings for her cats, hoping that she would bestow on them a bountiful harvest.

This year, several museum exhibits highlight historic tributes to the feline species, including The Brooklyn Museum, the Smithsonian Institute, and the American Museum of the House Cat.