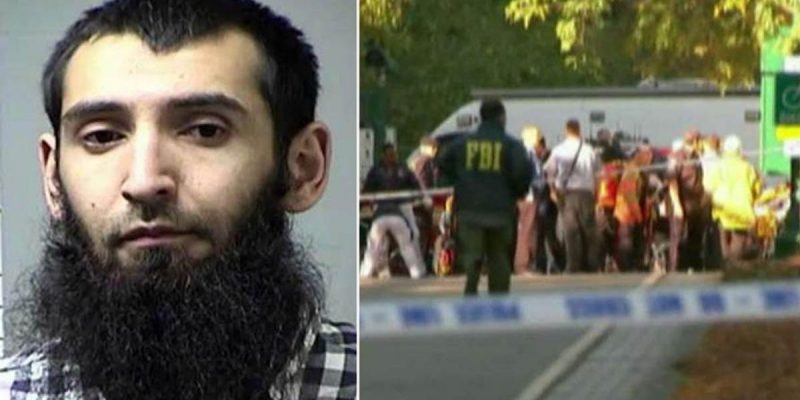 Halloween terrorist Sayfullo Saipov, a 29-year-old immigrant from Uzbekistan, plowed into a crowd of people in Lower Manhattan, killing eight men and wounding several others. Afterwards he got out of the truck he was driving holding two realistic-looking guns, and screamed, “Allahu Akbar!”

What is clear is that Saipov followed the instructions of the Qur’an to commit what Barack Obama has famously called, “workplace violence.” Obama was partially correct; Saipov was a contract killer working for Allah.

Islam is not a religion; it is a totalitarian political ideology that encompasses all of life and is antithetical to western democratic ideals. Its ideology aligns closest to fascism and Nazism.

Islamic law rejects every aspect of western law. Drinkers, gamblers, and unmarried sexual partners must be whipped; all gays, lesbians, bisexuals and transgender people are to be executed. Free speech, freedom of the press, freedom to worship or not worship, do not exist in Islam.

As Belgian leader Abu Imran explains, “democracy is the opposite of Islam. A Muslim who supports democracy is equivalent to a Jewish Muslim. It’s impossible to be both Jewish and Muslim and impossible to be a Muslim against Shari’a.” It is a Muslim’s duty to transform all governments to Shari’a Law.

Here’s one instruction of how to carry out workplace violence, from the “Verse of the Sword” in the Qur’an:

Fight those who do not believe in Allah, nor in the latter day, nor do they prohibit what Allah and His Messenger [Muhammad] have prohibited, nor follow the religion of truth [Islam], out of those who have been give the Book [the Bible, given to Christian and Jews], until they pay the tax in acknowledgment of [Muslim] superiority and they [Christians and Jews] are in a state of subjection [dhimmitude, i.e. third-class legal status for non-Muslims]. (Surah 9:29)

The majority of Muslims surveyed in a 2010 Pew Research poll support the death penalty in their country for those who leave Islam. The Qur’an orders death for anyone who criticizes Muhammad, Allah, and the Qur’an.

Following the Qur’an led to the beheading an Oklahoma woman because she rejected Islam. Both a Harvard Chaplain who supports death to non-Muslims and the Ground Zero Imam who openly claims those who leave Islam should be imprisoned, follow the Qur’an.

Following the Qur’an has resulted in Muslims killing more than 3,000 Americans on American soil in more than 75 terrorist attacks over the last 40 years. Not to mention the hundreds of millions of women, children and blacks enslaved in 57 Islamic countries.

If Saipov was graded on his act of terrorism, he’d maybe get an A- only because he did not die in the process and become a martyr. If he had he would have received the highest honor from Allah and definitely an A+.