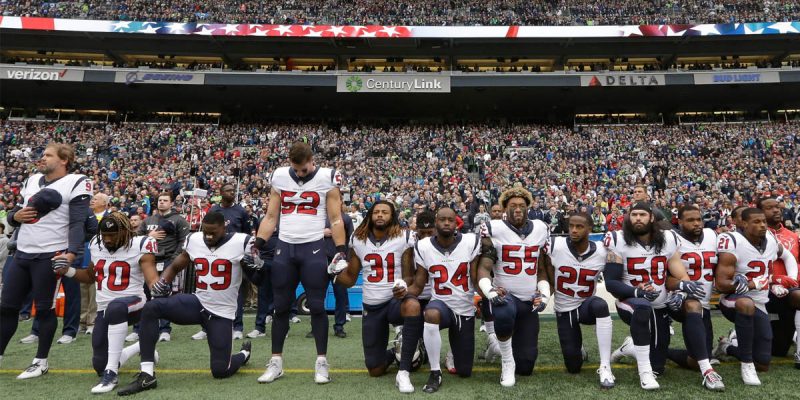 This needed to be done in the wake of the furious idiocy taking place in Houston last week, in which Houston Texans owner Bob McNair found himself in the Outrage Spin Cycle after it was reported that, during a private meeting of NFL owners, he expressed concern over what the league’s players were doing to its TV ratings and attendance with the kneeling during the national anthem.

What McNair said was that it’s a bad idea for “the inmates to run the prison.” That’s a change from the usual idiom that the inmates shouldn’t run the asylum, but it probably makes more sense today given that we don’t call mental hospitals asylums anymore.

Every intelligent person understands what McNair was saying. Here is a man whose billion-dollar business is being hurt – significantly – due to fan backlash against players disrespecting the flag and the national anthem on company time. And he’s suffering this damage despite having made no show of support for that disrespect. If anything, McNair and the other owners are the victims of the kneeling by those players – while the fans might well be pissed off at the kneeling and might well be forced to engage in home improvement projects on Sundays by their wives after foregoing watching NFL games, the owners are taking a financial bath because of the kneeling and in most cases they neither asked for it nor ever thought it was a good idea.

At best, some of them engaged in palliative actions designed to make a deal with their players so they would stop doing damage to the product. But make no mistake, while the owners have been exceptionally weak in putting a stop to the players’ divisive political activism on company time, they are not directing that activism and they are victims of it.

Frankly, it’s surprising the owners haven’t sued the kneeling players for the damage to the league’s business they’ve caused.

In any event, when McNair noted it’s a bad idea to continue allowing the players to run the fans off by using the inmates-running-the-prison idiom and the word got out, no less than 10 Texan players walked off their jobs last week. And the majority of the team knelt for the national anthem on Sunday.

We’ve written this before, but the idiocy of the kneeling, and the further idiocy of those defending the kneeling by asserting some imaginary First Amendment right to engage in political activism unrelated to one’s job while on company time, is not dissimilar to the cashier at Burger King haranguing customers about the brutal conditions awaiting cows at slaughterhouses. The effect on sales is pretty similar given who the NFL’s fans are and how hardcore most of them are with respect to the question of patriotism. One might imagine the store manager at the Burger King would be quite prompt in firing the PETA activists chasing the customers away.

But somehow, the NFL players have managed to find a lot more tolerance of destructive behavior on a lot larger scale.

And after a week of this McNair controversy, Clay Travis finally erupted in a shimmering masterpiece of a profanity-laced tirade against the idiots who play for the Houston Texans.

An idiom, for those of you who need a refresher course in elementary school English, is per the dictionary “a group of words established by usage as having a meaning not deducible from those of the individual word.”

If you had never heard the idiom McNair used you could have pulled out your phone and googled the phrase, rapidly understanding its common usage. That way your response wouldn’t be ignorant, illogical and prove the exact point the owner of your team was making — that protests are bad for business.

But instead of doing this Houston Texans players skipped practice and later decided to STAGE A PROTEST AGAINST THE USE OF AN IDIOM.

I swear to God, every time I think sports stories can’t get any dumber, they do.

And that’s despite the fact that these same players use sports idioms all the time.

Here are some popular sports idioms: the ball is in your court, that’s par for the course, he or she hit a home run, he or she is out of her league, we’re coming down the home stretch, down for the count, full court press, move the goal post, keep your eye on the ball, lightweight, saved by the bell, and even the name of this website, outkick the coverage.

Our regular day speech is peppered with idioms, words that don’t literally translate to how they’re used. Such as piece of cake, that costs an arm and a leg, hit the nail on the head, you can’t judge a book by its cover, there’s more than one way to skin a cat, when pigs fly, a penny for your thoughts, you can see the entire list here of popular idioms here.

The point of these is that NONE OF THESE ARE LITERAL STATEMENTS.

If I said, curiosity killed the cat, would any of you wonder why curiosity wasn’t being charged with animal cruelty? I mean any of you who don’t play football for the Houston Texans.

The Houston Texans owner should actually be thanking his lucky stars he didn’t say “we can’t let the monkeys run the zoo,” because if he’d said that he would have been led before a firing squad and publicly executed immediately before the national anthem in Seattle. IDIOMS ARE HATE CRIMES, Y’ALL!

It’s impossible for the country to get any dumber.

And Travis is right. The one thing this entire kneeling controversy has proved is that NFL players, or at least a large number of them, are by and large unintelligent people. That few of them are Rhodes Scholars or brilliant political theorists was never in doubt, but the truly amazing thing is how uncommonly stupid and shortsighted these people are in engaging in the kneeling. After last year it should have been obvious that the message they were trying to get across was falling flat, and it should have also been obvious that the personal consequences to the kneelers would be intensely negative – the fact the owners had no interest in signing Colin Kaepernick, who started this stupidity from the beginning, should have been a nice clue.

What’s going to happen this offseason will likely be the education these fools didn’t get in college. You’re going to see a whole lot of prominent kneelers get cut and go unsigned just like Kaepernick. The owners are fighting amongst themselves over whether to extend league commissioner Roger Goodell’s contract; it’s hard to imagine how Goodell could preside over a 20 percent drop in NFL ratings in the space of just over a year without losing his job. But regardless of whether Goodell survives, there will be a whole lot of Kaepernicks littering the waiver wire when this season is over.

As for McNair, he ought to tell his team that anybody who wants his release can have it immediately and unconditionally, but otherwise he expects them to shut up and play the game.