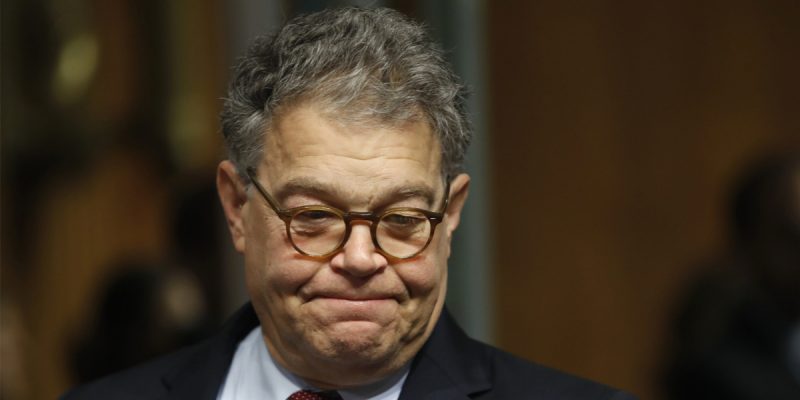 You shouldn’t be, of course, as the kind of behavior Franken exhibited with respect to Leeann Tweeden was never going to be a one-off thing. Couple that with Franken’s previous existence as a semi-successful comedian of the vulgar variety, and it was always going to be a pattern that he’d acted in an abusive way toward women.

There are three stories about Franken’s sexual harassment antics floating about. The first was from Media Equalizer’s Melanie Morgan, who said Franken stalked her after the two shared an appearance on Bill Maher’s Politically Incorrect show…

She was joined by Franken, William Baldwin, and then-Colorado Lt. Governor Joe Rogers on the panel.

Morgan and Franken had a dispute over the OMB’s budget numbers.

“I was invited and unaware of who his guests were going to be that night,” Morgan said.

“I made a statement about the budget numbers, Franken challenged me, I challenged him back. It was about spending priorities, actually just a mundane discussion. But he obsessed over it.”

After the show, Morgan said Franken wouldn’t leave her alone, insisting on continuing the argument.

“He approached me backstage, angrily called me out on those numbers and insisted he would prove he was right. He wouldn’t leave me alone, he kept following me. As a woman, his presence and proximity to me felt very threatening and intimindating.

“I didn’t realize his creepy behavior after the show meant it would continue in the days to come.

“He approached Carol, the show’s producer and demanded my home phone number, which was a clear violation of network protocol. I had thought that was the end of the story and was shocked when he started calling my home, badgering me repeatedly.

“I became fearful and called Carol to complain and asked her to tell him to back off. But he made another call after that. I thought that he might end up stalking me at my home in Northern California, it was that bad.

“By the third phone call I was outraged and terrified, as he is really disturbed,” Morgan recounted.

Morgan said Franken finally left her alone, but only after she pushed back and threatened “to call the police and make a report that he was harassing me.”

Lindsay Menz, a 33-year-old woman who now lives in Frisco, Texas, reached out to CNN on Thursday hours after Tweeden made her story public. Menz said she wanted to share an “uncomfortable” interaction that left her feeling “gross.”

According to Menz, she attended the Minnesota State Fair with her husband and father in the summer of 2010, almost two years after Franken was elected to the Senate. Her father’s small business was sponsoring a local radio booth, and she spent the day meeting various elected officials, political candidates and celebrities and taking photos with them as they stopped by the booth.

When Franken walked in, Menz and her husband, who also spoke with CNN, said they recognized him right away. Menz said she had a brief and cordial exchange with the senator.

Then, as her husband held up her phone and got ready to snap a photo of the two of them, Franken “pulled me in really close, like awkward close, and as my husband took the picture, he put his hand full-fledged on my rear,” Menz said. “It was wrapped tightly around my butt cheek.”

“He reached around her and kind of pulled her into him,” said her husband Jeremy Menz, who didn’t see what happened behind his wife. “He pulled her in and pushed his head against her head. It was over pretty quick.”

Lindsay Menz told CNN that she walked away as soon as the photo was taken, without saying anything to the then-first term senator. When she reconnected with her husband moments later, she told him: “He totally grabbed my butt.” Jeremy Menz described that conversation the same way to CNN.

In a statement to CNN Sunday, Franken said he did not remember taking the photo with Menz and that he felt “badly” that she felt disrespected.

“I take thousands of photos at the state fair surrounded by hundreds of people, and I certainly don’t remember taking this picture,” Franken said. “I feel badly that Ms. Menz came away from our interaction feeling disrespected.”

“I felt gross. It’d be like being walking through the mall and some random person grabbing your butt,” Lindsay Menz said. “You just feel gross. Like ew, I want to wash that off of me.”

And the American Spectator’s Jack Feder recounts a rather interesting performance Franken and his old comedy partner Tom Davis put on in Bozeman, Montana back in the 1980’s as a good example of who he is and who he’s been…

Franken (or was it Davis?) announced it was time to take a break from the rollicking hilarity and laughter. It was time to dance!

They each stepped off the front of the stage and into the chairs and picked out two comely young college girls and brought them up to the stage. The lights dimmed. Soft, romantic music began to play. Franken and Davis wrapped their arms around their partners and pressed their bodies close. The girls complied.

They danced. They swayed.

And then Al’s hands slid down to his dancing partner’s ass. And I use the word ‘ass’ because in that context, that’s the word you’d use. Not buttocks or fanny or tail or bottom. Ass.

His hands began fondling her ass.

Ha ha ha. There was laughter from the assembled voyeurs, excuse me, spectators.

The girls both reached behind and moved the roving hands up.

After which the hands slid back down to cop another slow, sensuous feel. Over and over and over.

Hey, at least Harvey made his moves in private, not on a public stage. And while his victims were awake, not asleep.

In my early twenties, I wasn’t prissy. Hardly. But I remember thinking this was a pretty weird skit. Or at least I scratched my head wondering what I was missing. I didn’t laugh. I kept waiting for a punchline, as though the ass grab was a setup. But it wasn’t a setup. Fondling the fanny was the whole point.

I also recall a sort of protective reaction. (Go ahead, accuse me of White Male Savior Complex.)

These were two young Montana girls, 18 to 20, and Franken and Davis were a seasoned pair of high power comedians at the height of Saturday Night Live fame. They were stars. They owned New York City, for crying out loud. These girls might have been cheerleaders at Three Forks High School. Maybe even prom princesses. Not cosmopolitan New Yorkers.

These two successful entertainers put two girls on stage, in front of maybe two hundred people, in roles of dancers, and began fondling them. Straight and simple as that. Maybe Franken and Davis whispered instructions into the girls’ ears, I don’t know.

In any event, the ass grabbing continued for the duration of the song.

We’ll just exit with the obvious – there will turn out to be a very long pattern of ungentlemanly, and worse, behavior on the part of Franken, and when it’s all said and done there will be no way to disqualify Roy Moore for the accusations made against him without sacrificing Franken from the Senate.

For our part Franken should have been expelled for stealing his seat from Norm Coleman in 2008. Expelling him now based on these rumors would only be fueling the hysteria over sexual harassment which more than likely won’t end well.

Interested in more national news? We've got you covered! See More National News
Previous Article John Kennedy’s Treatment Of Kyle Duncan’s 5th Circuit Nomination Is Concerning…
Next Article WAGUESPACK: Thanks To The Role Models Among Us