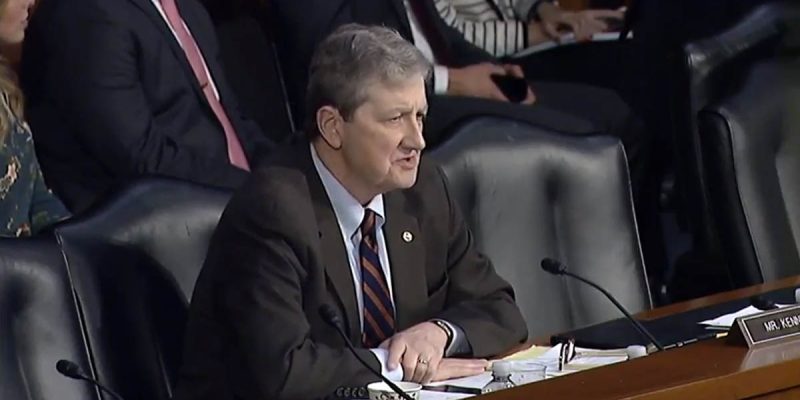 UPDATE: Kennedy’s camp tells us two things – first, that it’s not true he didn’t return a “blue slip” on Kyle Duncan; he did that last week despite some reporting by a few national media outlets covering Duncan’s nomination. The difference is that usually a return of a blue slip is accompanied by a statement of support and in this case that wasn’t forthcoming.

The second element of their response is to say rather forcefully that Kennedy has not expressed opposition to Duncan; he’s simply undecided. And Kennedy’s camp says it’s not an ideological issue; what concerns Kennedy is that Duncan’s record mostly consists, at least with respect to the high-profile work he’s done, of First Amendment/freedom of religion constitutional work; and while the senator likes the stances Duncan has taken there what he doesn’t know is what kind of judge Duncan would be on other issues more likely to occupy the Fifth Circuit’s docket, like oil and gas or maritime law.

The criticism which could follow those contentions is relatively obvious; namely, that if Kennedy wanted to quell the grumbling on the right about how this process has played out to date he could say that he supports the nomination subject to Duncan’s successfully answering those questions at his hearing on Wednesday. That might have been a more politically useful way to go.

ORIGINAL:…and it’s starting to become an issue which should make Louisiana’s conservatives question whether Louisiana’s junior Senator hasn’t spent the last decade running a long con. For some reason Kennedy is opposing Duncan’s nomination despite a concerted effort inside and outside Louisiana to get the Baton Rouge native and respected constitutional lawyer onto the 5th Circuit bench, and there is growing concern in Republican circles over the matter.

Last week, Kennedy’s failure to return a “blue slip” on Duncan made Senate Judiciary Chairman Chuck Grassley take the unusual step of removing the requirement that both of a state’s senators submit one in order to advance the nomination of a judge from that state to committee hearings.

Grassley announced on Thursday that he has scheduled Nov. 29 hearings for David Stras, Trump’s nomination to be an appellate judge on the 8th Circuit, and for Kyle Duncan, nominated to serve the 5th Circuit.

“Today, I’m announcing that the Judiciary Committee will hold a hearing for two circuit court nominees, each of whom has one home state senator who has not returned a blue slip containing a positive endorsement,” Grassley said from the Senate floor.

Stras’s nomination has been in limbo since early September when Sen. Al Franken (D-Minn.) said he wouldn’t turn in his blue slip because he has “grown concerned that if confirmed to the federal bench, Justice Stras would be a deeply conservative jurist.”

Grassley noted that GOP Sen. John Kennedy (La.) had not returned a positive blue slip for Duncan, but has said he does not oppose having a hearing.

The “blue-slip” rule — a precedent upheld by Senate tradition — has historically allowed a home-state senator to stop a lower-court nominee by refusing to return a sheet of paper, known as a blue slip, to the Judiciary Committee.

The New Orleans Times-Picayune says Grassley’s decision likely ends any real chance Duncan won’t be confirmed, though we don’t take anything for granted which depends on the weak and ineffectual GOP majority in that body…

Carl Tobias, a law professor at the University of Richmond and student of the federal judiciary, said Grassley’s decision is a “great sign” for Duncan. “It gives him a good chance to get confirmed,” Tobias said Friday. “Basically, the Republicans are rubber-stamping everyone” Trump nominates.

Whether Kennedy comes around, however, or even whether that matters, is an open question. “The GOP is basically shunting him aside,” Tobias said.

Kennedy’s office had no comment to the Times-Picayune on Friday, and the Kennedy staffers we’ve reached out to have been pretty mum on the subject as well.

But lots of other folks around the state haven’t been quiet, and they’re starting to notice this peculiar opposition. The Louisiana Family Forum, for example, noted Kennedy’s having said he’s “undecided” on Duncan to its e-mail list on Friday and asked its members to contact him to express support for Duncan. And Louisiana Attorney General Jeff Landry is doing TV and radio ads to support a campaign by the conservative Judicial Crisis Network to get Duncan confirmed.

Kennedy’s lack of a blue slip on Duncan wouldn’t seem like a big deal, but it is. His is the only failure to turn in a blue slip on a Trump judicial nominee by a Republican senator; all the others have been by Democrats for partisan or ideological purposes.

We’re told that Kennedy and Duncan had a meeting months ago about the nomination and it didn’t go well, but no one seems to know why. We’ve also been told two different stories about deals made with Kennedy on this nomination which he wouldn’t appear to be sticking by – one was that Cassidy agreed to support Kurt Engelhardt, the other Louisiana nominee for the 5th Circuit who’s moving through the process in the Senate, if Kennedy would agree to support Duncan. The other was that Kennedy would be able to recommend all the state’s US Attorney nominees and Cassidy would get the federal judges. Whether either of those stories is true, we can’t say, but in either case it appears as though Kennedy isn’t holding up his end of the deal if in fact he agreed to an arrangement.

Duncan is the type of appellate court judge Donald Trump was elected president to appoint. He’s of the strict constructionist school, and he’d be a mini-Antonin Scalia on the 5th Circuit. His work as the general counsel for the DC-based Becket Fund for Religious Liberty makes him more or less a gold-standard choice for the state’s social conservatives, and the limited-government crowd is a fan of his work defending Louisiana’s statutes on same-sex marriage and abortion against federal intervention from a federalist perspective. If he and Kennedy didn’t personally hit it off nobody really cares; a common reaction we hear is “Kennedy needs to grow up.”

Is this a tempest in a teapot? Perhaps so. But it’s already a sore spot that Kennedy’s initial recommendation for the U.S. Attorney in New Orleans, Kyle Schonekas, was a lawyer for both Planned Parenthood and Black Lives Matter and isn’t a registered Republican and was rejected by the Trump administration, and when New Orleans district attorney Leon Cannizzaro, a Democrat who tried to prosecute a homeowner named Merritt Landry who shot a burglar as he climbed over a wall onto Landry’s property and had to drop the case when the burglar, having recovered from a head wound, attempted to burgle someone else, was suggested as another of Kennedy’s choices the Senate said he would be a good U.S. Attorney but was otherwise noncommittal. The Eastern District of Louisiana still doesn’t have a nominee for U.S. Attorney, which is a raging inferno of a problem given that outgoing FBI Special Agent In Charge Jeffrey Sallet castigated New Orleans-area political corruption by saying it “can’t get much worse.”

None of it looks good.

Kennedy has been loud about repealing Obamacare and he’s made highly supportive noises about the tax reform plan being debated on Capitol Hill, so publicly he looks every bit the conservative Republican Louisiana voted for last year. But the activists in the state are starting to wonder whether the US Attorney business and the new controversy over Duncan’s nomination indicates Louisiana has been sold a pig in a poke – after all, 10 years ago Kennedy was a Democrat, and there are lots of people who look upon him as more of an opportunist than an ideologue.

If Kennedy is serious about running for governor in 2019, he’s not off to a great start in building a coalition that includes the state’s conservatives – who might look elsewhere for their candidate at this rate.

Interested in more news from Louisiana? We've got you covered! See More Louisiana News
Previous Article BAYHAM: Reviewing The 2017 Louisiana Runoffs And The Political Winners And Losers
Next Article Here Comes The Parade Of Al Franken Accusers. Are You Surprised?