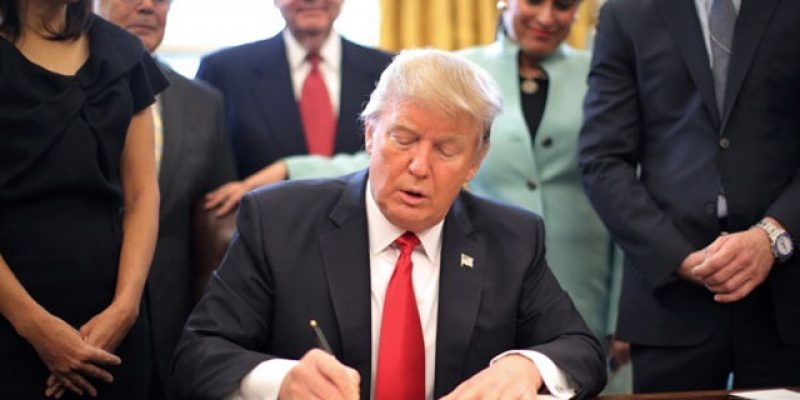 One year ago, the political earth stood still with the election of Donald Trump as President of the United States. A majority of American voters in 30 states awarded their electoral votes and the presidency to an outsider, a businessman and reality TV star with decades in the public eye, but no experience as an elected official. He won by running against the establishment in both political parties, the media, bad trade deals, and policies of countries such as Mexico and China that he believed were not in the best interest of the American people.

Unlike previous GOP presidential candidates, Donald Trump connected with voters in Rust Belt states who were ignored in the past. He talked about jobs, trade deals, coal, infrastructure, a border wall, tax cuts, repealing Obamacare and putting “America First.” After supporting phony Democratic presidential nominees for years, these blue-collar voters gave Donald Trump the margin he needed for victory.

To win, Donald Trump had to defeat 16 career politicians and establishment Republicans in the primaries and a “Never Trump” candidate that disgruntled conservatives fielded in the general election. Of course, he also had to overcome his major opponent, Hillary Clinton, who received extremely positive media coverage and enjoyed a huge political war chest that was twice the size of Trump’s account.

The media thoroughly covered up Hillary’s health problems, including her pneumonia and fainting episode on the anniversary of September 11. In contrast, Donald Trump had to survive the bombshell of the illegal release of the Access Hollywood tape that would have destroyed any other candidate. Instead, Trump fought back by refusing GOP calls to exit the race and, in fact, bringing three women who accused Bill Clinton of sexual misconduct to the next debate as his special guests.

Trump’s instinct to fight back served him well throughout his business career, in the 2016 campaign and it will serve him well as President. He needs to be continually fighting because no U.S. President has had to contend with as many political enemies within his political party, the government and the “fake news” media.

Right after his upset victory, President-elect Trump was immediately confronted by Green Party presidential candidate Jill Stein who launched a lawsuit in multiple states. She demanded recounts, alleging potential hacking and voter irregularities. When she was unsuccessful, an effort was launched to change the minds of Trump voters in the Electoral College.

Once it was clear that Donald Trump was going to take the oath of office and become President, opponents organized protests throughout the country seeking to invalidate his victory. From the Women’s March on the day following his inauguration to the recent Antifa protests, the left has not stopped in their efforts to oppose the President.

For eight years, George W. Bush was totally silent about then President Barack Obama’s liberal policies, but on several recent occasions he has criticized his fellow Republican, President Donald Trump. Obviously, Bush views Trump differently, as actually a threat to the political establishment which dominates both political parties.

These “country club” Republicans want to wrest back control of the party and are desperately trying to thwart the Trump agenda on Capitol Hill. One of their favorite swamp creatures, U.S. Senator John McCain (R-AZ) torpedoed the GOP legislation to repeal and replace Obamacare. Another establishment pet, U.S. Senator Bob Corker (R-TN) has questioned the President’s mental acumen and blasted both his judgment and his policies.

It is no surprise that the President is having trouble getting his agenda passed on Capitol Hill. The GOP is hopelessly split with “Never Trumpers” like U.S. Senator Ben Sasse (R-NE) and establishment Republicans like McCain and Corker regularly contesting and criticizing him, and a united Democratic Party opposing everything he supports.

Another challenge for the President is the left-wing media, which constantly demonizes him and saddles him with 92% negative coverage, according to the Media Research Center. For eight years, the media had a love affair with Barack Obama, who could do nothing wrong, now, in their eyes, President Trump can do nothing right.

President Trump also has the unique task of overcoming a federal bureaucracy that is opposed to his agenda. These “deep state” holdovers from previous administrations are leaking his calls to foreign leaders and trying almost every possible tactic to embarrass the President and stop his policy goals from being implemented. Clearly, President Trump is a threat to the globalists in the government who want the United States to follow down the path of international trade deals and climate change accords.

Unquestionably, in the past year, the “swamp” has literally thrown everything at Donald Trump to deny his victory and impede the will of the American people. He is in the middle of a Special Counsel investigation even though there is no evidence of Russian collusion. This team of partisan Democrat attorneys is trying every possible tactic to bring down Donald Trump.

The President’s only chance of success is for the “deplorables,” the 63 million Americans who voted for Donald Trump, to rise up and question the Special Counsel, confront the biased media and demand the weak GOP congressional leadership start passing legislation to advance his agenda.

Donald Trump needs his supporters now more than ever because he is surrounded by an ever-growing list of enemies who are working overtime to nullify the 2016 presidential election results.