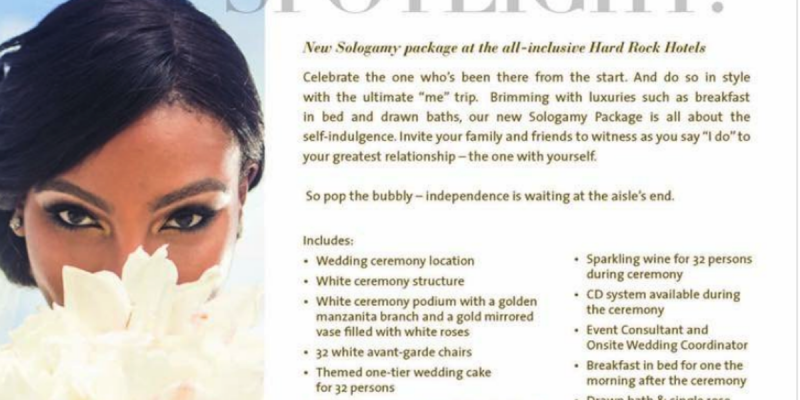 Today, you can even buy a sologamy package at Hard Rock Resorts:

📣📣You heard it here first! Hard Rock Resorts just launched a SOLOGAMY package! 😳 Would you “marry” yourself as a single person?
#Sologamy pic.twitter.com/rorAEesXKD

Otherwise known as “sologamy,” self marriage is not recognized in the U.S. or in Europe. Yet, more reports are surfacing of individuals marrying themselves. Timothy George described sologamy in First Things as “the marriage of someone to one’s own self—the his- or herness of it is not relevant, although it seems to be mostly women who are doing it.”

The first person to marry herself to herself was Linda Baker in December 1993. Another is Sara Sharpe, who wrote about her self-marriage in A Dress, A Ring, Promises to Self.

The Houston Chronicle also reported on a woman, Yasmin Eleby, who “married herself at the Houston Museum of African American Culture…in a lavish ceremony with 10 bridesmaids in attendance, plus family and other guests on hand to celebrate the event.” Her ceremony was illegal, not recognized by the state or federal government as marriage. Her sister performed the “ceremony,” and Yasmin went on a honeymoon with herself to “Cambodia, Laos, and a jazz festival in Dubai.”

CNN’s Anderson Cooper interviewed a North Dakota woman, Nadine Schweigert, who married herself in front of her roughly forty close friends. These were her vows:

“I, Nadine,” she said to herself, “promise to enjoy inhabiting my own life and to relish a lifelong love affair with my beautiful self.”

There was also the Dutch woman, Jennifer Hoes, who married herself. Aeon Magazine conveyed her story in a ten-minute documentary, called, “Marrying Me.”

TheLidBlog.com highlighted excerpts from Stylist Magazine that described the self-marriage of Sophie Tanner who married herself in a ceremony performed by her friend who wore a rented bishop’s costume.

Of her day, Sophie said:

I got married to myself; I was ridiculously happy and the vibe was amazing.

The sun shone brightly and all 20 bridesmaids showed up for a quick dance rehearsal and some bubbles. Then we picked up our sunflowers and processed through the Pavilion Gardens to the sound of whooping crowds. Kendrick Lamar’s I Love Myself blasted over our portable speakers as we danced past the lawns.

I’d hired my friend James a cardinal outfit and he was waiting for us at the Unitarian Church stage, looking resplendent in his red robes. My Dad gave me away in traditional style, then James delivered the ceremony with fantastic aplomb and more and more people gathered to see what was going on, gasping in fascination when they heard it was a self-wedding.

Vice Magazine also reports that Tanner remarked that “her love [for herself] grew after” after she married herself.

(…) in the honeymoon period there was a change. I was more, ‘You know what? We’re going to have a night in together.’ There was a sense of treating yourself and indulging. People ask if I want to get married and I can say, ‘Actually, I’m already married to myself.’ You don’t have to worry any more. You’re not waiting around for the one because you are the one. You’ve found that person.

George suggests this behavior is reflective of extreme narcissism embraced by an ever-increasing narcissistic culture:

In some ways same-self marriage is the logical outgrowth of what cultural critic Christopher Lasch described in his 1979 bestseller The Culture of Narcissism. Lasch, building on Sigmund Freud’s classic essay ‘On Narcissism’ of 1916, applied the term to the sense of grandiosity and excessive self-love that seem to mark not only psychologically disordered individuals but post-sixties American society as a whole.

Interested in more national news? We've got you covered! See More National News
Previous Article Is Sex with Animals Really Just Another ‘Lifestyle Choice’?
Next Article CROUERE: Who’s The Ringside Politics Turkey Of The Year? Who Else But Mitch Landrieu?