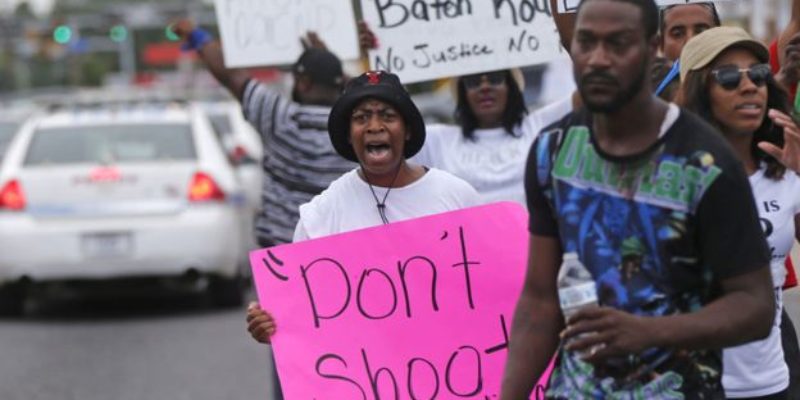 Our readers are going to love this. It’s a letter by the American Civil Liberties Union (ACLU) and the Louisiana chapter of the National Lawyer’s Guild sent yesterday to the mayor-president, parish attorney, chief of police and Baton Rouge Metro Council members haranguing the city’s government and law enforcement over the question of how it should treat protesters who might surface in the wake of Monday’s shooting of the (probable) drug dealer and (unquestionable) child abuser Calvin Toney.

Without too much ado, let’s just cut this loose and let you digest it…

The American Civil Liberties Union of Louisiana and the Louisiana chapter of the National Lawyers Guild are calling on local government and law enforcement authorities to respect the First Amendment rights of protesters as the investigation into the shooting death of Calvin Toney by a Baton Rouge police officer continues.

As you may recall, in November 2016, after a series of unconstitutional law enforcement reactions to protest over the death of Alton Sterling in Baton Rouge, law enforcement entered into a Memorandum of Understanding with five organizations that filed suit regarding the treatment of peaceful protesters.

The Baton Rouge Police Department, East Baton Rouge Parish Sheriff’s Office, the Louisiana State Police, and the City of Baton Rouge entered into an agreement, filed in court records, guaranteeing their commitment to the First Amendment rights of everyone, a commitment to use only the level of force objectively reasonable to bring an incident under control and only arrest those who they have reasonable belief to have violated the law, and commit to de-escalation.

The people of Baton Rouge have a constitutional right to make their voices heard – a right that state and local law enforcement have a solemn obligation to uphold. The ACLU of Louisiana pledges to hold police accountable for safeguarding the constitutional rights of the people they’re sworn to serve.

Law enforcement will also be held accountable to adhering to their commitments made after the mass violation of civil rights of demonstrators last summer. The National Lawyers Guild again is providing trained Legal Observers to monitor and document law enforcement actions, and will be providing other forms of legal support to the movement to hold police accountable for any misconduct and to ensure that demonstrators’ First Amendment rights are protected and respected without retaliation in the form of state violence.

Please feel free to contact us with any questions. Thank you for your cooperation.

The lesson we took from this is pretty easy – namely, that it’s very obvious now what a mistake it was for the city-parish to agree to settle with the social justice warriors and other kooks who staged their Black Lives Matter extravaganza following the Alton Sterling shooting last year. The police who arrested those people did so after projectiles were hurled at them, injuring one of them at one of the two protests which began taking on the characteristics of a riot, and in both cases when the protesters began attempting to occupy an interstate highway – an act of incredible irresponsibility that on I-10 and I-12 in Baton Rouge would almost assuredly cause a major wreck with an 18-wheeler.

Nevertheless, the politicians weakly chose to settle. In doing so, they gave the ACLU the upper hand to make future demands on behalf of people who would protest the shooting of a child abuser who opted to get rough with a policeman. Just think about how unhinged and depraved you have to be to want to turn somebody as worthless as Calvin Toney into a martyr, and then consider the ACLU’s demands.

The cops were right to handle the Alton Sterling protests the way they did. The politicians screwed that up by admitting guilt when there was none. And now Baton Rouge is at the mercy of the ACLU and the Silky Slims of the world. Hopefully they’ve learned their lesson, though it’s a good bet they haven’t.