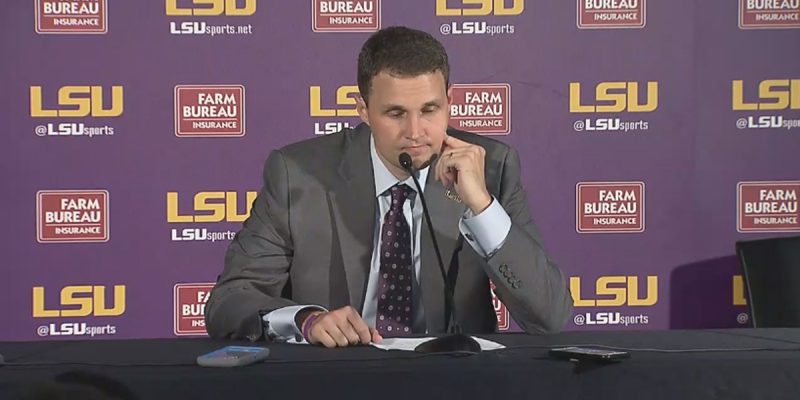 …and this is why we absolutely love this guy. Wade isn’t like the other coaches LSU has had through the years in basketball – his predecessors would have a game in which their team hung 105 points on a club which won 20 games the previous year and returned five starters and would proceed to gush in the postgame press conference about how well their offense played.

We knew from seeing the game last night that the coach’s postgame press conference would be epic. LSU got out to a 20-point lead that it more or less held the whole game early in the first half, and never stopped scoring. In a game like that it’s not uncommon that a decent opponent would take advantage of some slack defense in order to pad their own stats in what’s essentially garbage time. Which Samford, despite having suffered blowout losses to both Arkansas and LSU so far this year, is, and which Samford did. When it was over, the visitors had shot an outstanding 15 of 29 from the three point line, including 11 of 18 in the second half, as LSU substituted freely with a big lead.

But along the way as Samford drained those three-pointers, many of them uncontested from far beyond the arc, Wade was on the sidelines fuming. And when the game was over the coach had a look on his face which did not fit the final score; he was completely disgusted. Particularly since in the aftermath of the season opener, a 99-59 blowout of Alcorn State, he had groused about the 16 uncontested three-pointers Alcorn had shot. In that game the opponent wasn’t good enough to take advantage, shooting just 4-for-24 from beyond the arc; Samford is a lot better team with much better shooters.

The mood didn’t improve when Wade got to his post-game press conference, which was every bit what we thought it would be.

Here’s a partial transcript, in case you can’t watch the video…

Opening Statement: “Well, I’d like to give Samford credit. They played extremely hard. Their guys played hard until the last whistle. The second half was just terrible. 58 points, I don’t know if I’ve ever seen a team give up 58 points in a half. That’s what you should give up for a game. I’m really, really disappointed with our point-of-attack defense, our ball-screen defense, the amount of threes we gave up. It was terrible. I was embarrassed. We couldn’t get off of the court quick enough. That was just embarrassing. If that doesn’t improve, it’s going to be a long trip out West. It will be a long trip. On the plus side, we shot it well from the free-throw line, 29 assists on 39 made baskets. That stuff is all good. I thought our rebounding was not good enough. We took a step back in rebounding. They had 15 offensive rebounds. We had 13. Give them credit, they played extremely hard.”

On the second half, in which LSU put up 58 points: “We communicated better. Our want to was better. It takes a complete game to beat good teams and we have yet to play a complete game. We have a really good team coming up on Monday. It’ll be a long night.”