Lost a bit in the Thanksgiving festivities last week were the opening shots in what could well turn out to be a messy squabble over a political favor hire made by Gov. John Bel Edwards which has gone toxic. If you’re not familiar with the resignation of Johnny Anderson, who until last Wednesday was the Deputy Chief of Staff for Programming and Planning in Edwards’ administration, here were the particulars…

One of Governor John Bel Edwards’ staff members has resigned amid allegations of sexual harassment.

A spokesperson with the governor’s office confirmed the resignation of Johnny Anderson Wednesday night. “We take these allegations very seriously. Upon commencement of the investigative process, Johnny Anderson resigned from the governor’s office. The investigation will continue, and we are unable to comment any further,” said Richard Carbo, Edwards’ deputy chief of staff.

“Governor Edwards has zero tolerance for sexual harassment and it will not be tolerated in this administration,” said Carbo.

LaPolitics.com made a public records request Wednesday morning, and by the evening, Anderson had resigned.

So far, the complaint against Anderson hasn’t surfaced so we don’t know what sort of lecherous behavior he’s accused of. We have a bit of context, though, because this kind of thing has happened before with him.

Anderson, as it turns out, was a prominent figure in the last Democrat administration to occupy the governor’s office. He was the assistant chief of staff to Kathleen Blanco in 2007, and not only that he was the chairman of the Southern University Board of Supervisors.

And he made a grand mess of things back then.

Anderson was previously accused of harassment in 2007 by two Southern University employees while he was the chairman for the Southern’s Board of Supervisors. At that time he was Gov. Kathleen Blanco’s assistant chief of staff.

University President Ralph Slaughter then filed a lawsuit against the Board of Supervisors and Blanco alleging they retaliated against him after he revealed sexual harassment complaints from female employees against Anderson. Slaughter settled with the university and asked that the lawsuit be dismissed.

Anderson said Thursday that he temporarily stepped aside from his chairmanship duties after those allegations were made so that the board could conduct an investigation. He said he was later exonerated and reinstated as chair.

“I didn’t have anything to hide and I wanted them to look at it and to see and to allow the human resources office to investigate, which should have happened from the beginning,” Anderson said Thursday.

Well, that’s one interpretation of what happened. Another interpretation would be that Anderson and his pals on Southern’s board paid hush money to the women accusing him of getting handsy with them, and when Slaughter (who by the way is an unmitigated disaster in his own right; he’s something of a Typhoid Mary of corruption scandals) objected to those funds being paid out he was sacked for his trouble and then got his own hush money – all of which you, Dear Reader, paid for with your tax dollars.

But Anderson now says he’s going to clear his name as a private citizen, because these allegations are bunkum. He says.

“When malicious people get involved and try to scandalize your name and any time you get to certain levels, some people decide that that’s what they want to do (and) how they best will take you down, but I’m not going to sit by and let that happen.”

Julia O’Donoghue from NOLA.com did a little more background work on all this than the Advocate did, and the cover story that Anderson was falsely accused suffers a bit from that research…

He was accused of sexually harassing women at Southern University in 2006, when he served as assistant chief of staff to then-Gov. Kathleen Blanco and was chairman of the Southern’s Board of Supervisors. Six women at the school, including one student, had complained about Anderson, according to a 2007 federal court ruling.

Anderson also denies there was any merit to those allegations and said he was later “exonerated.” He cited an independent investigation Blanco launched that found “no evidence” that Anderson had acted inappropriately, according to news articles from 10 years ago. A federal investigation into the harassment also appears to have been launched by U.S. attorneys, according to news reports from 2007, but no charges were ever brought against Anderson.

When the sexual harassment allegations surfaced in 2006, Blanco refused to dismiss Anderson from her office. He also stayed on the Southern board, stepping down temporarily as a chairman, while the investigations were underway.

Blanco hired attorney Mark Falcon to look into the sexual harassment allegations against Anderson when they surfaced. Falcon didn’t find any evidence that Anderson had harassed anyone, according to a report he issued in April 2007. But Falcon also didn’t personally interview any of the women making the accusations.

When Falcon called one woman making the allegations on the phone, he reported that she “blasted” him for contacting her. Falcon then relied on Southern to put him in contact with the other women, but he said Southern University’s president at the time, Ralph Slaughter, wouldn’t cooperate with him. According to news reports from that time, Slaughter said he was uncomfortable turning over information to Falcon because the attorney was working for Blanco, who had Anderson on her personal staff, and he wanted to protect the privacy of the women making the accusations.

U.S. District Judge Ralph Tyson, chief judge of Louisiana’s Middle District, thought the allegations had merit. Based on the “uncontradicted” testimony of two women, Tyson wrote in a July 2007 ruling that “on at least two occasions, Louisiana law prohibiting sexual harassment in the workplace was violated in that unwelcome sexual advances were made by Anderson to a university employee.”

If you’re catching a vibe that Southern is more or less a corrupt good-ole-boys club with a siphon into the state treasury more than it is an institution of higher learning, and that Johnny Anderson is basically the Brandon Dumas of a decade ago, congratulations. You are paying attention. If you’re more than a little irritated that a governor would opt to inflict that cabal on the taxpayers by bringing one of them into the Fourth Floor on your dime, you’re officially an informed and engaged citizen.

It doesn’t appear Sharon Hewitt is a big Johnny Anderson fan, and it also looks like Hewitt hasn’t bought a ticket on the Exoneration Train. Here was Hewitt yesterday in a press release…

The request comes less than a week after the resignation of Anderson, Gov. Edwards’ deputy chief of staff for programming and planning, who was recently accused of sexual harassment. Anderson was also previously accused of sexual harassment in a case that was embroiled with controversy in 2007, while he was serving as former Gov. Kathleen Blanco’s assistant chief of staff.

Sen. Hewitt says providing oversight and evaluating the transparency of the state government’s handling of Anderson’s hiring and investigation, as well as other sexual harassment and misconduct accusations, is relevant at both the local and national levels. In the last week, reports have revealed that the U.S. Congress Office of Compliance spent two decades settling a total of 264 complaints using $17.2 million in taxpayer money.

“Louisiana citizens deserve to know how someone with a history of sexual harassment allegations managed get a high paying job on the governor’s executive staff,” Sen. Hewitt said. “A full investigation into this situation will tell us whether it was a failure of our state policies or of our politicians, who put women in harm’s way again. If it was a failure of our policies, then the solution will be clear. If it was the result of a politician rewarding a politico, despite their background, then the voters deserve to know.”

Among the items requested in the performance audit are a review of the state’s policies and practices relative to examining a job applicant’s background, along with statistics from the Office of Risk Management and/or Civil Service on the number of sexual harassment claims and the amounts paid out over the last five years.

Sen. Hewitt is also calling for an evaluation of Louisiana’s sexual harassment policies and comparisons to related policies in other states, as well as recommendations for assisting the state in strengthening its policies, procedures and laws pertaining to sexual harassment.

“Sexual harassment has no place in state government or in the private workplace,” Sen. Hewitt writes in the letter. “All people have the right to work in a safe environment, without unwanted sexual advances or pressure to trade sexual favors in exchange for job security or promotions.”

And here was the letter Hewitt sent to Purpera… 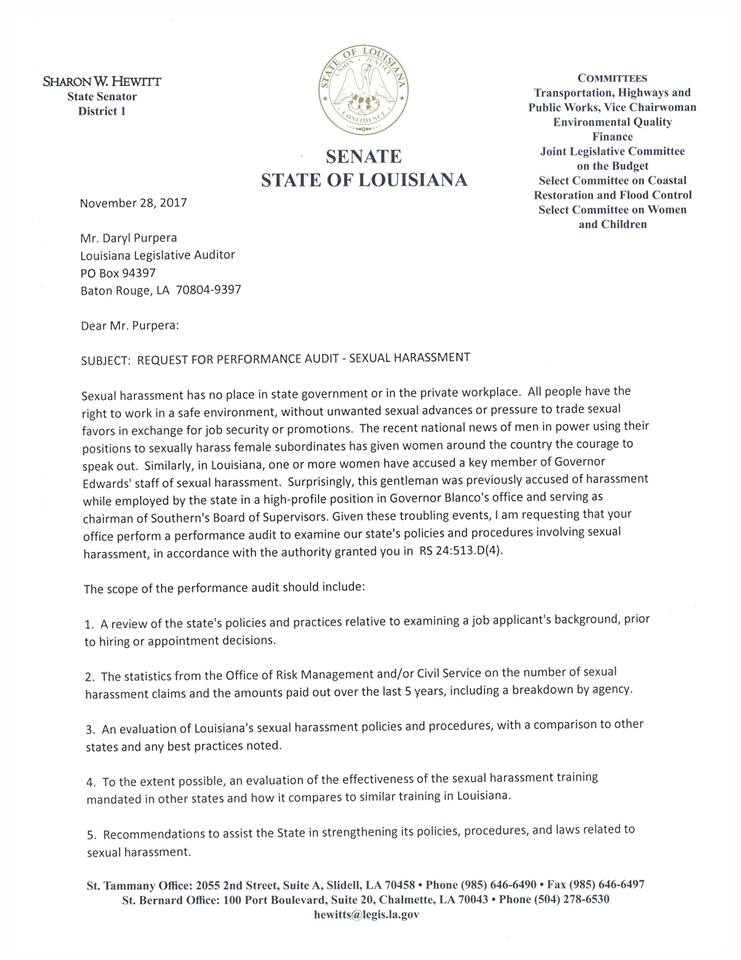 Hewitt’s decision to make trouble for Edwards over the Anderson matter is appropriate, because one of two things is true – either Edwards is running an administration so sloppy and incompetent that he didn’t know he was bringing a walking sexual harassment lawsuit engine into the Fourth Floor, in which case lots of other questions about the quality of governance Louisiana is currently receiving start to become a bit clearer, or Edwards knew all about Anderson and didn’t care because hiring him checked off some patronage boxes.

The latter is, of course, the correct answer – and the worse one. Edwards may have run on the fact he was a West Point graduate and supposedly lives his life by its honor code, but we can comfortably say that’s a lie. It didn’t matter that Anderson was a lecher and a maker of messes; he used to be Cleo Fields’ chief of staff and he knew all the right folks in the black community so he had to get access to the public patronage teat upon a Democrat’s election – and if he couldn’t behave himself around the females and it couldn’t be hushed up, then he’d have to go.

Bad behavior isn’t a partisan thing. Something like this could easily happen in a Republican administration. What’s egregious about it is that Johnny Anderson was a known commodity and he still caught Edwards’ patronage. It’s unseemly that a second bite at the apple would be on offer, and here’s hoping Hewitt is able to burn the governor and his people for it.