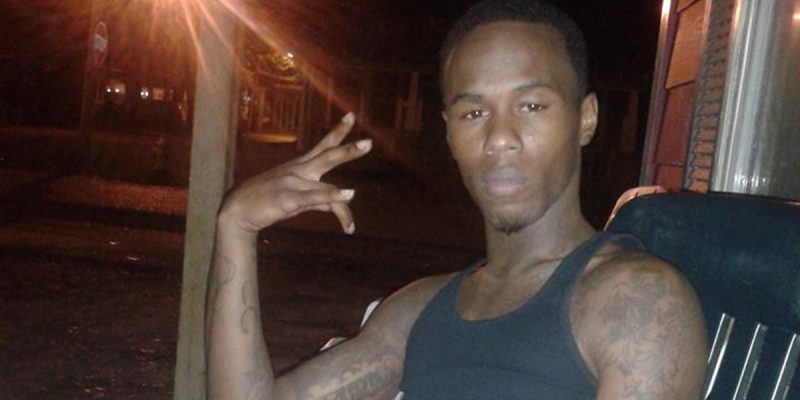 Last night’s police shooting in Baton Rouge will be an interesting test of what motivates the protesters/rioters/social justice warriors who popped up after the Alton Sterling fiasco last year. The facts of this new case are not the same as in the Sterling case, as Calvin Toney was a different guy in a different situation – and the Baton Rouge police officer who shot him is a much different individual than Blaine Salamoni…

Troopers with Louisiana State Police are investigating a deadly shooting by a Baton Rouge police officer during a struggle, as they worked fast to put to rest a social media rumor that was only making matters worse.

Family members have identified the man as Calvin Toney. He was pronounced dead at the scene by the East Baton Rouge Parish Coroner’s Office. Officials have not yet confirmed the identity.

State Police said the trouble started at the Palms Apartments on McClelland Drive just after 6 p.m. when officers with the Baton Rouge Police Department were asked to escort a Department of Children and Family Services (DCFS) case worker to the complex.

“During the course of that investigation, a struggle ensued with officers and the suspect,” said Sr. Tpr. Bryan Lee with LSP Troop A. “The suspect was shot and killed during that struggle.”

It is standard procedure to have Louisiana State Police investigate a shooting involving a police officer. Troopers would not say whether the man had a gun, but authorities did confirm that the struggle lasted several minutes and that the man was “tased” before being shot. They also worked to dispel a rumor that quickly spread on social media following the shooting.

“Our preliminary investigation shows the suspect was NOT handcuffed at the time he was shot,” Lee explained.

So basically you have a child abuse case and Child Protective Services was called, and Toney decided to get rough – we don’t know if he was the perpetrator of the child abuse or if he was trying to protect the perp. Either way, Toney found out the absolute hardest way that getting rough while the cops are there will only end badly.

Witnesses telling me now that this shooting involves a black @BRPD officer and black suspect who was reportedly tased before being shot. The officer was here as an escort for a @LouisianaDCFS investigation @WAFB

In addition, Baton Rouge’s distract attorney Hillar Moore said that the struggle between the police officer and Toney lasted “many minutes” before the shooting.

And when it was over, a crowd massed at the police line outside the scene with all the usual Black Lives Matter shouting…

Police cordoned off an area within the complex parking lot, and dozens of people gathered outside the crime tape for hours after the shooting. Tensions ran high with several onlookers loudly addressing officers standing near the perimeter.

More than two hours after the shooting, tension erupted into chants of “back up don’t shoot.”

Meanwhile, Baton Rouge mayor-president Sharon Weston Broome dispatched herself to the scene begging everyone for calm.

“I am sure that the [Louisiana State Police] will demonstrate the highest level of transparency throughout this investigation. I ask that the community withhold judgment on this incident until the LSP concludes its work,” she said in a statement.

We’ll see if this develops into a circus the way the Sterling case did. This is a much different case, though, for a number of reasons.

First, everybody involved here is black. The mayor is black, the cop and the man he shot are and were black, the child was black, everybody in the apartment complex is black with a possible exception here and there, the state trooper giving the press conference is black. The only white people on the scene were Moore and the TV reporters. So if Black Lives Matter or other similar groups were not to show up and attempt to exploit this, then we’ll know what motivates them is anti-white racism.

Or maybe it’s just anti-cop bigotry and a black cop who shoots a black guy is an Uncle Tom, or something.

Or maybe the usual suspects just need material, and any port in a storm will do.

Second, we don’t know all the facts on the ground here – but it could well turn out that if Calvin Toney becomes a cause celebre we’ll see the social justice crowd taking up for a child abuser. It turns out that the Baton Rouge police arrested a Calvin Toney in 2014 for a home invasion, and there was a history behind that arrest…

Baton Rouge police on Monday arrested a 20-year-old man accused of walking into his ex-girlfriend’s home June 9, grabbing her by the throat, throwing her against a wall and choking her.

Calvin Toney entered the home through an unlocked side door and became enraged at his ex-girlfriend because their daughter is scared of him, the arrest warrant says.

Toney left the girl sitting on a counter next to a hot stove on Oct. 2, 2012, and walked away, police records show. The girl, who was 1 year old at the time, suffered third-degree burns to her arm, wrist and hand. Doctors found multiple fractures in various stages of healing on the girl’s body, and police arrested both parents.

Court records show both the mother and Toney received five years of probation after pleading guilty to cruelty to a juvenile.

The victim told police the child was in the house during the June attack, the warrant says.

Toney, 3765 Eaton St., Baton Rouge, was booked into Parish Prison on a count of home invasion. 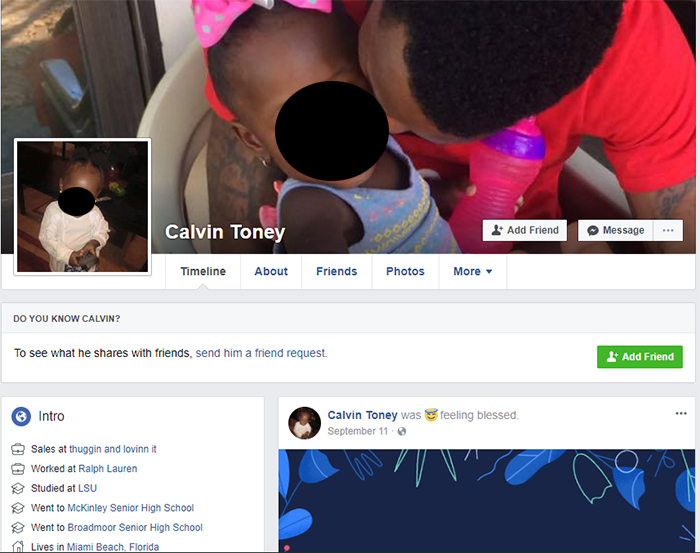 It’s far too soon to take the position that this was a “good” shooting, but based on appearances you really don’t have all that sympathetic a “victim” here. What it seems like is you have a recurrence of somebody who abused his daughter and perhaps the daughter’s mother, and when the authorities were called in he tried to abuse them as well and paid the ultimate price for that bad decision.

If that turns out to be the truth of what happened and we still have protests over the Calvin Toney case, we’ll know everything we need to know about the people in the streets.

UPDATE: The rumor that Toney was handcuffed when he was shot was apparently spread by none other than Arthur “Silky Slim” Reed, which should surprise absolutely no one. 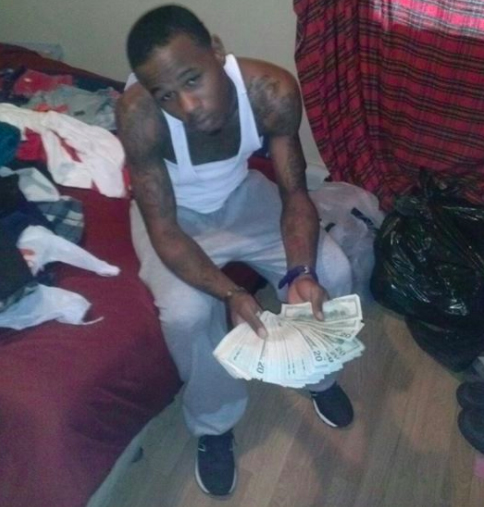 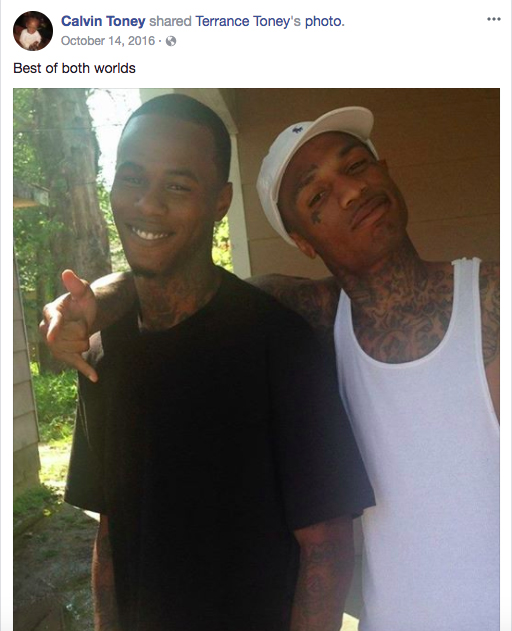 Terrance Toney being this inmate of East Baton Parish Prison… 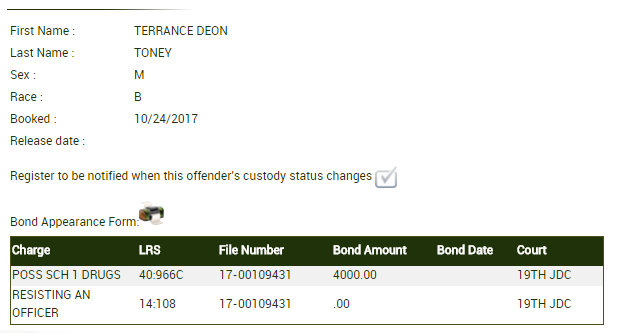 This is not to dump on the victim, but it’s pretty clear what you have is a culture of drugs, drug dealing and domestic abuse. And that poor little girl has been subjected to all of it for her entire life. No wonder DCFS was called to the scene last night.