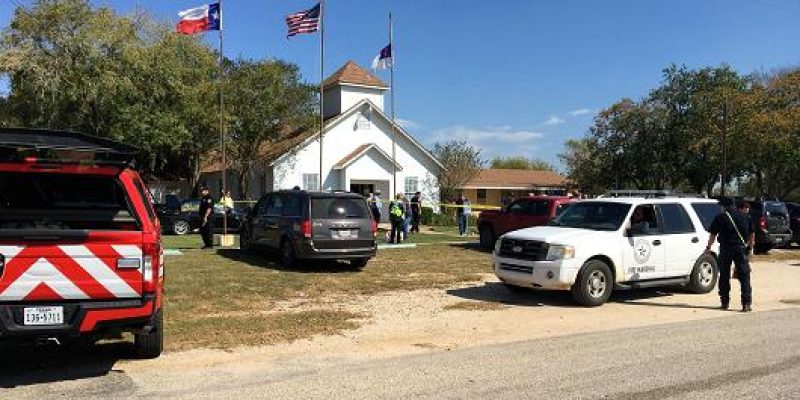 Today, Texans experienced the largest mass casualty shooting in state history. Much of the details are still unknown, but here’s what we do know about the shooting in Sutherland Springs.

The shooting began around 11:30 AM in the small unincorporated community of Sutherland Springs, Texas. The community is around 30 miles from the city of San Antonio, Texas. The church, First Baptist Church of Sutherland Springs, holds their Sunday services at 11 AM. The church has a regular attendance of around 50 or so people in a town that has a little over 600 people. According to law enforcement sources, the shooter was identified as Devin Patrick Kelley. Kelley opened fire on the attendees during the service dressed in full tactical gear, killing 26 people and injuring 20 others. 23 of these died in the church, with two dying outside and another died at a hospital. Victims have ranged from the ages of 5 to 72 years old. Among the dead was the pastor’s 14-year-old daughter. According to the authorities, Kelley fled the scene after a neighbor opened fire on him during the attack. Kelley was then surrounded by police after he fled, and his life came to an end. It is not certain as of yet if he committed suicide or was shot while on the run.

According to the authorities, Kelley was 26 years old, was an Air Force veteran who was dishonorably discharged, and was from New Braunfels. As of yet, a motive has not been determined for the massacre.

Public officials have given an outpouring of prayers and support following the massacre. President Trump tweeted, “May God be w/ the people of Sutherland Springs, Texas. The FBI & law enforcement are on the scene. I am monitoring the situation from Japan.” Others, such as Paul Ryan, Ted Cruz, and Ivanka Trump, also sent their prayers.

Undoubtedly, there will be more to come on this story. However, for now, much of this terrible story remains shrouded in mystery. Our prayers remain with the entire town of Sutherland Springs and the state of Texas as they mourn the loss of 26 innocent citizens.