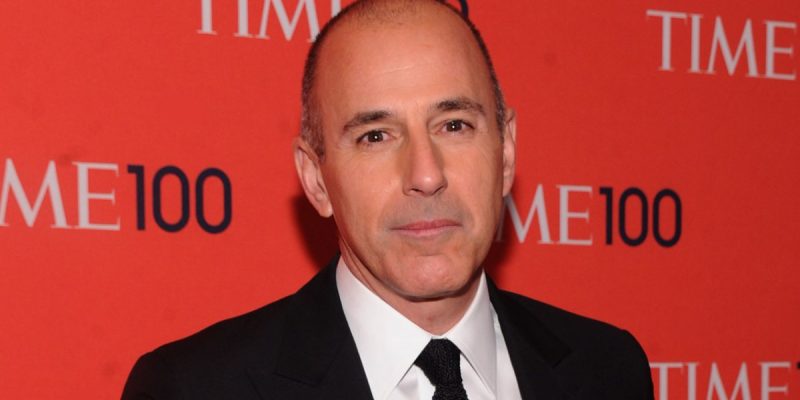 In case you haven’t heard, we have just been given a reprieve from having Matt Lauer inflicted on us every morning on the TODAY show on NBC. It appears Lauer was the subject of a complaint made to NBC’s Human Resources department over behavior with a staffer at the 2014 Sochi Winter Olympics…

An NBC insider said Lauer’s alleged victim complained to HR on Monday: “This happened so quickly. She didn’t go to the media, she made a complaint to NBC’s human resources, and her evidence was so compelling that Matt was fired on Tuesday night. The victim says she has evidence that this has also happened to other women, but so far we don’t have evidence of that.”

Another source tells us that the decision to fire Lauer was made late Tuesday night by NBC News chairman Andy Lack.

Lauer’s firing comes amid rumors that several news outlets were working on stories about his alleged sexual misconduct.

Reporters for the New York Times had been investigating Lauer for several weeks, according to sources who had been contacted by the paper, CNN reported.

“On Monday night, we received a detailed complaint from a colleague about inappropriate sexual behavior in the workplace by Matt Lauer. It represented, after serious review, a clear violation of our company’s standards. As a result, we’ve decided to terminate his employment,” Lack wrote.

“While it is the first complaint about his behavior in the over twenty years he’s been at NBC News, we were also presented with reason to believe this may not have been an isolated incident,” he continued.

“Our highest priority is to create a workplace environment where everyone feels safe and protected, and to ensure that any actions that run counter to our core values are met with consequences, no matter who the offender.

“We are deeply saddened by this turn of events. But we will face it together as a news organization — and do it in as transparent a manner as we can.”

So here’s what’s much more likely to be the truth than NBC’s cover story presented to the public.

First of all, the idea that nobody at NBC had any idea Matt Lauer was behaving in ungentlemanly or sexually inappropriate ways toward female employees over the last 20 years is utter and complete bullshit, and it will be exposed as such by the end of next week if not sooner. Whether there were any formal complaints entered into his file or not, there would inevitably have been gossip around the water cooler about him – so when this staffer came forward and Lauer was dumped in no time flat, all it really signaled was that now the management had something to act on.

Second of all, this whole thing is less about sexual harassment or the seriousness of the charge – it might well have been a very serious bit of misbehavior, don’t get us wrong – and a lot more about the $20 million a year NBC pays Lauer. This gives the network an excuse to dump that salary – because let’s face it, this is Matt Lauer we’re talking about. He’s hardly indispensable, and paying him $20 million was a giant mistake. Everybody over there knew that was a waste of money.

We’re a little torn about all of this. Not Lauer getting fired – what that brings to mind is the old saying attributed to Sun Tzu –  “If you wait by the river long enough, the bodies of your enemies will float by.” Matt Lauer has been such a moralizing, politically correct jackass and has treated conservatives so badly for so long that it’s about time somebody did something to get him off the air. To hell with Matt Lauer.

What we’re torn about is this larger business of demanding people be fired over these mushrooming sexual harassment allegations – a lot of whom are no doubt true and those being fired are, in more cases than not, guilty as sin.

We don’t condone lecherous behavior aimed at unwilling females in the workplace. That’s a sure sign of bad character, and it ought to be no surprise that so many of those who exhibit it publicly preen about their commitment to treat women equally and so on. Al Franken, for example, set himself up as the best friend of the feminist movement while privately showing a pattern of unwanted sexual advances. Ditto for Harvey Weinstein, John Conyers, Charlie Rose and whoever else you want to add to this mix. Lauer is no different.

And if the current sexual harassment hysteria occasions a return to higher standards of behavior, whether in the workplace or elsewhere, that’s a good thing. Society worked pretty well for thousands of years when there was an expectation among the better people that men would refrain from treating women as sex objects, and that more or less went out the window in the 1960’s and 1970’s with the “anything goes” mentality the Sexual Revolution brought on. Rather than liberating women, it gave license to men of low character to engage in inappropriate behavior and cheapened the relationship between the sexes. This current panic might well result in higher standards of behavior across the board. Higher standards of behavior are almost always a good thing.

What worries us is the downside of all this which is bound to come – namely, that this panic will bring with it even more acceptance of downright misandry on the part of those who run our culture. What needs to come from the sexual harassment panic is a celebration of the men of high character who behave appropriately toward women they work with and for those men to be held up as role models and a standard for others, but what’s more likely is the narrative that all men are sexual abusers and predators and therefore women should just be put in charge.

News flash: neither sex is inherently better. You might have less sexual harassment with a woman in charge, but you might have more tyrannical behavior of a different character. Does anybody really want to work for Leona Helmsley or Anna Wintour?

And the other thing which worries us about this panic is the effect it’ll have on relationships between the sexes and the creation of functional families in our society. At this point any guy who likes a female colleague at work in a romantic way is either going to refuse to act on it, even if she initiates something, or else he’ll be so careful about making an advance that she’s likely to be unimpressed. That most of the high-profile abusers who have surfaced recently are married men rather than eligible single people won’t really matter – the reaction among men will be that it’s not worth losing your job and destroying your career just to hit on some chick at the office.

And then what happens? How are we going to get men and women together and create the next generation of kids who’ll pay our Social Security checks?

There is good and bad in this. We wish we had more faith it would be handled well.