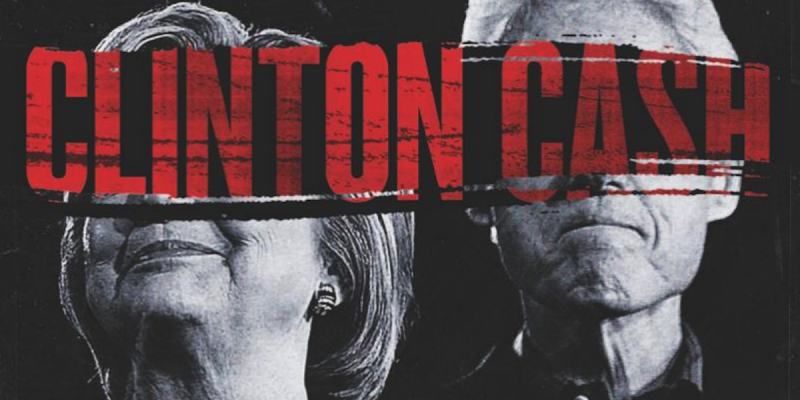 This Christmas, a great gift is the book, Clinton Cash, which exposes the incredible global conspiracy of corruption and wealth amassed from it by Bill and Hillary Clinton. A documentary based on the book is below.

Clinton Cash describes how the Clintons went from “Dead Broke” after leaving the White House to amassing a net worth of over $150 million, with over $2 billion in donations to the Clinton Foundation. Despite the criticism of the book, the facts it reveals have been vetted and confirmed by mainstream media outlets and the Panama Papers.

As Peter Schweizer reveals, the Clintons orchestrated a scheme of pay to play using the State Department and a well-developed pattern as follows:

Every single time Bill Clinton received large speaking fees from foreign businesses and governments, the interests of these governments were pending approval by the State Department. Pay for play took place in Haiti, Nigeria, Kazakhstan, Colombia, and with the Russian government.

Here are just a few of many examples:

The Real Russian Scandal: While Hillary Clinton was the Secretary of State, one of the Clinton Foundation’s donors, Canadian financier, Frank Giustra, and his company, Uranium One, was given the the acquisition to mine uranium in Kazakhstan and the US. The Russian government purchased uranium from Uranium One after receiving approval from the Obama administration’s State Department. Prior to the State Department’s approval of the deal, nine Uranium One shareholders donated $145 million to the Clinton Foundation, including Giustra. Russia was given 20 percent ownership of US uranium assets. The New Yorker confirmed that Bill Clinton received $500,000 in speaking fees from a Russian investment bank with ties to the Kremlin around the same time.

Haiti Gold Mining Permit Awarded to Tony Rodham, Hillary Clinton’s brother. The Washington Post confirmed that Tony Rodham sat on the board of a mining company that received one of only two permits awarded in 50 years to mine gold in Haiti. This occurred while Secretary of State Hillary Clinton funneled billions of taxpayer money to “help earthquake survivors” in 2010.

Keystone Pipeline Support in Return for $2 million in speaking fees. Four days after Hillary became Secretary of State, Bill Clinton began giving speeches for TD Bank garnering more than $2 million in speaking fees. TD Bank is the single largest shareholder of the Keystone XL pipeline. In order for the pipeline to be built, it first needed State Department approval. Hillary Clinton’s public support for the pipeline helped delay the Obama administration’s rejection of it.

An obscure Indian politician made a multimillion-dollar gift to the Clinton Foundation, which coincided with Senator Clinton’s reversal on a nuclear non-proliferation treaty;

A Clinton visit to Colombia resulted in a large grant of lucrative logging rights to a Canadian billionaire and top Clinton Foundation donor.