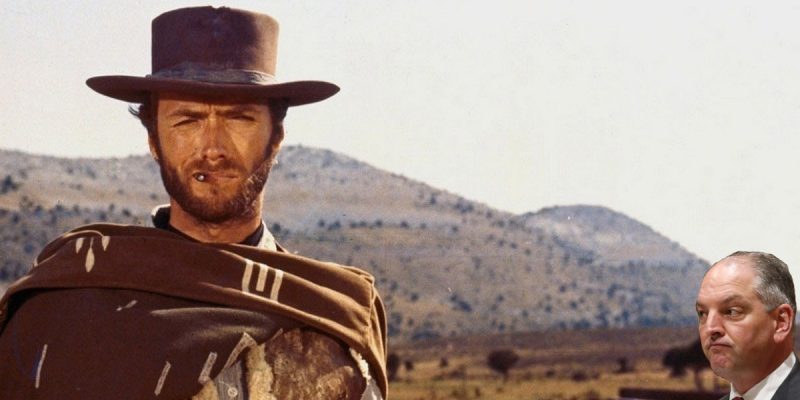 The Good, The Bad and The Ugly – this 1966 Spaghetti Western is a staple in the career of Clint Eastwood and in the heart of many young men growing up in the late 60s. Just reading the title of this film, I can hear that iconic theme music and picture the tense standoff as the camera pans from glare to glare as The Good, The Bad, and The Ugly anticipate each other’s first reach for their guns in the closing scene. Looking at the characters and how they interact in the film, you could draw parallels to Louisiana’s oil and gas industry.

Eastwood played “The Good” character that had no name, only the nickname “Blondie,” was given. He has no past, no backstory and had very little to say. Blondie was a strong individual with a callous exterior, often found with a cigar in his mouth. From the unpleasant stare on Blondie, you could see that he meant one thing and that was business. The same could be said for the successful businessman and our Commander in Chief, Donald Trump. He has increased our industry’s hope by rescinding executive orders made by the Obama administration, filled his presidential cabinet with individuals that recognize the value of our industry, and has made American energy dominance a priority. However, one way that Blondie and President Trump differ is that Blondie never had much to stay, and Trump is never at a loss for words.

Now let’s take a look at “The Ugly,” skipping the “The Bad” for now. “The Ugly” was a Mexican bandit named Tuco. Tuco was wanted in at least 14 counties, had no regard for the law, and was driven by an unquenchable thirst for gold. Tuco’s lust for gold put him into some difficult circumstances, which could also be said for OPEC as well. Previously, OPEC, in an attempt to destroy the United State’s competitiveness, flooded the market and oil prices. This move put our nation and Louisiana in some very tight financial times. Oil and gas companies were going out of business, but OPEC couldn’t survive these low prices forever. OPEC’s move was short-sighted and severely underestimated the strength of America’s oil and gas industry.

Earlier this year OPEC agreed on production cuts, which created a lack of supply in the market, and prices increased briefly. The advancement in American shale production allowed the U.S. to fill the void created by OPEC, but the price of oil saw little change. Currently, Russia and OPEC are looking at initiatives to clear global oil glut but cutting out. Now, as best written by a Bloomberg headline, OPEC wakes up to the threat of U.S. shale 2.0. As OPEC continues to try and manipulate the market, the U.S. continues to assert its oil and gas prowess.

The last character in this trifecta is “Angel Eyes” who plays “The Bad” role. He is quite possibly the most dangerous character in the film and strives to use the mantle of authority for his own personal gain. Angel Eyes was a hitman-for-hire whose only loyalty was to those that pay. This issue of paid loyalty is currently plaguing Louisiana’s oil and gas industry.

The most prominent threat to Louisiana’s oil and gas industry lies within our state’s capital city. When we look at the biggest hurdle facing the industry, it is our own Governor. The only loyalty he has shown has been to that of the copious amount of trial lawyers that backed his run for Governor. Who falls prey to this loyalty? The people of Louisiana. His lack of loyalty to his constituency has destroyed our business climate and continues to provide Louisiana with nicknames like “Worst-Run State in America,” “Worst Legal System in America,” and a “Judicial Hellhole.”

This oil and gas version of this classic western is still playing out and far from over. One thing holds true, as we pursue energy dominance just as Blondie, Tuco, and Angel Eyes sought their grave of gold, the opportunity is within arm’s reach. We must ensure that steps are taken to assert Louisiana as a major oil and gas player.

Interested in more news from Louisiana? We've got you covered! See More Louisiana News
Previous Article BATISTE: The New War At The Ole War Skule
Next Article Well, The Scalise For Governor Fantasies Were Fun While They Lasted…