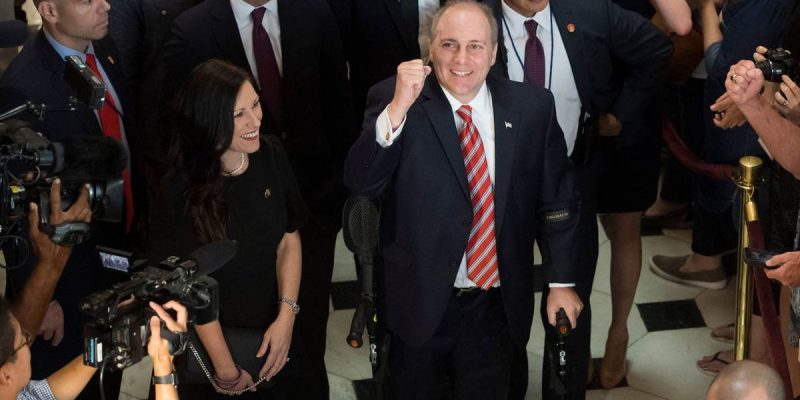 …but if yesterday’s POLITICO piece about Paul Ryan not being long for the House Speakership is accurate, the Congressman from Jefferson Parish won’t be coming home for anything like a run for governor anytime soon.

Despite several landmark legislative wins this year, and a better-than-expected relationship with President Donald Trump, Ryan has made it known to some of his closest confidants that this will be his final term as speaker. He consults a small crew of family, friends and staff for career advice, and is always cautious not to telegraph his political maneuvers. But the expectation of his impending departure has escaped the hushed confines of Ryan’s inner circle and permeated the upper-most echelons of the GOP. In recent interviews with three dozen people who know the speaker—fellow lawmakers, congressional and administration aides, conservative intellectuals and Republican lobbyists—not a single person believed Ryan will stay in Congress past 2018.

Ryan was tiring of D.C. even before reluctantly accepting the speakership. He told his predecessor, John Boehner, that it would be his last job in politics—and that it wasn’t a long-term proposition. In the months following Trump’s victory, he began contemplating the scenarios of his departure. More recently, over closely held conversations with his kitchen cabinet, Ryan’s preference has become clear: He would like to serve through Election Day 2018 and retire ahead of the next Congress. This would give Ryan a final legislative year to chase his second white whale, entitlement reform, while using his unrivaled fundraising prowess to help protect the House majority—all with the benefit of averting an ugly internecine power struggle during election season. Ryan has never loved the job; he oozes aggravation when discussing intraparty debates over “micro-tactics,” and friends say he feels like he’s running a daycare center. On a personal level, going home at the end of next year would allow Ryan, who turns 48 next month, to keep promises to family; his three children are in or entering their teenage years, and Ryan, whose father died at 55, wants desperately to live at home with them full time before they begin flying the nest. The best part of this scenario, people close to the speaker emphasize: He wouldn’t have to share the ballot with Trump again in 2020.

There have been rumors in Washington for some time that Ryan was on his way out as Speaker, and once he goes there is essentially a two-man race to replace him at this point. POLITICO talks about that as well…

Either way, the convergence of these realizations—Ryan wanting to retire after 2018, and a possible threat to his speakership even sooner—has sparked a flurry of activity in the offices of Majority Leader Kevin McCarthy and Majority Whip Steve Scalise, the two most likely successors to Ryan. Both believed Ryan would leave late next year and were therefore planning their next steps at an appropriately deliberate pace. This has abruptly changed: According to multiple GOP sources, both McCarthy and Scalise have taken recent meetings with members loyal to them who have been eager to strategize about life after Ryan. There is little chance Scalise runs against McCarthy, but the whip—knowing McCarthy lacked the votes to become speaker in 2015, prompting Ryan to accept the job—is taking careful stock of the conference, preparing to launch his own candidacy should McCarthy stumble a second time.

McCarthy has a problem which is likely going to kill his chances of becoming Speaker, namely the widely-shared rumor that he had an extramarital affair with former North Carolina congresswoman Renee Ellmers which torpedoed his chances of succeeding John Boehner as Speaker two years ago. He was talked down from running for the job then, and with the environment becoming even more perilous given the current sexual harassment craze it’ll likely be even harder to overcome those rumors this time next year if Ryan goes.

Which would leave Scalise as the Great White Hope.

As we know, he’s a superstar for his toughness and grace in bouncing back from that awful assassination attempt by a crazed former Bernie Sanders campaign volunteer, and Scalise is liked even by Democrats on Capitol Hill and elsewhere. At this point there is little reason to bet against Scalise as the next Speaker of the House in Washington.

Which means he won’t be running for governor of Louisiana. Not unless the Democrats somehow gain control of the House of Representatives in next year’s elections, something which is, despite what you might hear from the Democrats’ media organs, quite unlikely.

Scalise’s opportunities on Capitol Hill are certainly welcome for Louisiana, as a favorite son in that seat was something denied us when Bob Livingston, set to succeed Newt Gingrich as Speaker, resigned in 1998 in advance of disclosure of his own extramarital affair. But with the chance he’d become Speaker, Republicans in the Sportsman’s Paradise are back to Square One with respect to finding the perfect gubernatorial candidate for 2019 – which will be an election potentially defining the state’s future for a long time to come.

The challenges confronting Louisiana’s next governor will be daunting. Louisiana’s economy is flat on its back, having been the worst-performing in America last year with no real indication that’s changing, and what’s worse the oil industry which has been the bedrock of that economy in the times when the state has managed to grow is quite possibly dead and gone thanks to John Bel Edwards’ attempts to sue it for the loss of our coastline. When oil and gas can drill in multiple other locations, it won’t drill here and subject itself to attacks by the governor’s cabal of ambulance-chasing donors, and worse, it will take years of reassurance before the majors will be comfortable reinvesting here. That’s a disaster for markets like Lafayette and Houma-Thibodaux not just in the short term; they’ll have to attract completely new industries to replace oil and gas in order to begin growing again.

In the face of that broken economy, Louisiana is going to have to reset the relationship between state and local government, as the current one is horribly broken. Louisiana will also have to completely rebuild its system of taxation, as the current one is uncompetitive with virtually all of our neighbors. We’ll also have to re-examine the substandard performance of virtually all of the state’s public institutions. All this will need to be done within the limits of a state budget which is structurally unsound and cannot be balanced using its current rules. And within the further limits of a news media hopelessly in thrall to the Democrat Party and the special interests which fund it. Any attempt at fundamental change will be reported as an attempt to end life in the Bayou State as we know it – which would be only half a lie.

It will take a level of political skill and strength only a very few of the state’s historical figures have possessed to carry off such a package of reform. Scalise was the one candidate foreseeable to enter office with the kind of momentum to turn those wheels.

Without him, whom? The possibility of a second term for Edwards can’t be discounted, though historically it’s extremely difficult for a Democrat to secure re-election in Louisiana – that hasn’t happened since Edwin Edwards was re-elected in 1975. Conventional wisdom, with which we agree, has it that if the state’s Republicans can unite around a single challenger that candidate will beat Edwards – particularly if no progress is made on any of Louisiana’s terrible problems. If nothing else, Edwards’ implementation of the criminal justice reform package passed this spring, which seems to have consisted of jettisoning hundreds of career criminals onto our streets in a Mariel boatlift of sorts, with the predictable crime wave to follow resulting in the death of an innocent citizen at virtually any moment, threatens to turn him into Michael Dukakis on steroids – that alone might well be enough for a GOP candidate of quality to bring him down.

But who is that candidate? John Kennedy’s descent from the Senate to challenge Edwards for governor is as likely a possibility now as it’s been ever since Kennedy was sent to Washington last year, but there appears to be a growing sense among insiders that Kennedy running for governor in 2019 is a bridge too far – at least one prominent donor has apparently declared he won’t support Kennedy for governor because he runs too often for too many offices. In no other state do politicians run for governor after being elected to the Senate; if Kennedy were to do so it would mark the second time in successive gubernatorial cycles that a Senator has done so here. It didn’t work out so well the first time.

Earlier this week the Ralph Abraham train began fueling for a trip out of the station and it appears obvious the 5th District congressman will make a run. Abraham’s preparations are farther along than most people realize; earlier this year he had Agriculture Commissioner Mike Strain, whose name had been thrown around as a potential candidate, take him around the state on an agricultural listening tour – and the results were highly productive for Abraham.

The real question seems to be what Jeff Landry will do. Louisiana’s Attorney General, who has spent his first two years in office serving as a major thorn in Edwards’ legal side, has done perhaps more than anyone to prepare for a gubernatorial run, but Landry has some negatives to overcome in this cycle and most prominently he’s Public Enemy Number One among the state’s trial lawyers. Given that he’d have to give up what’s a fairly safe seat in order to run for governor, Landry might well decide that his role in the gubernatorial election is that of kingmaker. If he aligns himself behind an Abraham and against Kennedy – which wouldn’t be out of the question, as Landry’s camp is still steaming over Kennedy’s vacillation on the Kyle Duncan judicial nomination – it might well be a signal to Kennedy that standing pat in that Senate seat is the smart play, and at that point there could well be a functional clearing of the field in order to have that one Republican challenger to Edwards.

But this is a multi-act play, and things are far more complicated if Scalise is written out of the script as the protagonist due to his chances of becoming House Speaker. For those of us who saw Scalise as the state’s potential political redeemer, it’s a bittersweet realization he might have bigger fish to fry on Capitol Hill.