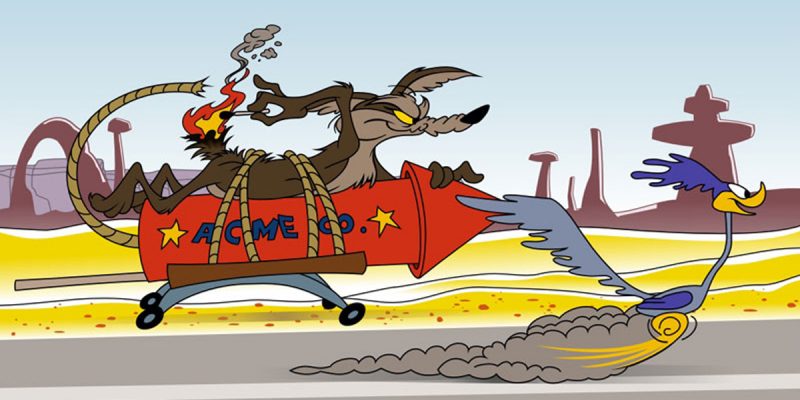 I am not sad that Roy Moore lost this week’s Alabama Senate race, though I am not happy Doug Jones won.

It was the worst of choices.

The Republican establishment overplayed their hand, carpetbombing a credible conservative (Mo Brooks) and pushing a tainted candidate in Luther Strange into a runoff with Moore.

Surely the smug and too clever GOPe could not lose this matchup once the real enemy (Mo Brooks, not Doug Jones) was vanquished.

It was an elaborate political scheme worthy of Wyle E. Coyote and just as self-destructive as the Acme line of products the Road Runner’s nemesis favored.

As Moore’s alleged penchant for dating teenagers back in the 1970s conveniently did not come out until after the party primary, the Ten Commandments judge was a lock to win.  Brooks voters were not going to “fall into line” behind the machine that pounded them into the ground.

After that inevitable another inevitable played out when the sky opened up and the Washington Post’s corps of reporters fell on Alabama.

Moore rejected the allegations that he had relations four decades ago with teenagers back when he was in his thirties and responded to the stories by declaring “We are in a spiritual battle.”

That response made Roy Moore the candidate look more like Jim Bakker the Televangelist, trying to pray away the controversial sex stories enveloping his candidacy.  Perhaps he should have opted for the Jimmy Swaggart play instead.

One consultant aligned with Moore lamented how disjointed his effort was, between the unwise media messaging to his frequent disappearing acts from the campaign trail.

At times it appeared Moore was as dead-set on losing as Jones was determined to win.

Moore was all cowboy hat and weird vest and no cattle.

Instead of making his party’s caucus members feel uncomfortable in the US Senate, Roy Moore can gallop off on his traditional “election day” horse and ford over to the Island of Misfit Conservative Candidates.

Residents of said place include the amateur female biological theorist Todd Akin (who managed to lose TWO senate seats, his own race in Missouri and one by extension in Indiana), Christine O’Donnell (I am not a witch!), Sharron Angle (no commentary needed), and Rick Berg (who did the political equivalent of striking out in tee-ball in North Dakota the same day Mitt Romney carried the state by 20 points).

The GOP establishment might take satisfaction in the loss, but they won’t benefit from it.  Republican voters rejected them by the tens of millions in 2016 and they’re not looking back.

John Kasich and Mitt Romney will continue making the argument that the patriotic thing to do is to undermine Republicans and by default elect liberal Democrats; they and their cohorts should be made to own the policies that may follow victories by the Left.

And in the case of Romney he probably signed a few of them into law during his time as governor of Massachusetts.

And while the Beltway crowd did everything in its power to create the “false choice” in the Republican primary, at the end of the day conservative voters have to own the debacle.

They had a choice and they reached for the shiny object instead of grasping the more mundane sure thing.

The social conservative cause was betrayed and its evangelical advocates publicly embarrassed by the latest inept representative to stumble out of the clown car.

Not all Democrats are pleased with the election results as irrelevant people make for ineffective villains.

Republicans lost a safe senate seat while the Democrats watched a golden goose of a piñata go up in flames.

The media, though, got what they wanted- after watching a series of competitive federal races barely break the GOP’s way since Donald Trump took office, they finally got their first big “party flip” story to push their “Trump setback” narrative that has been sitting in storage since Kansas.

Granted up until this point the race was not framed about a referendum on Trump (which would have been to Moore’s advantage) but whether Alabama voters would elect a “pedophile” to the US Senate.

If Moore were truly the victim of the most elaborate establishment media smear job in the history of American politics, the country is looking at some very dark days ahead.

But if Moore was dishonest in his defense and tried to conceal his sins under the cloak of Christianity, then he may have to pay a more serious price than losing an election in the next life.

Interested in more national news? We've got you covered! See More National News
Previous Article Nazareth, Home of Jesus, Closed for Christmas
Next Article Well, The Scalise For Governor Fantasies Were Fun While They Lasted…