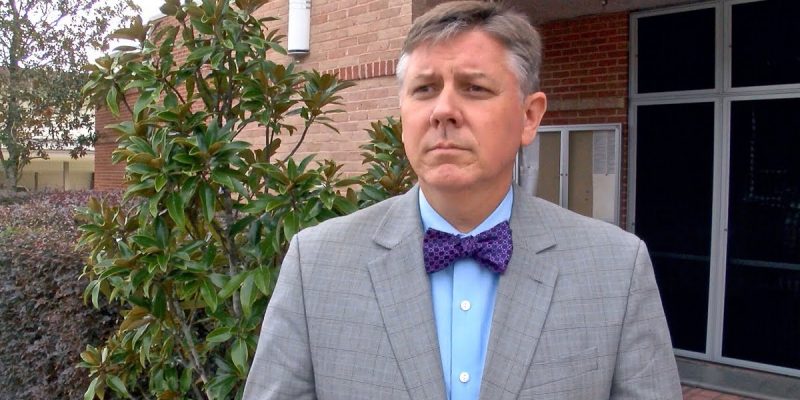 Jeremy Alford at LAPolitics.com had an interesting bit of scoop this morning on Chris Broadwater, a key member of the Louisiana House of Representatives who called it quits on Friday…

Broadwater sent a letter to his colleagues in the House and Senate waxing quite philosophic on his reasons for leaving. Here it is… 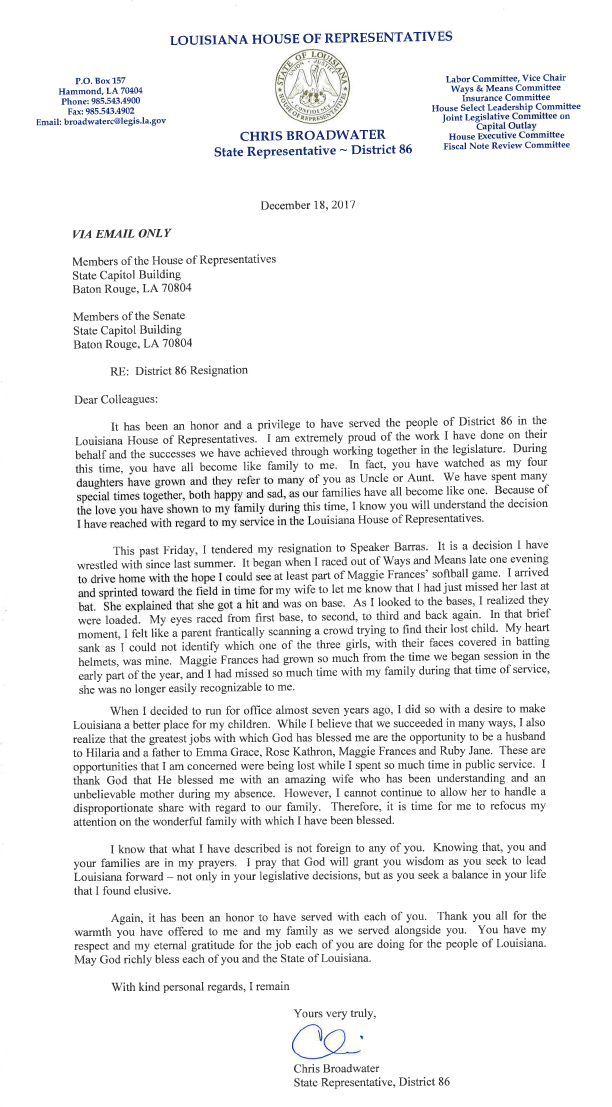 The old “resigning to spend more time with my family” thing has long since become a cliche’ for a cover of a forced resignation or a firing or a patina to paper over a scandal, and when Broadwater used it in this letter it sent lots of insiders and gossip-mongers chasing around to find out what kind of juicy scandal is shortly forthcoming about the Republican lege from Hammond.

That said, Broadwater is one of the more upstanding legislators Louisiana has from the standpoint of personal ethics. We’d be very surprised if there was some sort of sex scandal or illicit activity behind this resignation.

Our theory is it has a lot more to do with politics, and with what’s coming in the Louisiana legislature, and the position Broadwater would be in if he’d stayed in the legislature.

The thing to remember is that Chris Broadwater is the state representative from Hammond, and he’s also a Republican. Hammond is thelargest city in Tangipahoa Parish, which is run more or less as a fiefdom of the Edwards family. The governor’s brother is the sheriff there, and the Edwards family populates the courthouse mob in Tangipahoa like no other political dynasty in Louisiana since the Perezes rode herd on Plaquemines Parish in the bad old days.

As such, Broadwater had little choice but to serve as a conduit between John Bel Edwards and the Louisiana House of Representatives. Had Edwards played his cards right, that could have made Broadwater an indispensable, valuable deal-maker in the legislature. By all rights after the governor was elected, Broadwater should have been the Speaker of the Louisiana House of Representatives – Republicans would have had a Republican Speaker, but Edwards would have had a measure of control over the body by having a Speaker over whom he would have had influence in a similar manner to John Alario as the Senate President.

But Edwards made a major mistake by demanding a Democrat Speaker of a Republican House, and Broadwater was therefore put in a position which ultimately became untenable. Especially when last year the governor attempted to engineer a coup to get rid of current Speaker Talyor Barras with Broadwater as the beneficiary. Broadwater wouldn’t play along and lead the coup, which we’re told led to a worsening of the relationship between him and Edwards.

That history becomes of paramount importance heading into next year, because everyone expects Edwards to call a special legislative session before the regular one starts in March, and that special session will likely be dedicated to hot-boxing House Republicans into accepting tax increases to solve Louisiana’s sizable budget deficit. There is some degree of acceptance among those Republicans for maintaining the current level of sales taxes, which are the highest in the country but haven’t generated scads of angry phone calls from their constituents, but as to any of Edwards’ other tax-hike ideas there will be fierce resistance.

And we know that Edwards’ response to the House’s revolt against his tax increases last year was that coup he attempted to engineer.

In fact, a story we heard last year was that at the height of the talk about the coup Broadwater went to Barras and suggested he be removed from one or two of his committee assignments as “punishment” for the supposed coup he refused to participate in. The thinking was that by “punishing” Broadwater Barras would be making a public show of strength and this would tamp down the buzz about the coup. Barras rejected that idea, gambling that there weren’t sufficient numbers to make the coup happen and trusting Broadwater wouldn’t stab him in the back. Barras’ judgment was correct.

It’s relatively easy, therefore, to recognize something it’s unlikely anyone involved will admit to. Namely, that Edwards has been pressuring Broadwater to participate in another coup attempt, and Broadwater resisted, and as a response to the pressure he’s doing the only thing he can do – he’s falling on his sword and removing himself from the equation. Now the governor doesn’t have a credible alternative to Barras to present, and there can be no coup.

Broadwater’s seat is now up for a special election in February, and qualifying begins Jan. 1. That special election will likely be a barometer of sorts on the political future of Louisiana – because if an anti-Edwards candidate should win Broadwater’s seat it spells doom for the governor’s political agenda. You can bet that Edwards will do everything he can to find a Republican more malleable than Broadwater to run in District 86, because it’s a life-or-death issue for him.