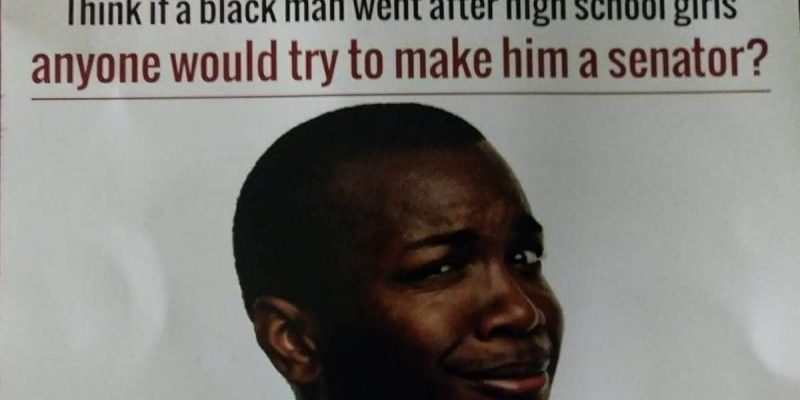 Yes, you say. We already knew this. But what’s entertaining about the above is it’s copied from a headline of a post at The Root, a black-focused website, discussing the latest, and one would think last, dying breath of the Doug Jones campaign in Alabama – which most would say is also trash.

And why is the Democratic Party trash? It concerns a mailer. The Washington Free Beacon…

Democratic Rep. Terri Sewell (Ala.) dodged a question Sunday on whether she believed the racially insensitive mailer released by Alabama Democratic Senate candidate Doug Jones’ campaign was wrong, but then later admitted that it was a mistake.

ABC’s “This Week” host Martha Raddatz said she wanted to get Sewell’s reaction on the mailer, citing a local African American voter who told a local news outlet that he would not be voting in Alabama’s special election because it was a “complete slap in the face.”

“Think if a black man went after high school girls anyone would try to make him a Senator?” the mailer read.

Vice News reporter Alexandra Jaffe posted a picture of the mailer on Twitter.

Per @AlxThomp — Doug Jones camp is sending out this mailer in Alabama #ALSen pic.twitter.com/U3LMN7kNPw

Why is this a mess? Why does it make “trash” of the Democratic Party?

Well, Michael Harriot at The Root, who presumably knows a little more about how black people think than Jones’ hack consultants do, gives us the benefit of an explanation…

Someone, probably a white man, thought that the image would resonate with black people and motivate them to get out the vote. It’s as if black people were considering voting for the child molester until some brilliant strategist posited, “What if he were black, though?” The flyer is reductive in its oversimplification of the black mind as only caring about black issues. While it might not be racist, it is certainly racist adjacent.

It is also the Democratic Party.

Part of the reason the Democratic Party has been marginalized as a party that only exists on the coasts and in urban areas is white-mannery like this. While the policies of the party may be more progressive and black-friendly, the Democratic leadership is often as prejudiced and shortsighted as its Republican counterparts, and next week’s Senate election is the perfect example.

Until the stories surfaced about Roy Moore’s predilection for prepubescent ponytail wearers, the Democratic Party had wholly abandoned Alabama. It treated minorities and Democratic-leaning whites in the South like every black character in horror movies: necessary casualties left behind for the greater good.

The party only campaigns in already-Democratic strongholds for the scant few electoral votes during presidential elections, and the rest of the time it ignores them completely.

On the rare occasions when the Democratic Party does address black voters, it only talks about the “black issues”: policing, mass incarceration, civil rights, etc. For the party leadership, black people aren’t whole people who have the same concerns about taxes, job creation, education initiatives, international policy and economics as other voters. They are simply bodies collected in the coffers of the party’s ineffective longing for power.

Maybe it’s because, like most reasonable, thoughtful Alabamians, I really want Jones to win—and believe me, scandal or not, his victory is far from guaranteed. This state is redder than the bottom of Cardi B’s shoes, after all. But Jones’ campaign has done such a poor job speaking to the black community that my passion has fizzled. Severely. And this isn’t a new predicament. WashPo and other news outlets might now just be picking up on the trend, but black voters have long been discouraged.

I appreciate what Doug Jones did in prosecuting KKK members in the deaths of four innocent girls. But when that’s the one and only message of black interest coming from your campaign, it shows an extreme disconnect.

We’re more than civil rights. We’re bigger than fish fries. And we want to be heard.﻿

The rest of Harriot’s piece is a descent into the same post-2016 harangue about how Republicans are white supremacists and so on, but he does make the point that lazy messaging like that of what’s on Jones’ mailer is a pretty good avatar for why the Democrats have lost Middle America and can’t win elections outside of safe districts (there’s a lot of talk about a resurgence for that party due to Trump’s unpopularity; none of that has shown up in any major elections outside of the Virginia gubernatorial race, and Virginia is a pretty safe blue state now anyway).

The problem with Harriot’s reasoning, though in the main he’s likely correct, is that until black voters actively turn away from Democrats as punishment for being patronized to in this way, the patronizing won’t stop. And while Jones is likely headed for a loss in tomorrow’s election – the RealClear Politics average has him down 2.5 points as of today and save for a Fox News poll that came out this morning which has Jones with a 50-40 lead and appears to be a serious outlier, Moore has been ahead in every poll since the end of November – there is no serious expectation on anyone’s part that Jones won’t get 90 percent of the black vote or more.

And unless black people start putting their votes up for grabs and demanding results from the people they vote for – which includes giving credit to Republicans when the black community happens to benefit from Republican governance – nothing is going to change. Harriot might understand this, but only within the context of being a voter who’ll never stray from the “trash” party no matter how much he might despise it, and that means he’s screaming in a vacuum.

As for the GOP, it’s better than the Democrats – but only slightly. Trump might be unpopular but he’s schooling his party’s establishment on how to fulfill promises it’s made for decades, and you’d think that record would make them see him as an asset. Instead, they’re finding ways not to include a legislative record to go with his executive actions and foreign policy success, and in so doing missing a major opportunity to change the country in a way which would all but finish the Democrats off.

Voters in Alabama apparently see this, which is why Moore, whose social positions aren’t exactly in vogue and who’s rather alarmingly prone to making gaffes, looks destined for a seat in the Senate following a host of allegations we’ve already discussed which almost veryone though would kill his campaign. He beat the establishment Republican in the race despite Luther Strange having all the advantages, and he’s surviving those allegations against Jones, for the simple reason that those voters want that agenda passed and they see Moore as a man who’ll deliver them.

Harriot does get this. What he doesn’t get is that the agenda which he disparages as white supremacist actually delivers better results for the black community than anything the Democrats have on offer. And while that might precipitate a round of head-shaking by conservatives of all colors, if nothing else we can derive some amusement from the crashing and burning of the “trash” Jones campaign.