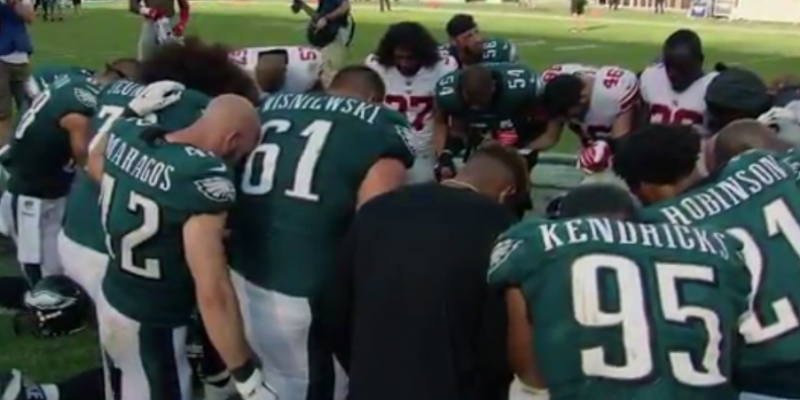 The “binding force,” that holds several of the NFL Philadelphia Eagles team members together is their saving faith in Jesus Christ, according to recent news from the team’s website.

This incredible short video reveals the genuine faith in of Eagles teammates in God, and their trust in each other. Three teammates share their stories of how they came to faith, and how they ended up playing in the NFL: Torrey Smith, wide receiver; Carson Wentz, quarterback; Chris Maragos, safety.

Their testimony offers a glimpse of what true belief in Jesus Christ looks like. They came to faith after reading the Bible. When their separate journeys led them to the NFL and to the Eagles, they found a way to share their faith with their teammates and others at the NFL.

Several nights a week they host couples and individual bible studies. They meet weekly to offer encouragement to other players through prayer and bible study. Members who’ve come to know the Lord are baptized in front of their teammates.

Their story is truly amazing– and one that needs to be told– Jesus does exist in the locker room. And in the hearts and minds of players who share something universally greater, and eternally more important than the game itself.

The video can be watched here. Here’s the audio of their interview:

Spread the word– there’s actually good news in the NFL and a team worth watching and rooting for whose players lead by example.