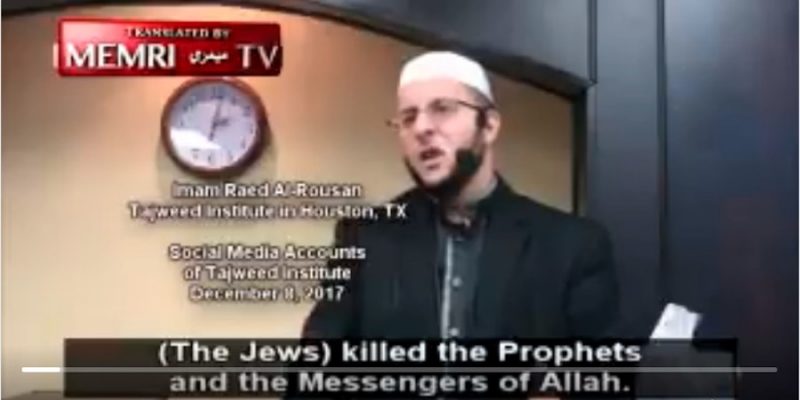 Yes, an imam in Houston called for Muslims to kill Jews in his holiday-timed sermon. Raed Saleh Al-Rousan, of the Tajweed Institute (an organization that promotes Islamic proselytization based in Florida) leads a small, new congregation in Houston. In a recent “good tidings” sermon, Al-Rousan affirmed what all Muslims believe, and is taught in the Qur’an: Muslims will kill Jews on Judgment Day. (But they don’t have to wait that long; killing Jews is preferable now. Jews are “Satan in human form.”)

He also argued that the British brought Jews to the land that is now the called Israel, and passionately exclaimed, “Do not tell me that Palestine is the country of the Jewish people.” (Bethlehem, in the West Bank of occupied Palestinian territory, is where Jesus was born, roughly 640 years before Muhammad invented Islam.)

Houston Imam Raed Saleh Al-Rousan: 'Good Tidings' – Muslims Will Kill Jews On Judgment Day; 'Do Not Tell Me That Palestine Is The Country Of The Jewish [People]' pic.twitter.com/hK6EGuOyaw

After his sermon made headlines, Al-Rousan didn’t apologize and said that he didn’t mean “to incite violence.” Then of course, in classic taqqiya, he made this statement:

I unequivocally affirm and uphold the dignity, sanctity and value of all human life, including – of course – people of the Jewish faith. I must also state in no uncertain terms that I am absolutely and completely opposed to and disgusted by all forms of terrorism, all terrorists, and I oppose anyone who would commit, call for, or threaten violence against civilians. This is why as a person of faith and a religious leader, that I am mortified that an impassioned sermon I gave in light of President Trump’s Jerusalem declaration is being seen as a call for the very things I despise.

The Anti-Defamation League (ADL) condemned his remarks, which were translated into English and posted online by the Middle East Media Research Institute. Gilad Katz, the Israeli Consul General for six states including Texas, called Al-Rousan’s sermon “racist” and “hateful.” Katz said: “We should not be tolerant towards hatred. Hatred should be met with a very strong fist of the law, and should be dealt with seriously.”

Dayan Gross, the regional director for the Houston ADL chapter told the Houston Chronicle that Al-Rousan should apologize to the Jewish community and “through future actions, demonstrate he is committed to understanding why the sermon was an incitement to violence.” He added that Al-Rousan “doesn’t fully understand the ramifications of his sermon.”

That is an understatement. To learn more about what the Qur’an teaches about Jews, Christians, and all non-Muslims, go here.