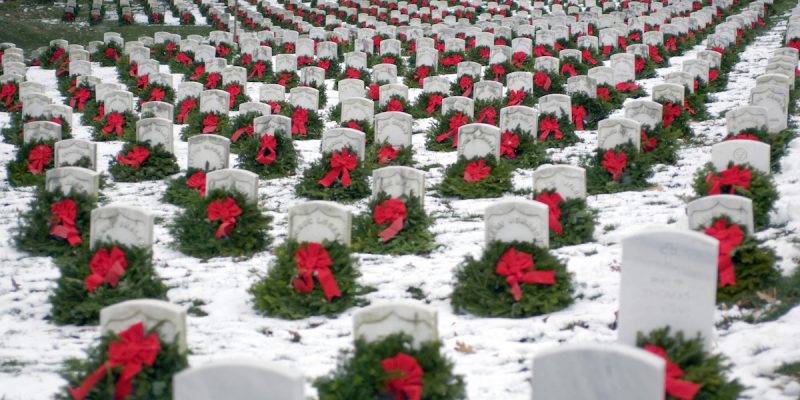 This year Wreath Across America Day is December 16th, a day to honor the fallen members of the U.S. Military. Coordinated wreath-laying ceremonies will take place at Arlington National Cemetery and more than 1,200 cemeteries in every state, at sea, and abroad.

Wreaths Across America began in 1992 after one man chose to honor the veterans buried at Arlington National Cemetery. By 2007, a non-profit organization was created to expand this public honoring of fallen heroes across America. Local veterans and civic organizations work together to encourage participation of younger Americans and teach them about their freedoms made possible because of the sacrifice of those buried.

Last year, Governor Greg Abbott and his wife laid wreaths at the graves of three Medal of Honor recipients buried in the Texas State Cemetery: Brigadier General Robert Galer, Sergeant Jason Logan and Second Lieutenant George O’Brien. All of the nearly 3,000 graves at the Texas State Cemetery were covered in wreaths– placed by the many volunteers who came to show their respect for America’s fallen heroes.

This year, volunteers will lay millions of wreaths on graves nationwide. To participate Americans can sponsor wreaths, volunteer to put together or recycle wreaths, help deliver the wreaths, or participate in a wreath laying ceremony. The First Lady of Texas aptly remarked,

While we can never say thank you enough, participating in Wreaths Across America Day is just one way that we as Americans can come together to honor the lives of those who gave the ultimate sacrifice.

To learn of ways to participate on Wreaths Across America Day, visit:  www.wreathsacrossamerica.org.