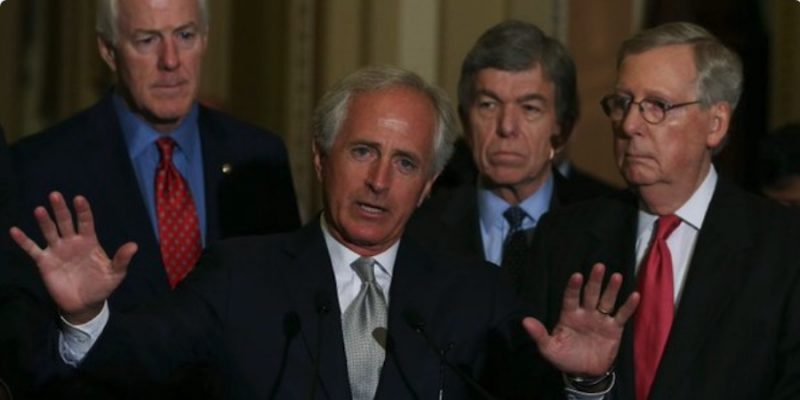 According to IBT, Texas Sen. John Cornyn’s amendment, which was introduced just hours before the U.S. Senate passed the tax bill on Dec. 2 includes an obscure tax break for pipeline giants “that potentially helps 16 of his congressional colleagues.” IBT writes:

Together those 16 lawmakers — 13  Republicans, three Democrats — own multimillion-dollar stakes in the special investment vehicles that stand to benefit from Cornyn’s amendment. They include three of members of the Texas Congressional delegation: Sen. Ted Cruz and two top Republicans in the U.S. House.

More importantly, Conryn even told ABC News that his amendment benefitted members of Congress in order for them to vote for the bill:

BREAKING: Sen. @JohnCornyn tells @ThisWeekABC that last-minute provision enriching @SenBobCorker & other GOP lawmakers was added to the tax bill as part of an effort to “cobble together the votes we needed to get this bill passed” https://t.co/5spNBNb8Vl

In other words, in order for Sen. Bob Corker from Tennessee to vote for the bill, he had to be assured that he would profit from it financially. IBT explains in detail how it works, some of which is highlighted below:

The Cornyn amendment provides a tax deduction for investors in what is called an energy-related master limited partnership (MLP), which are primarily used by oil and gas pipeline corporations.

Federal lawmakers collectively own between $4.6 million and $10.6 million worth of energy-related MLPs, according to personal financial disclosures reviewed by International Business Times. Thirteen of the 16 lawmakers who own stakes in energy-related MLPs are Republicans. All 13 of those lawmakers voted for the tax bill in their respective chambers.

Congress’s top stakeholders in the MLPs are all Republicans — they include Michigan Rep. David Trott (up to $4.4 million), New Jersey Rep. Tom MacArthur (up to $2.3 million), Georgia Republican Sen. David Perdue (up to $1.25 million), Texas Rep. Pete Sessions (up to $550,000), Texas Rep. Kenny Marchant (up to $477,000) and Texas Sen. Cruz (up to $300,000). The tax provision could prove particularly lucrative for lawmakers, because their holdings can generate significant annual income — as one example, Cruz in 2016 listed more than $11,000 in earnings from his stake in one fossil fuel MLP.

The last time Congress addressed tax reform was in 1986. The law at the time limited which businesses could form MLPs. Those that could were primarily in the oil and gas business.