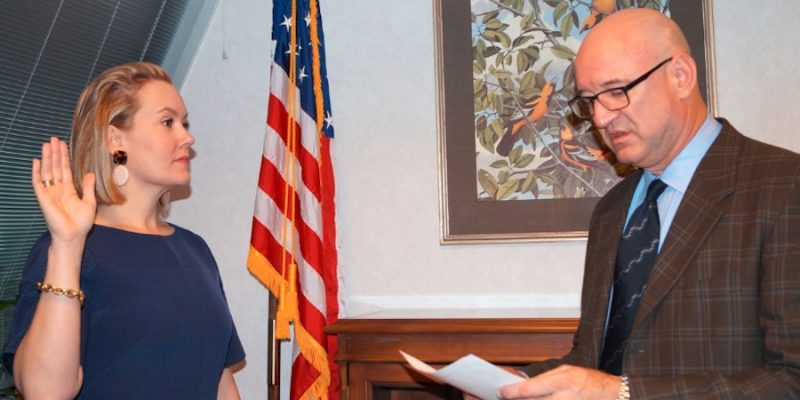 This morning, our new Regional Administrator, Anne Idsal, took her oath of office. Congratulations, Anne, and welcome to the EPA! pic.twitter.com/RoAgKoMjp6

Idsal is a third generation Republican whose family ranch is the infamous location where Vice President Dick Cheney accidentally shot Harry Whittington on a dove hunt in 2006. At the time, her mother, Katherine Armstrong, served under George W. Bush on the Texas Parks and Wildlife Commission. Before her mother, Idsal’s grandmother, Anne Armstrong, served as an ambassador to the U.K. under President Ford.

After graduating from Baylor Law School in 2010, Idsal joined the Texas Commission on Environmental Quality as assistant general counsel, then became the chief clerk for George P. Bush at the General Land Office. She was sworn in as the EPA South Central Region 6 administrator on December 18, 2017. Region 6 includes Arkansas, Louisiana, New Mexico, Texas, and 66 tribal nations.

The 34-year-old, who looks much older than her age, is following the lead of EPA Administrator Scott Pruitt, who is implementing the deregulatory agenda of President Trump, which includes reversing Obama-era bureaucracy,  easing penalties, and opening up federal land for drilling for natural resources. Pruitt’s position on climate change is that it’s a  “debate that is far from settled.”

Idsal told the Texas Observer that there is “still a lot of ongoing science” and that the “climate has been changing since the dawn of time, well before humans ever inhabited the Earth. I think it’s possible that humans have some type of impact on climate change. I just don’t know the extent of that.”

Pruitt and Idsal are right. In fact, scientists have been debunking “climate change” and “global warming” for decades.

I would like to see the public look upon global warming as just another scientific controversy and oppose any public policies until the major issues are settled, such as the cause. If mostly natural, as NIPCC concludes, then the public policies currently discussed are pointless, hugely expensive, and wasteful of resources that could better be applied to real societal problems.

Not to mention the fact that the majority of scientists don’t support the human-caused global warming theory. As Forbes reported:

Only 36 percent of geoscientists and engineers believe that humans are creating a global warming crisis, according to a survey reported in the peer-reviewed Organization Studies. By contrast, a strong majority of the 1,077 respondents believe that nature is the primary cause of recent global warming and/or that future global warming will not be a very serious problem.

Who can forget when Al Gore warned in 2009 that the North Pole “could be completely free of ice by the middle of the next decade”? (That didn’t happen.)

Or, when Gore inaccurately cited a study at a climate talk in Copenhagen (that was criticized by climate scientists)? He claimed that there was a “75 per cent chance” that the Arctic “could be ice-free in the summer months” within 5-7 years. That didn’t happen– and the author of the report debunked Gore’s claim. Dr. Maslowski, of the U.S. Naval Postgraduate School in California, told The Daily Mail, that his research “revealed ‘nothing of the sort’.”

Then, there is the U.K. high court ruling in 2007, which claimed that Gore’s Oscar-winning documentary, “An Inconvenient Truth,” was ‘alarmist’ and contained nine scientific errors.

There is also the high-level whistleblower, Dr. John Bates, from the National Oceanic and Atmospheric Administration (NOAA) who told the Daily Mail of a faulty NOAA report devised before the Paris meeting on climate change. The Mail reported that NOAA “breached its own rules on scientific integrity when it published the sensational but flawed report, aimed at making the maximum possible impact on world leaders including Barack Obama and David Cameron at the UN climate conference in Paris in 2015.”

The Mail wrote what Dr. Bates revealed was “irrefutable evidence that the [NOAA] paper was based on misleading, ‘unverified’ data. … It was never subjected to NOAA’s rigorous internal evaluation process – which Dr Bates devised.”

Numerous additional examples exist. And Idsal’s position is consistent with what is being revealed as a decades-long political agenda pushed by globalists that has nothing to do with “climate change,” or “global warming.”