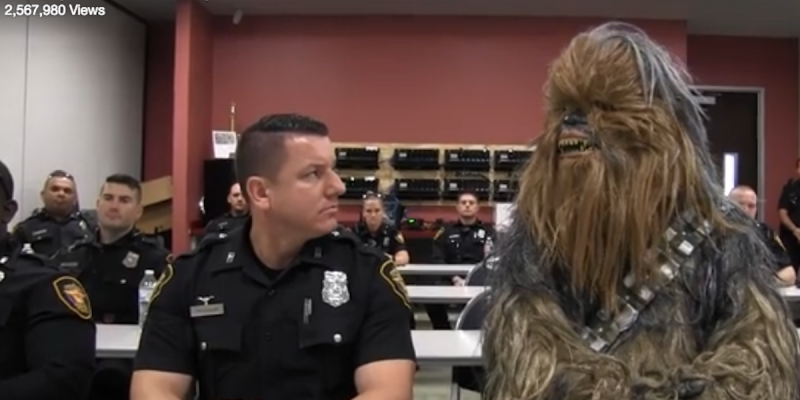 Chewbacca Joins the Forth Worth Police Department.

One of the main characters from the legendary movie Star Wars, Chewbacca, is helping recruit new members to the Fort Worth Police Department.

We know things have been tough for Chewbacca lately. We hoped that we could find a place for him within our Department. Did it go well? You decide.

Posted by Fort Worth Police Department on Wednesday, November 29, 2017

In a new recruiting video posted by the Fort Worth Police Department, the officer in charge instructed another officer Jimmy, to: “You get the Wookiee.”

Jimmy asked: “I’m sorry. Did you say the rookie?”

“No. The Wookiee,” the officer said. He was refurring (no pun intended) to the furry recruit sitting next to him: Chewbacca.

Chewbacca joined Jimmy on patrol and in one routine traffic stop Chewbacca ended up shaking a woman’s car. Chewbacca’s experience at the firing range and in combat training didn’t go so well either. Chewbacca was also upset at lunch, even though Jimmy tried to console him. At the end of the day Chewbacca made a mess in the shower and his fur clogged the drain.

Despite the challenges Chewbacca was a trooper. (Again, no pun intended.) Jimmy was a great partner and will help him become a valuable member of the team.

The department ended the video with words scrolling the screen in classic Stars Wars style:

Welcome to the Fort Worth Police Department!

Remember to always show courtesy and respect to our citizens and always provide professional service.

So far the video has become a hit and had more than 2.5 million views on Facebook alone.