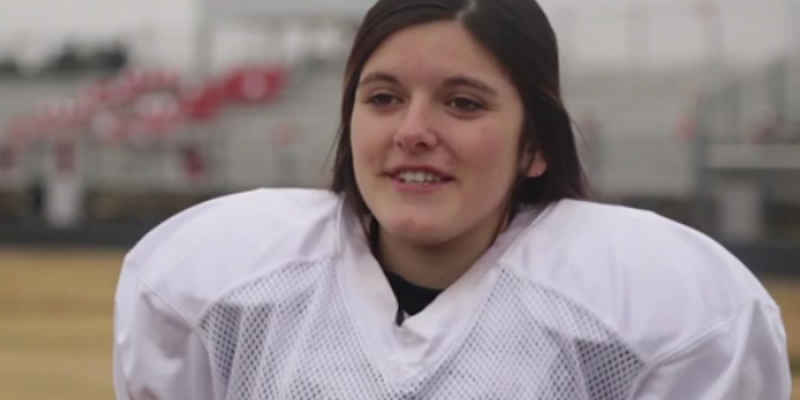 The Strawn High School Greyhounds are making history today– not simply by going to the Texas State High School Football Championship– but because of who their kicker is: a teenage girl.  K-Lani Nava is the first girl to play in the state championship.

No, she is not a transgender boy pretending to be a girl. She is a teenage girl who wanted to play football and earned her spot on the team.

K-Lani Nava is a five-foot two and a half inch kicker for Strawn High School, located just west of Forth Worth, Texas, and is playing for a state title today at AT&T Stadium. Kick-off starts at 2 p.m.

Nava tried out as a freshman to be football team’s kicker. Strawn’s football coach, Dewaine Lee, didn’t deny her the chance. And, it turns out she is pretty good. Lee said:

“We’re all about letting kids try stuff. If a kid wants to do something we always try to be flexible and help out. She said, ‘Coach, I want to kick.’ And I said, “Well, come and try it out.”

Now a senior, Nava has proven that she can kick. And not just in football. A former soccer player, Nava earned three letters on the varsity team and is “a key contributor to the Greyhounds’ bid for a third UIL six-man state title.” The Star-Telegram reports:

State No. 1 Strawn faces No. 2 Balmorhea in the Class 1A Division II Six-Man championship game on the biggest stage, Arlington’s AT&T Stadium, where there regularly are more people in line at the concession stand than the town’s entire population of 653, give or take.

Nava’s personal kicking coach, Brent Grablachoff, said she “was serious about doing whatever it took to improve. She put a lot of time and hard work into training with us. She’s blossomed nicely. She went from being a C-plus level kicker to a bona fide B-plus to A-minus kicker.”

Grablachoff said he witnessed Nava kick a 48-yard field goal at a camp this summer in Austin.

Nava says that her teammates were a “little iffy,” at first. “They just thought I was not going to be able to do it. But there was one game I proved myself to them, and they accepted me immediately.”

Nava has kicked as many as 10 extra points in a game. Let’s hope she can help her team kick some extra points to win the championship.